Slate’s Jacob Weisberg and author of a new book, The Bush Tragedy, reveals how Bush cannot always distinguish between what he wants to see and what is there to be seen. 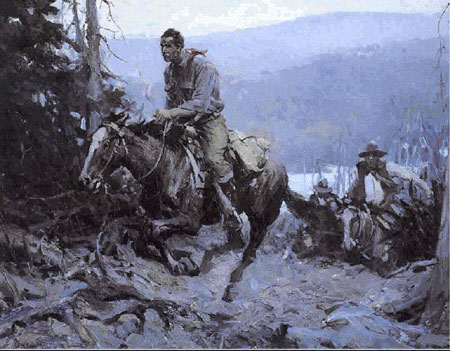 A Charge To Keep W.H.D. Koerner

Texas Governor George would describe the painting, A Charge To Keep, hanging on his office wall to visitors Like this: “I thought I would share with you a recent bit of Texas history which epitomizes our mission. When you come into my office, please take a look at the beautiful painting of a horseman determinedly charging up what appears to be a steep and rough trail. This is us. What adds complete life to the painting for me is the message of Charles Wesley that we serve One (sic) greater than ourselves.” Visitors often remarked how Bush resembled the lead rider; no surprise that it should later become the title of Bush’s autobiography, the Christian cowboy with a “Charge To Keep.”

The fact that Koerner had painted a horse thief “riding it like he stole it” had eluded young Governor George. After all, to a mind like George’s, bereft of facts and curiosity, context is whatever you make it; and no stream rises any higher than its source, no matter what kind of pressure or control you care to use.

This, as you might guess, is not George Boosh’s favorite painting. His name for Picasso’s Guernica is, “The Party So Fun They Invited A Horse.” The long hollow corridor his new title creates in my mind causes a queasy apprehension to move down that empty hall of doors, shaking all the knobs as it goes, trying to escape into some safe room away from the realization George Bush is as vapid a dullard as we could possibly have found to have a beer with in the people’s house.

And as Bush’s fratricidal party draws to a close, recession looming, our soldiers still dying, government still spying on it’s own people, no one held accountable, we can grope our way forward in the deepest darkness before the dawn with a fierce resolve, that we shall never so forget ourselves again that we entrust our nation’s charge to another colossal horse’s ass. The dawn of a brand new day— it cannot come fast enough.