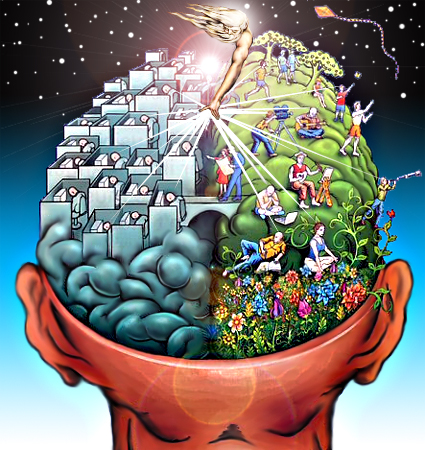 There’s a fascinating article by Amanda Marcotte at PANDAGON, “My hands are mine, but my feet are my sister,” which recounts a most unusual anomaly among the naturally occurring vagaries of human gene blending. In the process of unfolding that amazing story, she somewhat tangentially observes:

I don’t truck with the more superstitious need to have individuality strongly defined in religious or biological terms—a person is a social construct that I think is best defined around the concept of the lived experience of having your consciousness and your body and your memories.

Before we unpack that. SNL’s Dana Carvey’s “church lady” used to disparage the justifications of her guests (sinners all), which inevitably ran counter to the church lady’s dogma, with a short and cynical: “How convvveeeenniennt.”

Now however convenient it may be to relegate personality to being merely a “social construct” of “lived experience”— let’s be clear: that’s a statement about personality; but it is nothing near a definition of what it fundamentally is. And “individuality”— identity— is by no means merely synonymous with personality to begin with. Nor is there anything inherently “superstitious” in defining individuality as uniquely personal in a religious or biological context. Science lacks just as many facts about personality as religion does. I’m not just sayin.’

As “individuals,” we experience— we are— our personalities, 24-7. Yet most of us would readily admit living almost completely in the dark in terms of understanding just what our own “personality” fundamentally is.

That is so, because personality is a mystery of genuine cosmic proportion, and probably always will be. But our general paucity of understanding regarding what actually constitutes our “personhood” notwithstanding, there are a few things that can be observed about personality, things that have nothing to do with DNA, the material instructions of spirit designed to produce intelligent creatures of will dignity in a living, breathing, self-conscious, spirit-indwelt bipedal organism.

Personality, in the supreme sense, is the revelation of God to the universe of universes.

God is personality. And personality, in the supreme sense, is the revelation of God to the universe of universes. While such claims immediately throw the discussion into the realm of faith as well as scientific fact, it is still no less true that we each have a factual experience of our own unique and mysterious personality to marvel at, to analyze, to ponder any way we choose. Even a scientist can come to appreciate the difficulties inherent in discussing something so universally observable, yet at once so obviously non-material.

A significant problem surrounding an intelligent examination of personality by secular science is this: Science persists in the assumption that man’s intellectual and philosophic endowments emerged from increasingly lesser intelligences the further back they go; finally taking origin in primitive life, which was utterly devoid of all thinking and feeling— which in turn, supposedly emerged from electro-chemical molecules, which supposedly emerged from— nothing at all. (Such a meaningless “standard” of proof certainly calls into question any attempt to discount personal religious experience on grounds of credulity.)

Thus scientific secularism— and atheism, for that matter— has gone bankrupt when, in the face of each and every recurring universe phenomenon, it refunds its current objections by referring what is admittedly higher back into that which is admittedly lower. If reason is worth anything as proof of something, then a reasoned consistency demands the recognition of the activities of a purposive Creator— it simply cannot rely on the imaginary potential of everything— including life itself— spontaneously springing into “reality” from nothing at all.

living energy systems
The personality is neither body, mind, nor spirit; neither is it the soul. Personality is the one changeless reality in our otherwise ever-changing experience; and it has the ability to inherently unify all other associated factors of our individuality.

Body. Our material or physical organism; the living, electrochemical mechanism of evolutionary animal nature and origin.
Mind. The thinking, perceiving, and feeling mechanism of the human organism. The total conscious and unconscious experience. The intelligence associated with the emotional life, which may reach upward to the spirit level through worship and wisdom.
Spirit. The divine spirit that indwells the mind of man— the “Eternal Gift”— by whatever name. This immortal spirit is not personality, though it is destined to become a part of the personality of the surviving mortal creature.
Soul. The soul is an experiential acquirement of the “lived experience.” To the extent a person increasingly chooses to follow the light of what’s true, beautiful, good— over whatever may be second— the indwelling spirit becomes the father of a new reality in human experience. The mortal and material mind is the mother of this same emerging reality. The substance of this new reality is neither material nor spiritual— but it is destined to survive mortal death, and provide the vehicle that can transcend flesh to begin an eternal and personal plan of ascension as a spiritual being.

The supreme value of human life consists in growth of values, progress in meanings, and realization of the cosmic interrelatedness of both of these experiences. And such an experience is the equivalent of God-consciousness.

The nature of personality
Personality is the feature of an individual which we know, that part of them which enables us to recognize and positively identify that person as the one we have previously known, no matter how much she may have changed.

Personality, as a gift bestowed upon a mind-endowed mortal mechanism, confers on a mortal creature the ability to become reactive to the constitutive recognition of three basic mind realities:

Personality is distinguished by two self-manifesting, characteristic phenomena of reactive behavior: self-consciousness, and associated relative free will. Self-consciousness consists in intellectual awareness of personality actuality; it includes the ability to recognize the reality of other personalities as well.

The relative free will which characterizes the self-consciousness of personality is involved in:

Perhaps most mysteriously of all— Personality creates a unique time sense out of insight into Reality, plus a consciousness of presence, and an awareness of duration. Personality is uniquely conscious of time, and this is something other than the time perception of either mind, or spirit.

Length denotes meaning; Length represents direction and nature of progression— movement through space and according to time evolution.

Depth signifies value; Vertical depth embraces our organismal drives and attitudes, the varying levels of self-realization, and the general phenomenon of reaction to our environment.

Breadth embraces insight— the capacity to experience the unchallengeable consciousness of cosmic reality. Breadth embraces the domain of coordination, association, and selfhood organization.

Keepin’ it real
So, my fellow personalities, revel in your absolute and personal uniqueness today, and every day; for it is your infinitely singular point of view that gives you eternal value in the universe— an invaluable and irreplaceable unique presence in relationship to the source of all personality: God.