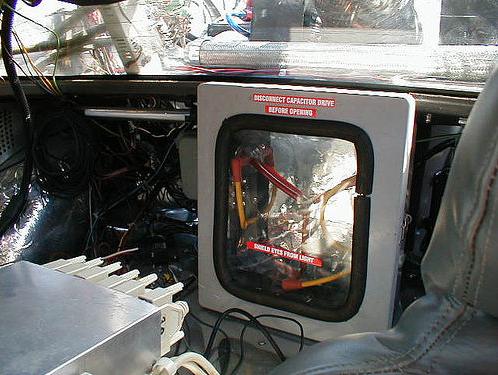 The Flux Capacitor, by Roger Zemeckis, “Back To The Future“

The flux capacitor…was described by Doc as “what makes time travel possible”… The term flux capacitor has become commonly used slang or buzz word for a device whose operation might be too complicated to briefly explain, especially if it fails to operate properly.– Wikipedia 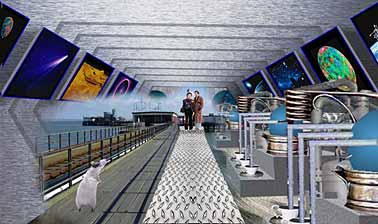 Engine Room of The Heart of Gold, by Roger Smith, “Hitchhiker’s Guide To The Galaxy”

As The Improbability Drive reaches infinite improbability, it passes through every conceivable point in every conceivable universe almost simultaneously. In other words, you’re never sure where you’ll end up or even what species you’ll be when you get there. It’s therefore important to dress accordingly. –Douglas Adams, “Hitchhiker’s Guide To The Galaxy”

The dynamic possibilities of such an engine is believed by psycho-historical-engineers to account for the extraordinary flip flops evidenced by the McCain Campaign this early in the election cycle.

“Apparently, McCain’s Flux Capacitor Infinite Improbability Drive creates a rift in the time-space continuum that confers upon its users an extraordinary ability to make shit up”, said Dr. Strangelike of the Randy Institute.

“As the DoubleTalk Express continues its travels through the time-space continuum, we should expect to see the kind of incoherent comments we heard today from Michelle Bachmann, who commented how species friendly drilling in ANWR would be.”

Dr. Strangelike was referring to these comments yesterday from Rep. Bachmann (R-Minn):

“Some suggestions are that perhaps we would see an enhancement of wildlife expansion because of the warmth of the pipeline…The pipeline has now become a meeting ground and coffee klatch for the caribou.”

Bachmann is not alone among conservatives in pushing this narrative of drilling being good for caribou. Rush Limbaugh said on his radio show last week that “the caribou have multiplied ’cause they like the warmth that surrounds the pipeline.” On Tuesday night, National Review’s Jonah Goldberg made a similar argument on Fox News:

“People don’t realize that at Prudhoe Bay, where they have been drilling for 30 years, the central Arctic caribou herd has increased fivefold since they started drilling up there. Some people say it’s because they get to hide from the bugs. It’s a little easier for them. But people say it’s because of the lack of hunting. But it is not dangerous to the caribou up there.”

Dr. Strangelike mentioned other recent field effects of the McCain Flux Capacitor Infinite Improbability Drive, such as McCain’s $300 million magic battery, his campaign manager Charlie Black‘s statement that another 9/11 style attack on the US Mainland would be “a big advantage” for McCain, and McCain’s flip flop on off-shore oil drilling.

So it’s all aboard the DoubleTalk Express, which don’t need no stinking $6.00 a gallon diesel gas to go where no man has gone before!