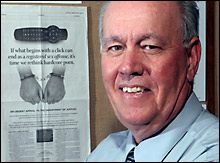 Phil Burress, head pin of the Ohio-based Citizens for Community Values, recently said of John McCain: “We don’t like him, and he doesn’t like us.” But Burress has even more recently found his nostrils wedged into McCain’s right armpit, following a little Come-to-Jebus moment with the aged Maverick. With the powerful scent of POW euphoria still fresh in his aural passageways, he lurched back to the keyboard of his personal Googelator and sent out an “interweb” note to some still-not-on-board allies, saying:

“I was once one of those people who said ‘no way’ to Senator John McCain as President. No longer. My ability to ignore my own opinions has risen to the top. The steaks are too high. Why does a good piece of cow cost $14.95 a pound?? For the love of Christ, this is America, a Christian Cow Nation, is it not?? But if Obama wins, I need to able to get up on November 5th, look at myself approvingly in the mirror for several minutes, and pray, ‘Lord, I did all that I could to implement my own will, and the will of my Party. But you thwarted us. I was sure your Will was my will. How could I have been so completely wrong about yours?’ “

Phil, Phil, Phil. How long must the Lord (and everyone else) bear with you? When will you understand the tyrannical and dictatorial political state John McCain is supposed to inherit, the one you are now kowtowing to, is the direct offspring of scientific materialism and philosophic secularism? Do you really think Johnnie started liking you for any other reason than he wants you and your freakin’ religious allies back in line?

You see, secularism no sooner freed us from the domination of the institutionalized church than it sold us into slavish bondage to the totalitarian state. Secularism freed us from ecclesiastical slavery only to betray us into the tyranny of political and economic slavery.

So the good Lord will be doing you and your allies a huge favor by giving us eight years of Barack, a president who actually knows the constitution well enough to teach it, even to a nation of politically ignorant polyps, and a man with a genuine spiritual relationship with Jesus which informs his moral and ethical compass in a way that is respectful of the line between church and state.

So. Phil. A bit of unsolicited advice: Recognize that you are an unwitting secularist. Stop thwarting the Lord you claim to serve, by trying to put the will of the Republican Party and it’s new marionette in training, John McCain, over His will. You’ll someday be glad you did.