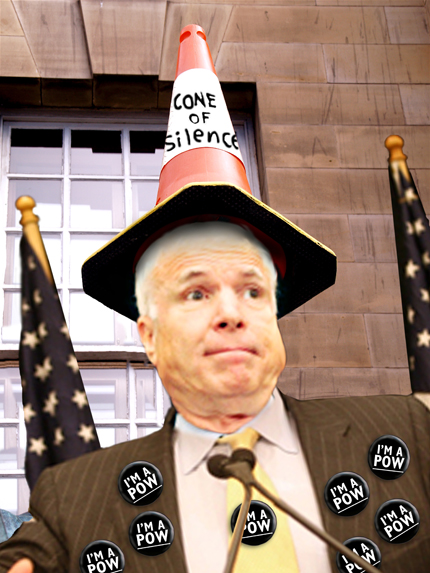 Senator John McConehead, Prisoner of War, demonstrates how he wore the “Cone of Silence” during Pastor Rick’s dog ‘n pony party for Evangelical seekers during the Saddleback soirée Saturday night.

ORLANDO, Fla. — Little Johnnie was not wearing his “cone of silence” Saturday night when Barack Obama was answering questions for Pastor Rick. Johnnie was actually in his limo on the way to the Saddleback Church of Fiery Peril, and McCain said there “. . .just wasn’t enough headroom in the limo to wear the (expletive deleted) thing.”

Pastor Rick started by asking Little Johnnie, “Now, my first question: Was the cone of silence comfortable that you were in just now?”

Little Johnnie blurted out, “I was trying to hear through the wall!” The audience laughed.

Even though Little Johnnie was supposed to be wearing the cone in the greenroom, Nicolle Wallace, McCain Campaign spokeswoman, said that Little Johnnie could not have heard the broadcast of the event, ’cause he was in his motorcade thingy, and was too far away to hear any of the questions.

“The insinuation from the Obama campaign that John McCain, a former prisoner of war, cheated, is outrageous,” Ms. Wallace said.

Yes, of course. A “former prisoner of war” would never be deceptive; even though ninety percent of a POW’s actions are, by design, an effort to deceive their captors of their true intentions.

But what about Little Johnnie‘s pernicious aides? Not having the unquestionable integrity of a prisoner of war, they might be tempted to tune into the broadcast, and say, in prepping Little Johnnie, tell him to pay particular attention to the issues of. . .

The fact that Little Johnnie asked when they could “get back to the question of judges,” when no such question had been asked him yet, might make it seem like a person of normal integrity (read: will cheat at the drop of a cone) had been briefed about a question on Supreme Court judges. Golly. Would Little Johnnie lie in church??

Is the Pope a Catholic? Has a cat got an ass?