. . . A very special world where hecklers are hustled off in a heartbeat, so the duffer doesn’t have to put up with their opinions long enough that he forgets what he was talking about; a world where the “third estate” is a fun-to-be-with bunch of sycophantic barbecue junkies; a world where a man with a kazillion munnies and a dozen houses he calls home can ridicule a political opponent as “elitist”; a world where “Victory with Honor” can become a reality by simply saying that it’s our goal. 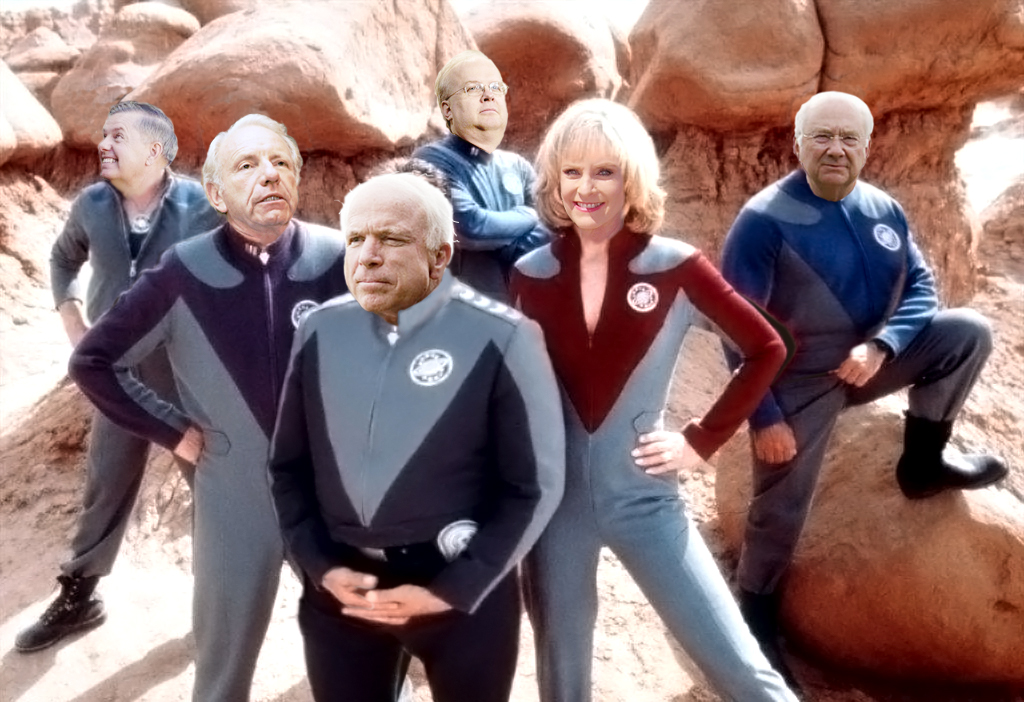 “Our American troops will come home with victory and with honor;  and that’s my message, my friends.”  Yeah.  Except those that continue to come home with missing limbs, with devastating life-changing brain injuries, or come home in flag-draped containers.  McWar’s “victory with honor” fantasy is a vestigial figment of the last century’s misunderstanding of the value of war, a discredited and backward-looking philosophy that believes minds can be changed— by blowing them apart.

Our next Commander-in-Chief will have to be a forward-looking man of peace.  That can never be John McCain, who’s “vision” of global politics is based on taking on smaller nations and beating them into submission;  sort of like Vladimir Putin is attempting to do in Georgia.

Since Chimpy is busy flag-waving pool-side in Beijing, it will be instructive to see how Mr. Never Surrender frames the conflagration burning out of control in Georgia. Will it be another affront to his teevee show bravura? or simply another opportunity to crank up the factual gaffe-after-gaffe machine as he wrestles Karl Rove‘s talking points to the ground in front of hand-picked MSM drones.

Meanwhile, Senator Obama has said there “is no possible justification for these attacks,” and called for a high-level international mediator, and an international peace-keeping force, adding the United States, Europe, and all other concerned countries must stand united in condemning this aggression while seeking a peaceful resolution to this crisis.