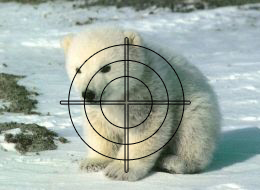 In an op-ed to the NY Times earlier this year, she wrote:

This month, the secretary of the interior is expected to rule on whether polar bears should be listed under the Endangered Species Act. I strongly believe that adding them to the list is the wrong move at this time…

The Center for Biological Diversity, an environmental group, has argued that global warming and the reduction of polar ice severely threatens the bears’ habitat and their existence. In fact, there is insufficient evidence that polar bears are in danger of becoming extinct within the foreseeable future — the trigger for protection under the Endangered Species Act. And there is no evidence that polar bears are being mismanaged through existing international agreements and the federal Marine Mammal Protection Act.

The state takes very seriously its job of protecting polar bears and their habitat and is well aware of the problems caused by climate change. But we know our efforts will take more than protecting what we have — we must also learn what we don’t know.

Sounds a lot like former SecDef Rumsfeld‘s famous dictum that there are “known unknowns” and such to justify the US invasion and occupation of Iraq.

Kinda like waiting to see if the snake venom is actually going to kill the victim before going to the expense of rushing him to the emergency room.