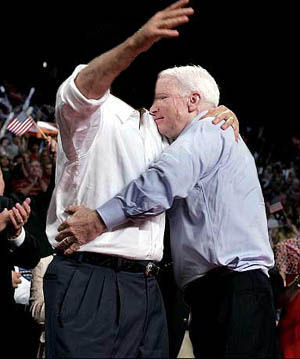 Bush: The Invisible Man at the Rethuglicans’ convention

For the first time in pundit memory, the president and vice-president of an incumbent party, in this case the Rethuglicans, failed to make a live appearance at their party’s nominating convention.

President George W. Bush phoned it in from the White House, while Vice President Darth Cheney reverted to form and was in hiding somewhere at an undisclosed location. There wasn’t even a customary tribute video of the Administration’s accomplishments (sic) over the last eight years.

Which explains why in his acceptance speech tonight, McCain mentioned Bush exactly ONCE.

And why a selection of other Rethuglicans convention speakers only mentioned Bush seven times, according to this index compiled by The NY Times.

The Grey Lady‘s front page analysis of McSame’s speech is titled: “The Party in Power, Running as if It Weren’t.”

John McSame– you can run but you can’t hide.