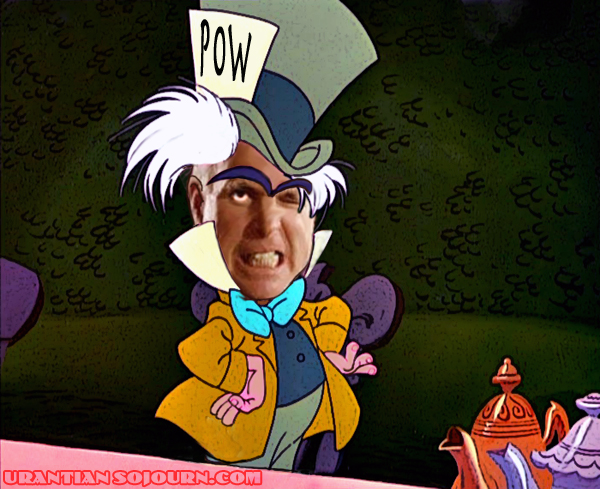 As the world turns stranger and stranger, we find ourselves quoting George Will:

In a letter to Treasury Secretary Henry Paulson and Fed Chairman Ben Bernanke, the RSC decried the improvised torrent of bailouts as a “dangerous and unmistakable precedent for the federal government both to be looked to and indeed relied upon to save private sector companies from the consequences of their poor economic decisions.” This letter, listing just $650 billion of the perhaps more than $1 trillion in new federal exposures to risk, was sent while McCain’s campaign, characteristically substituting vehemence for coherence, was airing an ad warning that Obama favors “massive government, billions in spending increases.”

Remember, McCain is the monkey who said he did not share his own economic adviser’s “views” when Gramm’s mouth brought attention to his flaming incompetence and responsibility for the current fiasco. Since McCain’s views can move from one side of his mouth to the other in a matter of minutes, who the fuck knows when a “qualm” will become a “quarrel”??

On “60 Minutes” Sunday evening, McCain, saying “this may sound a little unusual,” said that he would like to replace Cox with Andrew Cuomo, the Democratic attorney general of New York who is the son of former governor Mario Cuomo. McCain explained that Cuomo has “respect” and “prestige” and could “lend some bipartisanship.” Conservatives have been warned.

Conservatives “have been warned” that their entire philosophy of governance is a rotting maggot-infested corpse. The Republican Party has wrecked the nation.

Conservatives who insist that electing McCain is crucial usually start, and increasingly end, by saying he would make excellent judicial selections. But the more one sees of his impulsive, intensely personal reactions to people and events, the less confidence one has that he would select judges by calm reflection and clear principles, having neither patience nor aptitude for either.

Can you say, “Post Traumatic Stress Disorder”? What part of bat-shit crazy do you not understand??

Well George, ask yourself if your dismaying temperament as a fossilized conservative can be “fixed”;  can you just come out directly and say that McCain should be committed to hospital care and Obama should be elected president?

I didn’t think so.

The dominance of mediocrity spells the downfall of any nation.
—The URANTIA Book