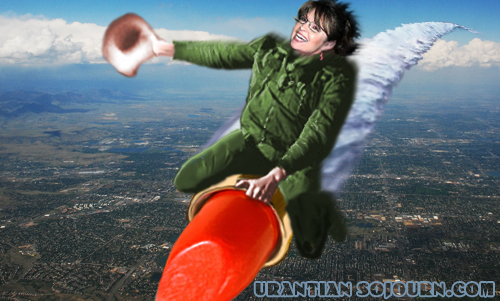 “To Russia with Love”

If we needed proof why the McSame campaign is desperately trying to keep Caribou Barbie from having to answer questions that would demonstrate her utter unfitness for the job of VP, last night’s interview with ABC’s former Good Morning America host Charles Gibson (whom she repeatedly referred to as “Churlie”) was at least a tentative beginning.

Asked about whether she would continue the Bush Doctrine, i.e. more of the same disastrous national security strategy that is bankrupting the USA vis a vis two failed occupations, the well-oiled Palin sound byte machine started sputtering. (An implanted earpiece malfunction, perhaps?)

GIBSON: Do you agree with the Bush doctrine?
PALIN: In what respect, Charlie?

Gibson was taken aback, apparently believing the question was self-explanatory. After an awkward attempt to define it in detail, he focused on it’s key strategic principle– “anticipatory self defense.” Palin said, in effect– ‘fine with me.’

The problem with anticipatory self defense, aka “preventive war,” is that it was deemed by the Neuremberg Tribunal to be the mother of all war crimes. Ignoring the difference between preemptive and preventive war is precisely how the neoconmen try to rationalize the invasion of Iraq, as well as a prospective attack against Iran. (Needless to say, their pals in the corporatist media continually aid and abet such obfuscation.)

Palin also tried to re-animate the canard that Saddam had something to do with Iraq [edit- in Fairbanks]. And multiple times said that she wouldn’t “second guess” Israel if it decided to attack Iran, which would drag the US into a larger regional war that could involve the Russians (who are building Iran’s nuclear industry) and send energy prices into the stratosphere.

And if Sailin’ Palin had her way and Georgia was already a member NATO, we’d likely be at war already with the Rooskies over South Ossetia.