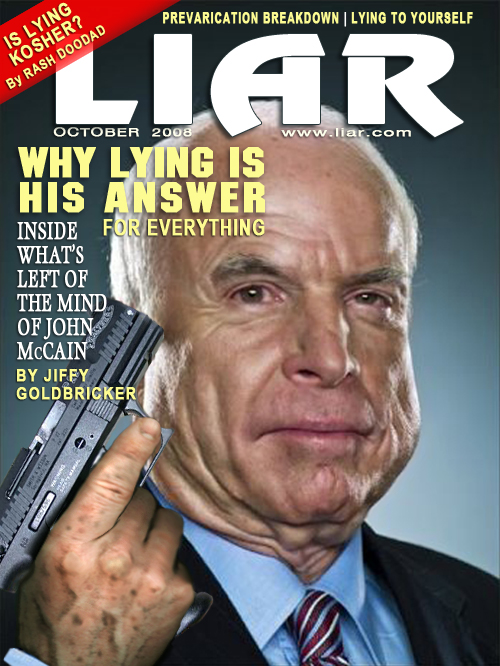 The McCain-Palin team of mavericks is on a lying jag this week. First out of the chute was Six-pack Sarah, paintin’ Barack Obama as pallin’ around with terrorists, like that William Ayers guy.  John Wilson was on it, though:

As part of a larger project where I’m compiling a long list of all the lies and smears spread about Obama, here are 30 lies about Ayers and Obama.

And here are just a few of those, to give you the flavor:

LIE: Obama and Ayers “appeared together at various public engagements…it would seem that they are more than just a little bit friendly.”(Sean Hannity, Hannity’s America, October 5, 2008, “Obama and His Friends: History of Radicalism”)
TRUTH: Appearing on a speaking panel is not a sign of friendship. There is no evidence that Obama had any role in ever inviting Ayers to speak.

LIE: Jerome Corsi claims about Obama: “either he did not know Ayers and Dohrn are still radical leftists–in which case he is implausibly naive–or Obama did know, which would confirm he joined with Ayers and Dohrn because Obama too continues to believe, albeit silently and secretly, in the Far Left’s radical agenda.”(p. 140)
TRUTH: Obama probably knew Ayers was a leftist, but he didn’t care. Obama believes in the notion of a free society, where you work with people you disagree with.

LIE: “Even today, Ayers appears to hold the same radical political beliefs he did in the Weather Underground, and Obama had to know that was also the case when he first met Ayers in 1995.”(Jerome Corsi, p. 147)
TRUTH: Corsi doesn’t explain how Obama “had to know” Ayers’ views on politics when he first met him. Telepathy? Mind-reading?

The rest of them are nearly equally repugnant, but if you can stand it I recommend you peruse them to get a real sense of the scope of the rapaciousness of the effort to paint Barack Obama as an evil man.  The in-your-face hypocrisy of those involved in this effort— including the supposedly wholesome hockey mom/pitbull from outback Alaska— is soul sickening.

But to all but the bottom feeders of the gene pool, to anyone with a sense of honor about their true perceptions of persons through the tee vee— Barack Obama does not present a picture of a dangerous terrorist;  rather does his calm demeanor and poised persona seem increasingly presidential, which cannot help but salve the growing fears over our progressing economic catastrophuque.

Meanwhile, the flailing of hockey mom mud will almost certainly stick on the ignorant, misinformed, and bigoted. But make no mistake: uncritically embracing such deception and viral hate invariably binds it to your own soul.  The increasingly ugly and desperate prevarications of John “straight talk” McCain reveal a soul already decaying and dying under the dual allegiance to self, and evil.

May he rest in peace.

“Happy are you when men shall revile you and persecute you
and shall say all manner of evil against you falsely. Rejoice and be
exceedingly glad, for great is your reward in heaven.”
—Jesus

•  •  •
Original McCain photo credit to Jill Greenberg, who shot this month’s cover of the Atlantic and has a buncha right-wing underoos all knotted up.