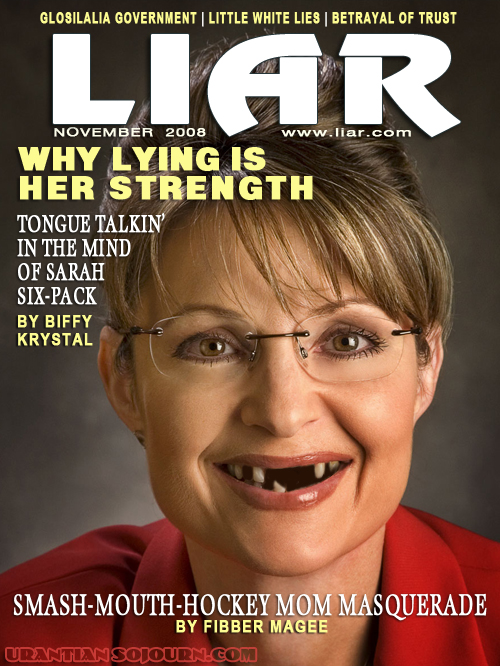 LIAR Magazine is working overtime.  But then, so is Sarah Six-Pack.

I like LIAR Magazine.  I subscribe.  It’s good to know who’s telling the biggest, most outrageous lies in a world beset by falsehood and deceit on every side. One specific thing I like about LIAR Mag: they think that someday, maybe not in our lifetimes, but someday when the electorate consists of unified and intelligent groups who elect only their best members to positions of governmental trust and responsibility, that crimes like the betrayal of governmental trust will carry the death penalty. Yeah. . .  Me too.

Sarah Palin announced on Saturday that— well, this:

That’s just not the case.

One can make the argument, as Palin and her allies have tried to do, that this investigation — launched by a bipartisan Republican-controlled legislative body — was somehow a partisan Democratic witch hunt, but one cannot honestly make the argument that the report concluded that Palin was “cleared of any legal wrongdoing” or “any hint of unethical activity.”

Hmmmmmmm. Shocked we are.

The report states: “I find that Governor Sarah Palin Abused [sic] her power by violating Alaska Statute 39.52.110(a) of the Alaska Executive Branch Ethics Act … Compliance with the code of ethics is not optional…

Tapper’s headline for this article is: “Palin Makes Troopergate Assertions that Are Flatly False”

No, it doesn’t depend on what she thinks the word “flatly” means;  it still means “absolutely.”

“Governor,” asked a reporter with the Anchorage Daily News, “finding Number One on the report was that you abused your power by violating state law. Do you think you did annnnnything wrong at all in this Troopergate case?”

“Not at all and I’ll tell ya, it, I think that you’re always going to ruffle feathers as you do what you believe is in the best interest of the people whom you are servin’,” Palin said. “In this case I knew that I had ta have the right people in the right position at the right time in this cabinet to best serve Alaskans, and Walt Monegan was not the right person at the right time to meet the goals that we had set out in our administration. So no, not having done anything wrong, and again very much appreciating being cleared of any legal wrongdoing or unethical activity at all.”

She was NOT cleared, certainly not of “unethical activity.”

Um, thank you Jake. Any ideas on how many Alaskans even know what “ethics” are? 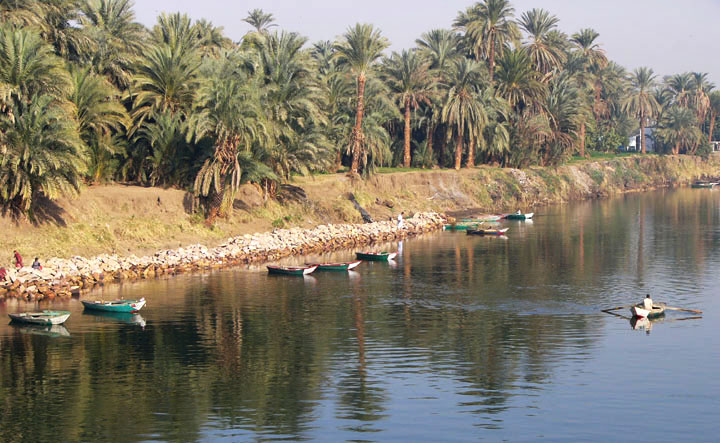 Like all downward spirals, whether being made by a broken Navy jet over Hanoi, or an inveterate liar in designer glasses,  this one, too, continued toward ground zero.

“Governor, if I can follow up,” a reporter said, “the report says that you did abuse your authority in trying to get Officer Wooten fired. How do you respond to that charge?”

“There was no abuse of authority at all in trying to get Officer Wooten fired,” Palin said.

“In fact, remember, Officer Wooten is still an Alaska state trooper, which is up to the commissioner, top brass in the department of public safety to decide who is worthy of wearing a badge and carrying a gun in the state of Alaska,” Palin said. “And if they think that Trooper Wooten is worthy of that, that’s their decision. I don’t micromanage my commissioners and ask them to hire or fire anyone, and thankfully the truth was revealed there in that report, that showed that there was no unlawful nor unethical activity on my part.”

I know, I know.  I wonder too if anybody had the courtesy to mention that her Republican issued License To Deny Reality has been expired since McCain received the nomination.  Huh.