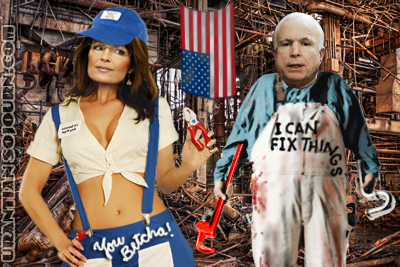 The Republican plumbers are ready to work on our very strong planks.

Sarah did a sitdown phone interview with James Dobson.

(H/T to Chris Kelly) She may have even had some notes, but they didn’t have anything in them about the very very strong planks that form the floor foundation of the Republikin party. I can’t be sure if these are direct quotes, but ya know, I think they’re viry viry close.

I think this greet country of ours also is a strong platform around the planks in this platform that respects the life and respects the entrepreneurial spirit of this great pro-Amerrikin country and those things, also back to the social issues that are what Republicans, at least in hour viry greet past had articulated and tried also to stand on.

Are they reaching you yet?

Now, finally, we have viry solid planks in the platform that will allow us to build an even stronger foundation for our greet country. It’s all good and it’s encouraging. You would maybe have assumed that we would have gotten further away from those viry viry strong planks. But no, they’re there, they’re solid, we stand on them, we can jump up and down on’em, and they support us in return,  and also again I believe that it is the right agenda for the country at this time. Viry, viry clear and contrasted tickets in this election November 4th. People are going to see the clear contrasts, you just go to the planks in our platforms and that’s where you see them.

I am such a very strong believer that McCain believes in those viry viry strong planks and we do have good conversations about some of the detells of the diffrint strong planks and also what they represent. I’m viry heartened that John McCain . . . he doesn’t want a Vice President who will check the opinions . . . of me at the door and also we talk about some of these and they’re viry important.  It’s most important though, also as you’re suggesting, that our viry greet Amerrikins also know that John McCain is solidly there on those solid planks in our platform that build the right agenda for Amerrica.

Now??
It won’t get any better.