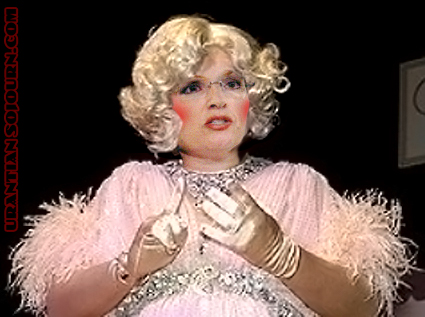 Palin as Giuliani-in-drag-on-the-ticket, pontificates on Pro-Americans at a Halloween fundraiser gala.

“We believe that the best of America is in these small towns that we get ta visit, and in these wonderful little pockets of what I call the rill America, bein’ here with all of you hard-workin’, veiry patriotic, veiry pro-America areas of this greyt nation.”
—Sarah Palin

Lemme tell you about “REAL” Americans.

Real Americans, and their real American values, are always harmonious and synonymous with the highest reality— the universally acclaimed public good— as it is best understood by any of us;  anything less would be, hhyeah, un-American.

Real Americans almost always try to embrace this qualitative high bar of reality, and through morals, and ethics, derived from, as John McCain says, our Judeo-Christian principles, real Americans pursue our collective-good destiny before, and in the name of, a Divine Creator.

But what has become the traditional Rovian/Atwater/Buchanan way of winning elections— divide and conquer— is a highly corrosive toxin to the unity of All Americans.  The monstrously fearful, hateful invective, sophistry, and falsehood which have continually marred McCain’s campaign should have immediately disqualified him as a candidate for our highest office — were this a more enlightened and truly religious society.  But the fact that even now the presidential contest is still a contest— indicates how permanent the damage is to the fabric of our democracy.

None of this is news to anyone, save the slowly awakening “Republican” Americans who still have a semblance of a moral compass left after the devastation of the amoral DickBush descent into the secular hell of total hypocrisy.  But Metaphorical Rats leaving a sinking ship are still rats.  The clear moral thinking with the power to shake off the spell of hate and fear that kept them on that ship of fools, even when the stench of the death of everything decent in humanity filled their nostrils, will still take time to regain its equilibrium.

It takes a great and noble character, having started out wrong, to turn around and go right.  Although Palin later “apologized” for any “misunderstanding” about her comments implying some parts of the country are less patriotic than others, and are obviously populated with liberal anti-Amerikans who are voting for a man with less executive experience than her, a man who pals around with domestic terrorists, yada, yada, yada— five will get you ten she continues to spout the same crap ’til election day.  Maybe then she’ll shut the fuck up.

Just don’t expect her— or McCain— to ever turn around and go right.