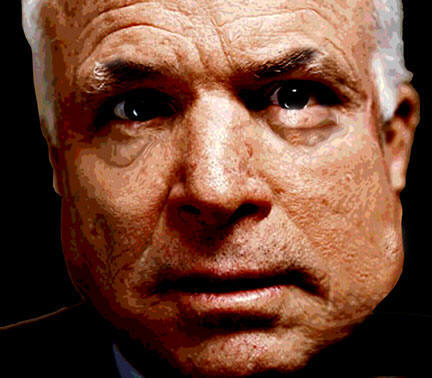 “Hate is the shadow of fear; revenge the mask of cowardice.”
—Jesus

“Barack Obama’s attacks on Americans who support John McCain reveal far more about him than they do about John McCain. It is clear that Barack Obama just doesn’t understand regular people and the issues they care about. He dismisses hardworking middle class Americans as clinging to guns and religion, while at the same time attacking average Americans at McCain rallies who are angry at Washington, Wall Street and the status quo,” reads a statement from spokesman Brian Rogers. “Even worse, he attacks anyone who dares to question his readiness to serve as their commander in chief. Raising legitimate questions about record, character and judgment are a vital part of the Democratic process, and Barack Obama’s effort to silence and shame those who seek answers should make everyone wonder exactly what he is hiding.”

Rogers‘ remarks are a deliberate attempt to simplify and obscure some of the rhetoric that has recently come from McCain supporters. Videos taken of people heading into McCain-Palin rallies have shown individuals who label Barack Obama as a terrorist, a communist and a threat to the well-being of the country.
At a town hall meeting in Wisconsin on Thursday, several attendees urged the Republican nominee to attack his opponent on the Ayers issue and Reverend Jeremiah Wright, who McCain himself has said should be off limits.

The rabid nature of the scene has startled longtime political observers and even former associates of McCain himself.

John Weaver, the Senator’s former top strategist, has said McCain is making a tactical mistake by letting abusive hecklers have their voices heard during his forums. David Gergen, a longtime Washington strategist, has warned that the rhetoric from these attendees could “lead to some violence.”

“Sen. John McCain, Gov. Sarah Palin and the leadership of the Republican party have a fundamental moral responsibility to denounce the violent rhetoric that has pervaded recent McCain and Palin political rallies. When rally attendees shout out such attacks as “terrorist” or “kill him” about Sen. Barack Obama, when they are cheered on by crowds incited by McCain-Palin rhetoric — it is chilling that McCain and Palin do nothing to object.”

And Frank Schaeffer penned a solemn and critical column (first published in the Baltimore Sun) personally addressed to McCain himself: “If your campaign does not stop equating Sen. Barack Obama with terrorism, questioning his patriotism and portraying Mr. Obama as “not one of us,” I accuse you of deliberately feeding the most unhinged elements of our society the red meat of hate, and therefore of potentially instigating violence.”

Hatred and fear are among the most primitive of our animal emotions. That makes them the least intelligent motivators of our “better angels” as Obama calls them— the spiritual urges to love and live all truth, admire beauty, and be goodness as human beings;  as children of a Divine Creator Father.  Hate and fear destroy appreciation of these values, and can only lead us away from them, and a greater appreciation of them as avenues to the solutions of our many problems, both socially and culturally, as well as spiritually.

Hatred is a spirit poison, that binds itself to soul;  that feeds upon itself.  Hate Speech— that is, language that is meant to inflame and incite hate in others— is ultimately destructive of personality. The survival character of a soul is never fostered by the compromise of our spiritual ideals.

Whatever Barack Obama‘s true shortcomings as a candidate may be, his statesmanship, poise, and demeanor, intelligence, and leadership ability are qualities of character that John McCain clearly lacks.  How can McCain explain the disconnect between what he calls his Judeo-Christian values and the way he conducts himself and his campaign?  McCain, for all his spiritual advisers, has forgotten the golden rule;  “Do unto others as you would have them do unto you.”

How long must Americans endure the spectacle of an angry little man who has called his spouse a “cunt” and a “trollop” in front of reporters, and directly infers that Barack Obama is a terrorist for merely being in the presence of a supposed “unrepentant terrorist,” even though William Ayers’ “record” indicates a fully rehabilitated citizen. McCain has seized on this grotesque self-serving distortion in judgment to incite hatred and fear in Americans.  And now that he’s got the truly base among his supporters aroused, he finds it politically necessary to back-pedal to some bare minimum semblance of moral behavior— and draws “boos” from the debased Americans that make up his crowds these days.

AFL-CIO President John Sweeney recently denounced these eruptions of incivility as dangerous, and expressed alarm that the top of the Republican ticket has done nothing to protest the crowd’s language.

Sen. John McCain, Gov. Sarah Palin and the leadership of the Republican party have a fundamental moral responsibility to denounce the violent rhetoric that has pervaded recent McCain and Palin political rallies. When rally attendees shout out such attacks as “terrorist” or “kill him” about Sen. Barack Obama, when they are cheered on by crowds incited by McCain-Palin rhetoric — it is chilling that McCain and Palin do nothing to object.

McCain now snarks that Senator Obama has written two memoirs, but his life is “not exactly an open book.”  But to be sure, McCain hasn’t read them, nor is it likely that he talks with anyone who has. Despite his recent hollow assertion that Obama is a “decent man” and no one to be “scared of,” it’s clear that his opinion of Obama is made up solely of his disgraceful talking points.  The ideas and motives of a lifetime are openly revealed in a crisis; and the growing specter of McCain‘s political life culminating in failure is bearing down on him more and more with each passing day.  In his own vernacular, the question is this: would he rather win an election than rehabilitate his reputation?

His ongoing display of cowardly disrespect of Barack Obama the person— at every opportunity— is his answer to that question, and belies the seeds of hatred and fear already sprouted and nurtured by both him and Governor Palin.  These weeds of hate will grow right along with the good until the harvest of votes.  And then, along with the rest of the chaf, they’ll be cast into a karmic fire of their own making.

Be not deceived; God is not mocked,
for whatsoever a man sows that shall he also reap.

Truth is coherent, beauty attractive, goodness stabilizing.
And when these values of that which is real are coordinated
in personality experience, the result is a high order of love
conditioned by wisdom and qualified by loyalty.
The real purpose of all universe education is to effect
the better coordination of the isolated child of the worlds
with the larger realities of his expanding experience.
Reality is finite on the human level, infinite and
eternal on the higher and divine levels.
—The URANTIA Book