Republicans whiners like David Frum are already complaining that Obama is “muscling his way into power.” If he had anything to do with the choice of the rug in the Oval Office seen in the picture below published by CNN , it’s definitely alright with us. 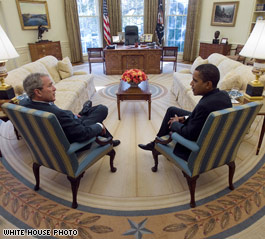 Obama and Bush confer over the Banner of Michael

*Compare to the Urantian Sojourn three concentric circles graphic on our “About” page.  This description is from The Urantia Book:

53:5.4 Since Michael elected to remain aloof from the actual warfare of the Lucifer rebellion, Gabriel called his personal staff together on Edentia and, in counsel with the Most Highs, elected to assume command of the loyal hosts of Satania. Michael remained on Salvington while Gabriel proceeded to Jerusem, and establishing himself on the sphere dedicated to the Father—the same Universal Father whose personality Lucifer and Satan had questioned—in the presence of the forgathered hosts of loyal personalities, he displayed the banner of Michael, the material emblem of the Trinity government of all creation, the three azure blue concentric circles on a white background. 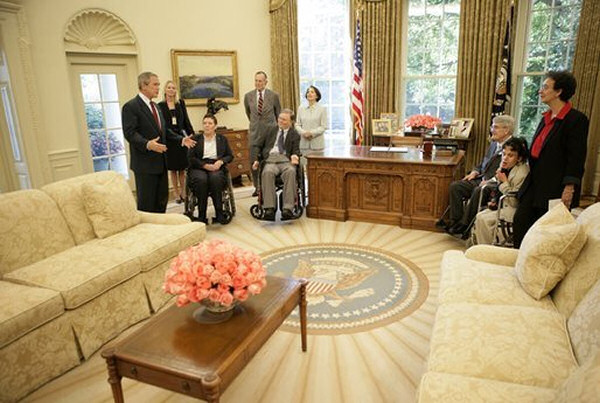 “This here is our Great Seal! You kin ride yur chairs right on it if ya want to;  it’s okay.”