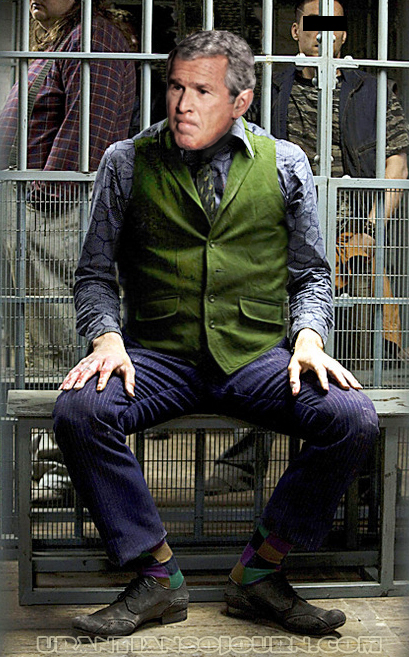 People, get ready.  Justice is coming.

You don’t believe it, do you.  Not in your wildest dreams do you think you’ll see Junior Dubya the killer joker sitting in  a holding tank, waiting for James Baker or some other Bush Family toad to come post his bail.

So what does that say about America.  That our president can use lies and falsehoods to order our young military men and women to kill hundreds upon thousands of men, women, and children— to kill them without question—  to kill them for oil.  It stretches our morals to the breaking point and beyond to let these murderers go unpunished.

Will there be a reckoning for these crimes at the insistence of the Obama administration?  If we can’t expect official inquiries by our Department of Justice into the Iraq War, then we are no longer a “great nation.”  We are a nation of moral weaklings that tolerated a government of criminals, by criminals, and for criminals. And the world— and its Creator— knows it.

“Justice makes a nation great, and the greater a nation the more solicitous will it be to see that injustice shall not befall even its most humble citizen. Woe upon any nation when only those who possess money and influence can secure ready justice before its courts!  It is the sacred duty of a magistrate to acquit the innocent as well as to punish the guilty. Upon the impartiality, fairness, and integrity of its courts the endurance of a nation depends. Civil government is founded on justice, even as true religion is founded on mercy.”

—Jesus speaking in The URANTIA Book