“You don’t really think I’m gonna take that off your hands, do you?” said President-elect Barack Obama, when George Bush hoisted the seventeen pounds worth of GOP fecal chunkatude representing a small portion of his shit-fest as president.

WASHINGTON — Monarchs, presidents, and athletes are among the recipients of a symbolic key to a city on special visits.  But the First Annual Ceremony of Change, held today in the Rose Garden, bestows to the president-elect— not a key to Washington D.C. and the White House— but a huge steaming heap of political poop— in this case, pachyderm poop— symbolic of the shitty mess outgoing President George W. Bush has left the country to clean up, after eight years of arguably the crappiest administration in the nation’s history.

Symbolizing such a catastrophe with an enormous chunk of fresh elephant dung set the stage for the first official “passing of the turd” before an invitation only crowd of official Washington.  The steaming symbol of GOP waste and ineptitude was the gift of sixty-year old Asian elephant, Ambika, the National Zoo‘s oldest resident elephant.

The festivities began with the hand-carted arrival of the specimen, produced during Ambika‘s morning constitutional. The selected portion weighed in at just over seventeen pounds. After some awkward practice attempts, Bush gingerly scooped up the watermelon-sized chunk of poo, and extended the dripping monster to Obama, who joked, “You don’t really think I’m gonna take that off your hands, do you?”  Bush, ever the glib-tongued orator, said  “Well I ain’t takin’ it with me!” oblivious to his situation, as usual. His second effort to pass the turd was graciously but firmly refused by President-elect Obama, who then turned to address the crowd, leaving Bush standing there, literally holding the shit.

As Obama looked out, hundreds of images of South Park‘s Mr Hankey on a stick waved slowly back and forth in the late morning sunlight, he mimicked the wave back, and said, “I think you all know that we have got to begin with a fresh— um— start on our problems, and frankly, we just don’t need any more. . . (the word “shit” reflexively echoed through the mind of everyone present during the intentional pause) . . .anymore “product” from you, George.”  A split second of silence was followed by a wild sustained roar of  cheers and applause, as Bush unceremoniously plopped the molten poop back into the cart, splattering everyone nearby, but most of all, himself.

Obama assured the crowd that the last eight years would, in the months ahead, severely test our will as a people and as a nation, but that he was absolutely certain that— in the end— we would produce the magnitude of change we need to clean up America and to change the world for the better.

A spontaneous chant of “Howdy-Ho! Howdy-Ho! broke out, and Scatology Week‘s first symbolic passing of the turd ceremony ended as it had began; with a whole lot of shit, still left to shovel. 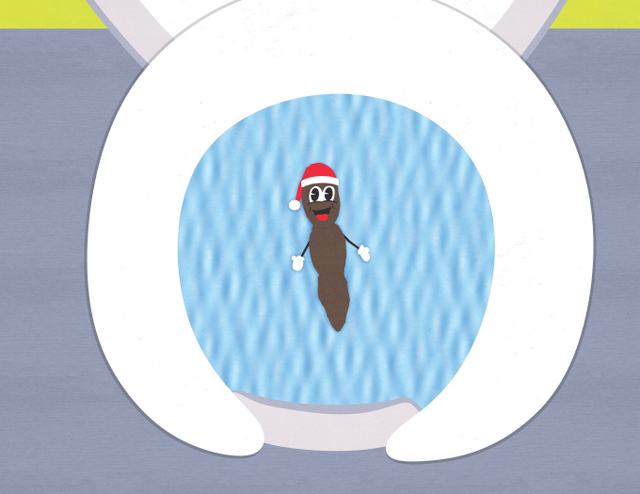