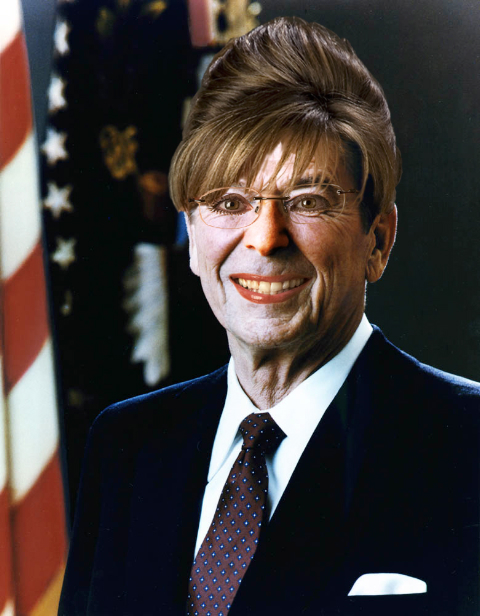 Sarah Reagan vies for control of the Republican Party

Thanks to the legacy of the failed Bush presidency and the electoral landslide it produced for the Democrats, the Republicans are convening in Miami today to figure out wtf to do next.

No doubt returning to the glory days of the Reagan Administration will be a major theme. But not even Dr. Frankenstein could reanimate that rotting corpse. It’s shining city on a hill has become a whited sepulcher filled with dead men’s bones, a monument to the failure of trickle down economics.

In an interview with Greta van Susteren Monday, Sarah reveals that:

Faith is a very big part of my life. And putting my life in my creator’s hands – this is what I always do. I’m like, OK, God, if there is an open door for me somewhere, this is what I always pray, I’m like, don’t let me miss the open door. Show me where the open door is. Even if it’s cracked up a little bit, maybe I’ll plow right on through that and maybe prematurely plow through it, but don’t let me miss an open door. And if there is an open door in (20)12 or four years later, and if it is something that is going to be good for my family, for my state, for my nation, an opportunity for me, then I’ll plow through that door*.

I’m like, so excited that there’s a door for Sarah to plow through should God crack it open a bit. (An improvement over George W. Bush who dispensed with the word “if” when announcing he had received God’s own Good Housekeeping Seal of Approval.) Though, I have to wonder why she didn’t consult the Big Guy before accepting a VP bid that would have placed her a fragile 72 year old heartbeat away from the nuclear football; or if she did, what went wrong.

No matter– I’m like, so thrilled at the prospect of Sarah debating a snobby elitist like Barack Obama who right wing blogging denizen John Hinderaker says could learn a thing or two about public speaking from that master of political malapropisms eloquence, George W. Bush:

Obama thinks he is a good talker, but he is often undisciplined when he speaks. He needs to understand that as President, his words will be scrutinized and will have impact whether he intends it or not. In this regard, President Bush is an excellent model; Obama should take a lesson from his example. Bush never gets sloppy when he is speaking publicly. He chooses his words with care and precision, which is why his style sometimes seems halting. In the eight years he has been President, it is remarkable how few gaffes or verbal blunders he has committed. If Obama doesn’t raise his standards, he will exceed Bush’s total before he is inaugurated.

I want what this guy is smoking.

It must take a tremendous amount of psychological effort to sustain the kind of delusion that dominates Republican thinking. To this I say–

* Compare:  “[T]he ‘wise man, when seeking entrance through the locked door, would not destroy the door but rather would seek for the key wherewith to unlock it.’ -The Urantia Book, quoting Jesus of Nazareth