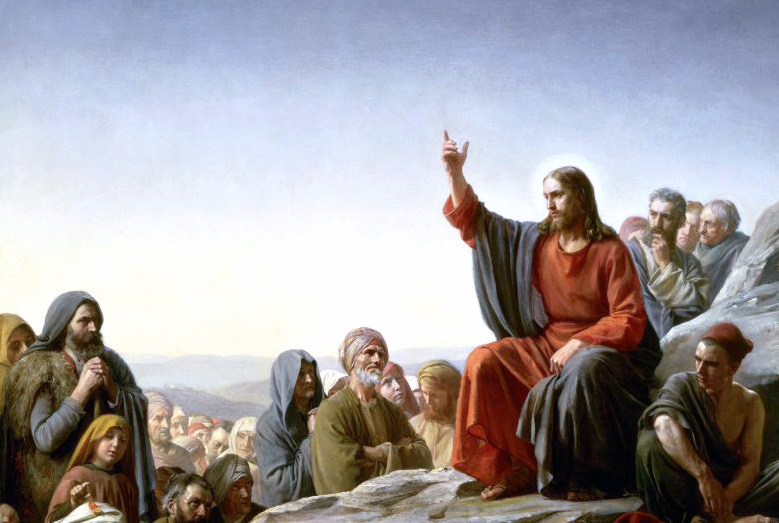 The Sermon On The Mount (section) •• Carl Boch

When the crowds who came to hear Jesus teach began to include many of his bitter enemies, he explained his decision to teach in parables this way:  “I will present my teaching in a parable, so that you may each take for yourself that which finds a reception in your heart.” And the following excerpt from the UB explains in greater detail his attitude towards wealth:

Jesus worked, lived, and traded in the world as he found it. He was not an economic reformer, although he did frequently call attention  to the injustice of the unequal distribution of wealth. But he did not offer any suggestions by way of remedy. He made it plain to the three [apostles] that, while his apostles were not to hold property, he was not preaching against wealth and property,  merely its unequal and unfair distribution. He recognized the need for social justice and industrial fairness, but he offered no rules for their attainment.

He never taught his followers to avoid earthly possessions, only his twelve apostles. Luke, the physician, was a strong believer in social equality, and he did much to interpret Jesus’ sayings in harmony with his personal beliefs. Jesus never personally directed his followers to adopt a communal mode of life; he made no pronouncement of any sort regarding such matters.

Jesus frequently warned his listeners against covetousness, declaring that “a man’s happiness consists not in the abundance of his material possessions.” He reiterated, “What shall it profit a man if he gain the whole world and lose his own soul?” He made no direct attack on the possession of property, but he did insist that it is eternally essential that spiritual values come first. In his later teachings he sought to correct many erroneous Urantia views of life by narrating numerous parables which he presented in the course of his public ministry.  Jesus never intended to formulate economic theories; he well knew that each age must evolve its own remedies for existing troubles. And if Jesus were on earth today, living his life in the flesh, he would be a great disappointment to the majority of good men and women for the simple reason that he would not take sides in present-day political, social, or economic disputes. He would remain grandly aloof while teaching you how to perfect your inner spiritual life so as to render you many fold more competent to attack the solution of your purely human problems.

Jesus would make all men Godlike and then stand by sympathetically while these sons of God solve their own political, social, and economic problems. It was not wealth that he denounced, but what wealth does to the majority of its devotees.

This parable, Dividing the Inheritance, is also known as “the parable of the foolish rich man.”

Let me tell you a story of a certain rich man whose ground brought forth plentifully; and when he had become very rich, he began to reason with himself, “What shall I do with all my riches? I now have so much that I have no place to store my wealth.” And when he had meditated on his problem, he said: “This I will do; I will pull down my barns and build greater ones, and thus will I have abundant room in which to store my fruits and my goods. Then can I say to my soul, soul, you have much wealth laid up for many years; take now your ease; eat, drink, and be merry, for you are rich and increased in goods.”

But this rich man was also foolish. In providing for the material requirements of his mind and body, he had failed to lay up treasures in heaven for the satisfaction of the spirit and for the salvation of the soul. And even then he was not to enjoy the pleasure of consuming his hoarded wealth, for that very night was his soul required of him. That night there came the brigands who broke into his house to kill him, and after they had plundered his barns, they burned that which remained. And for the property which escaped the robbers his heirs fell to fighting among themselves. This man laid up treasures for himself on earth, but he was not rich toward God.

When Jesus had finished his story, another man rose up and asked him: “Master, I know that your apostles have sold all their earthly possessions to follow you, and that they have all things in common as do the Essenes, but would you have all of us who are your disciples do likewise? Is it a sin to possess honest wealth?” And Jesus replied to this question: “My friend, it is not a sin to have honorable wealth; but it is a sin if you convert the wealth of material possessions into treasures which may absorb your interests and divert your affections from devotion to the spiritual pursuits of the kingdom. There is no sin in having honest possessions on earth provided your treasure is in heaven, for where your treasure is there will your heart be also. There is a great difference between wealth which leads to covetousness and selfishness and that which is held and dispensed in the spirit of stewardship by those who have an abundance of this world’s goods, and who so bountifully contribute to the support of those who devote all their energies to the work of the kingdom. Many of you who are here and without money are fed and lodged in yonder tented city because liberal men and women of means have given funds to your host, David Zebedee, for such purposes.

But never forget that, after all, wealth is unenduring. The love of riches all too often obscures and even destroys the spiritual vision. Fail not to recognize the danger of wealth’s becoming, not your servant, but your master.”