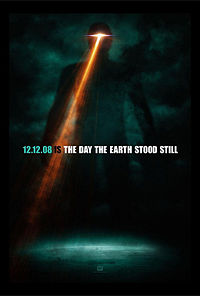 It’s not nice to fool with mother nature, especially when she comes armed with a bad-ass 28′ high robot named GORT.

Such is the lesson of the remake of the classic 1951 sci-fi film, The Day the Earth Stood Still. The original was set in the context of the Cold War between the US and the Soviet Union, when nuclear weapons and nascent space travel and humanity’s war-like nature posed a future threat to the rest of the civilized galaxy.

Here, the issue is one of planetary ecocide.

Seems that Earth is one of a very few planets whose complexity of life forms makes it a candidate for galactic intervention, even if it means annihilating its human inhabitants who seem hell bent on its destruction. This ownership/stewardship issue is dramatized in the confrontation between Klatu (Keanu Reeves), a special envoy sent by a federation of civilizations to render a final judgment on the situation; and the US Secretary of Defense, played by a Palin-esque bee-hive coiffed Kathy Bates, who demands to know what Klatu’s intentions are towards “our planet.”  To which Klatu responds: “YOUR planet?”

Unfortunately, the movie does little to dramatize its premise, the ongoing planetary ecological crisis. There’s plenty of stock film that could have been used to drive the point home. But never let something cheap and illustrative like that get in the way of expensive special effects…

In the original, Klatu is played by a stern but ultimately warm and charming Michael Rennie whose relationship with a single working mom, Helen Benson (Patricia Neil) and her curious and good natured son Bobby (Billy Gray) lead him to a favorable judgment of human character. Reeves‘ ever glowering and never charming Klatu comes to the same judgment vis a vis his interactions with Helen  (Jennifer Connely), updated and promoted from a mere secretary in the original to a high achieving government biologist; and her troubled step-son, renamed Jacob (Jaden Smith).

The climax of the original movie is a dramatic, though compassionate, demonstration of the federation’s power—  all the world’s electricity suddenly goes dead except for things like hospitals and planes in flight. Its resolution occurs when Klatu issues a final warning to a group of assembled scientists, after which he takes off in his space ship (to the accompaniment of Strauss‘ Thus Spake Zarathustra, also used as the main theme in Stanley Kubrick‘s 2001).

The remake pushes the clock forward by issuing judgment that earthlings are beyond redemption, and the destruct sequence is begun. Gort unleashes a plague of metal insects that begin to consume everything man-made in their path, growing larger as they do so. But before they reach critical mass, Klatu shuts them down, persuaded by his interactions with Helen and Jacob and from the argument from her mentor, Nobel laureate Professor Barnhardt (John Kleese reprising the Sam Jaffe role) that humans are worth saving, after all.

(Barnhardt politiely points out that by Klatu’s own admission, his own world had reached a similar “tipping point,” yet they were able to pull themselves back from the brink. Why Klatu needs Barnhart to remind us of this is the biggest weakness in the story line for me. Perhaps not coincidentally, the same “humans are at their best when things are at their worst” observation was made by the visiting alien (Jeff Bridges) in John Carpenter‘s movie Starman.)

There are no real surprises in the remake except for the number of Biblical allusions salted throughout.  (Attributable perhaps to Hollywood’s attempt to square the circle between maintaining its secular cool while simultaneously appealing to the large American religious market, evident in the huge commercial  success of Mel Gibson’s film The Passion of the Christ.)  Biblical analogues include the whole notion of an end times Judgment and apocalypse, highlighted by all-consuming hoards of metal locust-like insects;  the attempted murder of the messenger/prophet who warns that humans will be punished for their failed stewardship;  a Noah-esque removal of vital species via spaceships that the SecDef specifically identifies as “arks”;  changing Bobby’s name to a biblical one, Jacob, who like the Jacob of old, contends with a messenger/angel sent from a higher power; and of course, redemption.

Urantia Book readers will notice a number of parallels, both in the original story and the remake. The idea of a single emissary representing  a multitude of galactic civilizations, highlighted by the “YOUR planet” line that could have been delivered to the possessive Planetary Prince, Caligastia,  the self-proclaimed “God of Urantia”;  the executionary power of “the agents of the Uversa Ancients of Days” refelcted more in the original GORT;  the idea that the earth is unique for its complex life forms finds resonance in the book’s description of Urantia being designated  as a one-in-ten “life modification sphere, as is the idea that wholesale planetary evacuations can occur in times of crisis (but unlike the movie includes a “no human left behind” policy);  and for those of us still dealing with planetary abandonment issues, we can relate to Jacob’s struggle to forgive his dead father for leaving him to face a hostile world alone, notwithstanding the compensatory presence of his loving step-mom who puts her own life and career on the line in an apostolic-like attempt to save Klatu so that he can exploit the cosmic “time lag of justice” loophole, exercise a little mercy, and save the world.

Overall, I like the original movie more.  The black and white cinematography was superb;  the acting was better;  the special effects were state of the art but didn’t subsume the story line; and it ended on a note of ambiguity which left the question of human free will hanging in the balance.

To its credit, the remake does a good job of contemporizing the major plot points, and delivers at least one good line by Reeves’ Klatu, spoken to Jacob as the young boy struggled with what he perceived as the injustice of his father’s death, paraphrased as follows:

There is no such thing as death; all is transformed into a higher state of being.

In close, to any agents of the Uversa Ancients of Days that might be auditing this transmission, I have only this to say: