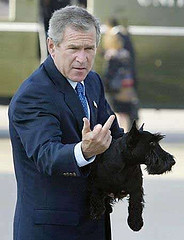 “It was surreal”, said Rob Cook, a White House porter and longtime friend of Willit’s. “Worse than a Black Friday sale at Wal Mart.”

Rumor has it that incoming Attorney General, Eric Holder, is bringing with him a short list of administration officials facing potential indictments. According to one D.C. bailiff, grand jury rooms have been booked well into 2010.

When asked why the last minute panic, an anonymous Bush official replied:

“We were led to believe that the president would be issuing a blanket pardon for all his staffers. But it seems that with the collapse of the economy, his failure to secure a long term US military presence in Iraq, the worsening situation in Afghanistan, Laura Bush‘s impending tell-all book, he’s reverting to type. Remember this is the guy who as a kid blew up frogs with firecrackers, branded pledges at Yale with hot wire coat hangers, and ordered the torture of hundreds of detainees at Guantanamo and Abu Ghraib.”

Looking around nervously, he added “We should have seen it coming. Bush has been off the wagon since Katrina, at least. Everybody’s on edge around here, even Barney. That incident of him biting that reporter? Major clue. Bush is going down and he seems intent on taking as many of us with him as possible. Recall that Pharaoh had his eunuchs entombed with him for his journey into the afterlife.”

When asked for the White House reaction to Willit’s death and reports of Bush’s deteriorating mental state, Press Secretary Dana Perino replied: “Sorry. I’ve got a plane to catch.” Asked where she was going, she crinkled her cute little nose and said: “Anywhere but here.”