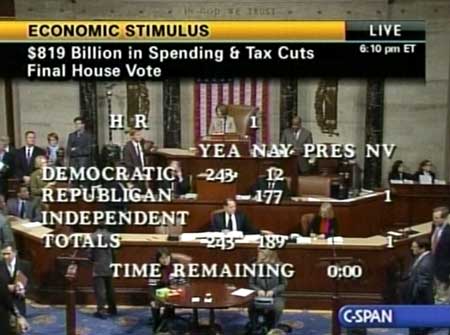 Despite the worst fiscal crisis since the Great Depression, House Rethuglicans voted unanimously late today against an Obama approved fiscal reconstruction plan. This despite O’s efforts to engage them directly, traveling to their turf to answer their questions and otherwise engage them (including inviting them to the White House for cocktails after the vote).

Obama’s open hand consisted of his agreement to remove 100s of millions of dollars for such radically socialist programs as family planning and the refurbishment of the Washington Mall, which the Bush Administration had allowed to be undermined by the relentless waters of the Potomac. O even agreed to increase the ratio of tax cuts to job creation programs, despite the fact that the former returns $1.03 cents to the dollar, while the later returns something like $1.56.

What did O get in return from the Grand Obstructionist Party? The proverbially closed fist. (He’ll likely get more cooperation from the Iranians.)

An obvious question presents itself: Why should the suggestions of the party that brought us to this mess be given any more consideration then they rightfully deserve?

Now, it’s hard not to conclude that O got punked here; that the criticism from the progressive blogosphere about the futility of trying to pursue bipartisanship with the Rethugs was right on the money.

But looking beyond the obvious, I wish to point out something else that hasn’t been factored much into O’s strategy, and which in the aftermath of the Rethugs’ negative vote, can be used against them. To wit: market psychology.

Whatever political considerations O had for trying to enlist Rethuglican support, what the markets need most now is confidence, which in this case is confidence in the Democratic plan for economic salvation. The Rethugs’ opposition to the recovery plan, whatever their economic rationale, is essentially political, and given the urgency of the moment, inimical to the kind of immediate action required to prevent further psychological, and thus actual damage.

Rush Limpbot, after proclaiming his fervent desire to see Obama (and thus America) fail, is likely hungover this AM after celebrating the Rethugs’ obeisance to his pudgy ass. (An example of which can be seen here.)

Sure, there are parts of the plan that can be improved— what legislation can’t? The Rethugs’ Senate colleagues can try to shape the bill to their liking, after which it is subject to further revisions by the joint House-Senate conference committee.

Then again, the Rehtugs have spent the last 30 years trying to promote the interests of the ruling class over the rest of the country. So with them, it’s as the Mafia says— just business.