Not possessing the steely intestinal constitution of the heroic Driftglass, I simply cannot breakfast on the barf of Sunday morning hurl coming outa the teevee talking head mouse circus, as only he can.  So I seldom miss reading what he draws from that frothy culture muck-pit.  It’s just one more great reason why he’s in a class by himself, and for want of some finer, more worthy yardstick, that class would be “Best Individual Blogger.”  Do your due suffrage.  Go vote.

But. I digress. My substitute Sunday morning vittles includes a steaming hot cuppa Huff Poop, a whirled dervish of headlines served up cafeteria style at Huffington Post.  And just so you know I have an opinion about every-fucking-thing under the sun Son, here’s a portion of poached-posts that promise a soothing colonic of today’s tastiest tidbits. 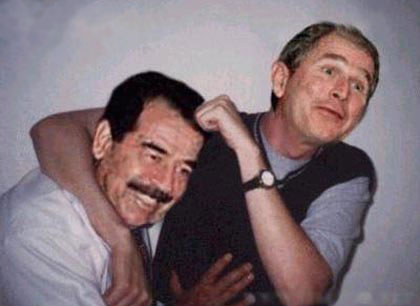 Serving up noogies world-wide for the past ate years. . .

Bush: I Refused To “Bail Out” GOP
Yeah; sure you did.  In a waning melange of Brit Hume wallowing in Bush‘s hubris, we must quaff the dregs of Republican noblesse oblige:  Bush spurning his own party’s Whiner’s For Self-preservation-wing for the principle of— yes, he said this: “freedom in people’s souls”—  to prosecute the Iraq war into the depths of depravity.

Obama: Gitmo Not Likely To Close In My First 100 Days
Appearing on “This Week” with pamper-sniffer George Sniffalottapus, president-elect Barack Obama continued to adhere to real values and the rule of law, to the continued amazement of practically everyone with a journalism degree by reiterating his commitment to close Gitmo.  WTF;  there’s nothing new here except our nation’s valiant return to it’s values and the rule of law;  next.

Cheney On Not Catching Bin-Laden: “We’ve Got A Few Days Left”
I suppose I shouldn’t be all that surprised to run across the word “scabrous” in an article on the antics of Dick the Cheney. An yet, every time I brush against the grating armature of DtC‘s alternate universe, the thought of a souped-up cattle prod sautéing the truth outa his pacemaker haunts me. . . Yeah, Dick;  You gotta few days left.

Bush’s Most “Anxious” Moment
When asked by that bastion of cultural flotsam People Magazine, what moments from the last eight years he revisited most often, George the Bush coughed up— God’s truth— the miserable excuse for a pitch he threw at the start of the 2001 World Series. “I never felt that anxious any other time during my presidency, curiously enough.”

Ask yourself.  Why would incurious George find that ceremonial twaddle so anxiety-laden— as apposed to say, torturing human beings in the name of the freedom to do so;  or ordering up the fricasseeing of thousands of innocent Iraqi civilian Urantians in his elective war fur awl.

Also of note.  The Dowd says she was twice close enough this past week to kick Dick Cheney— um— “in the shins.”  And this confession of the lack of testicular fortitude comes via the same NYT op-ed limp noodle salad that includes the revelation that “Cheney’s theory of executive ‘unitary’ power and pre-emptive (sic) war was a theory of Constitutional thuggishness.” Gosh. Feh. Darn. Ya think? 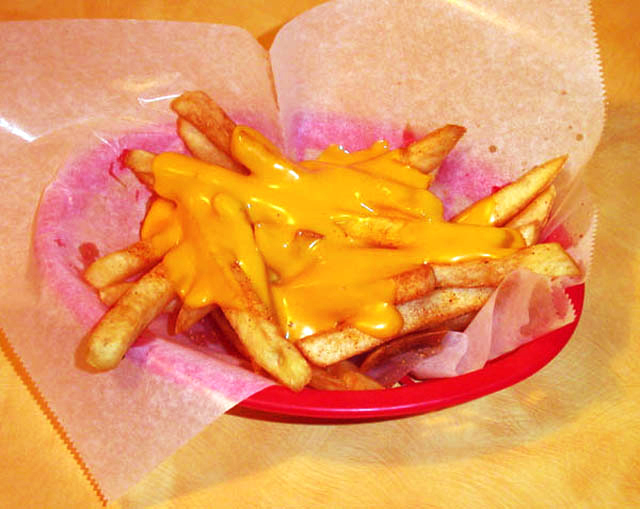 Obama Drops By Famous D.C. Diner For Lunch
Barack and Washington Mayor Adrian Fenty got down on some smoked pork ‘n beef sausage to the delight of unscreened, actual patrons of Ben’s Chilli Bowl, Saturday.

Can you say: “Man of the People‘s Grub”?
I knew that chew cud.

Obama On Critics: If Krugman Has A Good Idea, I’ll Listen
“IF” he has a good idea??
Well I suppose there’s always a chance, huh.  Let’s put him on retainer.

Conservative Bloggers Apoplectic Over GOP Cooperation With Obama
So?

Well then.  Time for lunch.