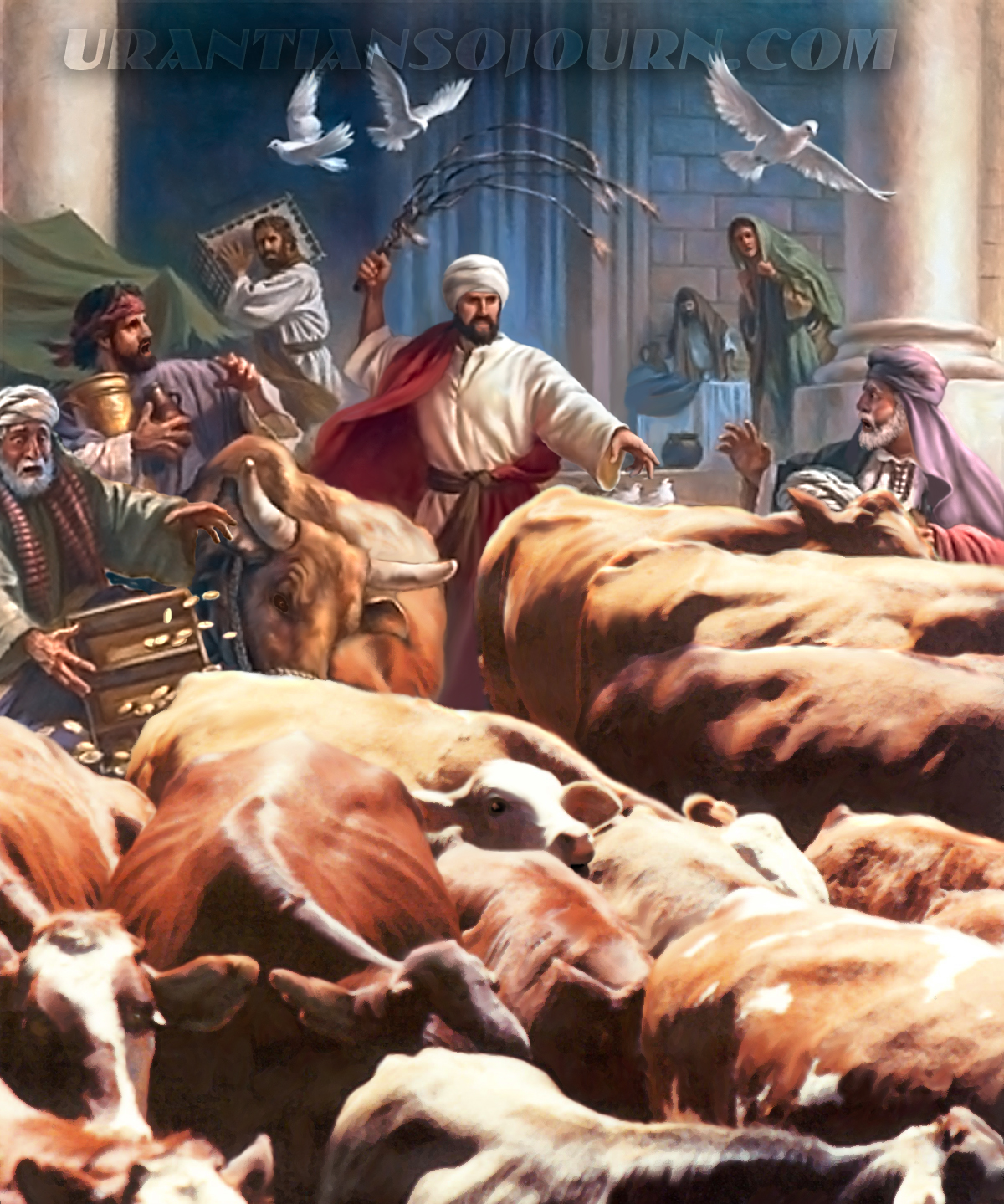 The temple cleansing really started when Jesus, taking a whip from a lad who was moving some one hundred bullocks from one temple holding pen to another, “swiftly” drove the animals out of the temple.  Seriously.
(Original image)

NOTE. This is Easter week, and in addition to our usual load of jetsam we’ll be posting accounts from The Urantia Book of certain events of the last few days in the life of Jesus, and since we read them so you don’t have to, we’ll be taking the liberty of editing and paraphrasing parts of them in the vernacular of our choice.  So sit back, up, or down, and enjoy.

JERUSALEM— Monday, April 3rd, 30 A.D.  It was about nine o’clock on this beautiful morning when Jesus and the apostles arrived at the temple in Jerusalem.   They went directly to the large court where Jesus often taught, and after greeting the believers who were awaiting him, Jesus mounted one of the teaching platforms and began to address the gathering crowd.  The apostles, not having recovered from the experience of the preceding day, were expectant, fearful, and profoundly affected by a certain feeling of detachment growing out of the Master’s sudden change of tactics;  they withdrew a short distance and awaited developments.

During the Asmonean dynasty, the Jews coined their own silver money.  Temple dues of one-half  shekel (and all other temple fees) had to be paid with this coin, and this coin only.  This regulation required that money-changers be licensed to exchange the many sorts of currency in circulation throughout Palestine and other provinces of the Roman Empire, for this orthodox Jewish shekel.  In the times of Jesus the temple head tax was was one-half shekel (a coin about the size of the American dime, but twice as thick) and payable by everyone— except women, slaves, and minors.  Oh, and the priests had managed to get themselves exempted from the payment of temple dues as well.

From the 15th to the 25th of the month preceding Passover, “accredited” money-changers set up booths in the principal cities of Palestine to provide the Jewish people with proper money to pay their temple dues in Jerusalem.  After this ten-day period, however, the money-changers moved their tables right smack into the temple courts at Jerusalem.  They were permitted to charge the equivalent of from three to four cents commission for the exchange of a coin valued at about ten cents, and if a coin of larger value was offered for exchange they could collect double.

So these “temple bankers” profited from the exchange of money intended for the purchase of sacrificial animals, and for the payment of vows and the making of offerings.  But these temple money-changers not only conducted a regular banking business for profit in the exchange of more than twenty different currencies which visitors would bring to Jerusalem, they also engaged in all other kinds of transactions pertaining to the banking business. They were bankers.

Both the temple treasury and the temple rulers profited tremendously from these commercial activities. Part of these gains was reserved for the temple treasury, but the larger part went indirectly into the hands of the ruling high-priestly families. How much are we talking?  It was not uncommon for the temple treasury to hold upwards of ten million dollars (in 20th century American dollars) while the common people languished in poverty and continued to pay these unjust levies.

Jesus was not alone in resenting this profanation of the temple; the common people, especially the Jewish visitors from foreign provinces, also heartily resented this profiteering desecration of their national house of worship.  The Sanhedrin itself held its regular meetings in a chamber surrounded by all this babble and confusion of trade and barter.  It was in the midst of this noisy gaggle of money-changers, merchandisers, and cattle sellers that Jesus attempted to teach the “gospel of the heavenly kingdom.”

As Jesus was about to begin his address, two things happened to arrest his attention. A violent and heated argument had arisen over the alleged overcharging of a Jew from Alexandria, while the air was rent by the bellowing of a drove of some one hundred bullocks which was being driven from one section of the animal pens to another.  As Jesus paused, silently but thoughtfully contemplating this scene of commerce and confusion, close by he beheld a simple-minded Galilean, a man he had once talked with in Iron, being ridiculed and jostled about by supercilious and would-be superior Judeans;  and all of this combined to produce one of those strange and periodic uprisings of indignant emotion in his soul.

To the amazement of his apostles standing near at hand, who refrained completely from participation in what so soon followed, Jesus stepped down from the teaching platform and, going over to the lad who was driving the cattle through the court, took from him his whip of cords and swiftly drove the animals from the temple. Oh snap.  Then,  he strode majestically before the wondering gaze of the thousands assembled in the temple court to the farthest cattle pen and proceeded to open the gates of every stall and to drive out the imprisoned animals. Shift happens.  By this time the assembled pilgrims were electrified, and with uproarious shouting they moved toward the bazaars and began to overturn the tables of the money-changers.  In less than five minutes all commerce had been swept from the temple.

By the time the near-by Roman guards showed up, all was quiet, and the crowds had become orderly;  Jesus, returning to the speaker’s stand, spoke to the multitude:

“You have this day witnessed that which is written in the Scriptures: ‘My house shall be called a house of prayer for all nations, but you have made it a den of robbers.”‘

But before he could say anything else, the great assembly broke out in hosannas of praise, and presently a throng of youths stepped out from the crowd to sing grateful hymns of appreciation that the profane and profiteering merchandisers had been ejected from the sacred temple. By this time certain of the priests had arrived on the scene, and one of them said to Jesus, “Do you not hear what the children of the Levites say?”  And the Master replied, “Have you never read, ‘Out of the mouths of babes and sucklings has praise been perfected’?”  And all the rest of that day while Jesus taught, guards set by the people stood watch at every archway, and they would not permit anyone to carry even an empty vessel across the temple courts.

When the chief priests and the scribes heard about all this, they were dumfounded.  And they feared the Master all the more, and all the more they determined to destroy him.  But they were nonplused. They did not know how to accomplish his death, for they greatly feared the multitudes, who were now so outspoken in their approval of his overthrow of the profane profiteers. And all this day, a day of quiet and peace in the temple courts, the people heard Jesus’ teaching and literally hung on his words.

This surprising act of Jesus was simply beyond the comprehension of his apostles. They were so taken aback by this sudden and unexpected move of their Master that throughout the whole episode they stood huddled together near the speaker’s stand;  they never lifted a finger to further this cleansing of the temple.  If this spectacular event had occurred the day before, at the time of Jesus’ triumphal arrival at the temple at the end of his tumultuous procession through the gates of the city,  while being loudly acclaimed by the multitude, they would have been ready for it;  but coming as it did, they were wholly unprepared to participate.

The cleansing of the temple discloses the Master’s attitude toward commercializing the practices of religion, as well as his detestation of all forms of unfairness and profiteering at the expense of the poor and the unlearned.  It also demonstrates that Jesus did not look with approval upon the refusal to employ force to protect the majority of any given human group against the unfair and enslaving practices of unjust minorities who may be able to entrench themselves  behind political, financial, or ecclesiastical power.  Shrewd, wicked, and designing men are not to be permitted to organize themselves for the exploitation and oppression of those who, because of their idealism, are not disposed to resort to force for self-protection or for the furtherance of their laudable life projects.