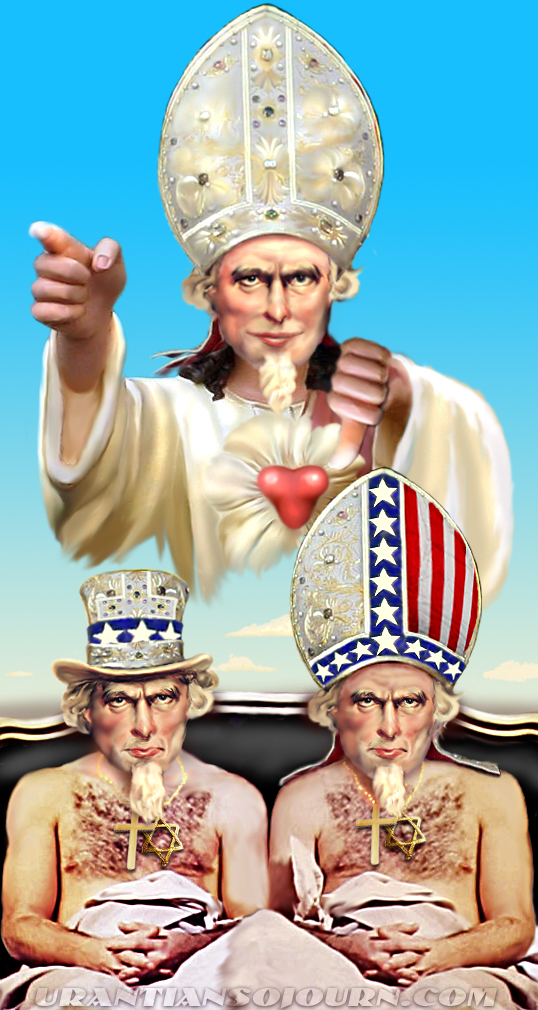 You can live with each other, you just can’t be married.

“And who knows which is which, and who is who”
—Pink Floyd

The long evolutionary heritage of religion has always been inextricably linked with the forms and functions of the evolution of government.  Long ago, the early tribal shamans were the go-to guys for all the practices of evolutionary religion, and in many groups they outranked the war chiefs;  and it was this dynamic that marked the beginning of the church domination of the state.

The early priesthoods were usually allied with the military power of the tribe, so no surprise that all primitive religions sanctioned war.  And the tribe made war at the bidding of their gods—  their chiefs or shamans.

We’re looking at the uniquely American roots of our “Judeo-Christian” heritage and how they’ve managed to grow into our government. A few people were writing stuff down way back when, and their scribbles can instruct us even today.  The early Hebrews of Palestine believed in a “God of battles.” The story of their raid on the Midianites (See Numbers 31 in your favorite interpretation of the scripture) is a typical example of the horrible cruelty of all ancient tribal wars, with the slaughter of all the males, male children, and all women who weren’t virgins;  all executed in the “name of the Lord God of Israel.”

Violence is the law of nature, and war is the natural heritage of evolving humanity.  Peace, then, should serve as the social yardstick measuring the advancement of civilization.  And one of the great peace moves of the ages has been the ongoing attempt to separate church and state.

The first strange wedding and bedding in our survey of church and state is that of the Hebrews under Roman suzerainty. For several generations, a small and decidedly unpowerful group of Jews was able maintain a considerable degree of self-government and relative independence from Syria to the north and Egypt to the south, all the while under Roman rule.

By the time Christ was born, (7 B.C.) the entire Mediterranean world was a unified empire.  For the first time in the world’s history, good roads interconnected many major centers, including the major route through Palestine, and a great era of trade and travel was spreading rapidly. European civilization was unified under three remarkable influences:  The Roman political and social systems, the Grecian language and culture, and to a certain extent, their philosophy, and the rapidly spreading influence of Jewish religious and moral teachings.

The Romans, to be sure, had little use for the religion of the Hebrews, yet Roman politics, as full of intrigue as they were, allowed for a vocal religious minority to force the ignoble death of one of their own— even the Son of God—at the hands of their overlords.  But why?

Flash Forward to 2000 A.D.
For the first time in the world’s history, poor roads, expanding oceans, global air travel, and the internets interconnect almost (pick a big number) percent of us, including the bleeding open wounds of Iraq, Afghanistan, and Palestine, and a great era of trade and travel has culminated in fierce global financial chaos interdependence of almost all nations on earth.

Earth civilization has yet to find unity under any worldwide political and social system, despite the steaming heap of problems both foreign and domestic left in the wake of an apocalyptic failure of American leadership on both those fronts.  The many languages of the world continue to make communication difficult and understanding rare,  but through these clashes of cultures, philosophies, and religions, humans, both individually and collectively, are rapidly delineating their differences with each other, only to discover that what matters most is what they care about in common— their highest shared values.

With the notable exception of that (pick a number somewhere under 30) percent who are scared shitless and full of hate (pick a huge number) percent of the time, thanks to a never-ending supply of angry fear pumped into their brain buckets by an assortment of faux news nutboxes and politically motivated hypocrites.  And the only time they care about the rights of others are when gays want to get married, or when their children want to have an abortion, or when Rush Limpbot tells them when, where, and how to do the hokey pokey.

The next instructive wedding of church and state is that of the Hebrews Israelis under United States suzerainty.  For several generations now, a small and decidedly powerful group of Jews has been able to maintain a considerable degree of self-government but relatively little independence from American foreign policy, because of the Iraqis and Iranians to the north and the Arabs to the south, and the Palestinians in their midst.

To be sure, most American Christians have little use for the religion of the Israeli Theocracy;  yet American politics, as full of intrigue as they are, allowed a vocal religious minority to force the hand of their overlords to bring about the ignoble death of one of their enemies— Saddam Hussein.

After Born-again Christian George W. Bush managed to steal the presidential election, and within his first months in office, he put the United States on a course for preemptive war with Iraq.

Where would a sycophantic fetal alcohol syndrome victim and incurious provincial Texas Governor get a shiny new old idea like that?

Ask Richard Perle. Doug Feith. Or Dave Wurmser.  The authors of A Clean Break: A New Strategy for Securing the Realm— where the centerpiece of the recommendations was “the removal of Saddam Hussein as the first step in remaking the Middle East into a region friendly, instead of hostile, to Israel.”

Ian Buruma writing in the NYT:

“Douglas Feith and Richard Perle advised Netanyahu, who was prime minister in 1996, to make ‘a clean break’ from the Oslo accords with the Palestinians. They also argued that Israeli security would be served best by regime change in surrounding countries. Despite the current mess in Iraq, this is still a commonplace in Washington. In Paul Wolfowitz‘s words, ‘The road to peace in the Middle East goes through Baghdad.’ It has indeed become an article of faith (literally in some cases) in Washington that American and Israeli interests are identical, but this was not always so, and ‘Jewish interests’ are not the main reason for it now.

“What we see, then, is not a Jewish conspiracy, but a peculiar alliance of evangelical Christians, foreign-policy hard-liners, lobbyists for the Israeli government and neoconservatives, a number of whom happen to be Jewish. But the Jews among them — Perle, Wolfowitz, William Kristol, editor of The Weekly Standard, et al. — are more likely to speak about freedom and democracy than about Halakha (Jewish law).

Yes;  they’re surprisingly clever fellows, aren’t they.  Why even you forgot about the Israeli government.

What unites this alliance of convenience is a shared vision of American destiny and the conviction that American force and a tough Israeli line on the Arabs are the best ways to make the United States strong, Israel safe, and the world a better place.”

A tough Israeli line. . .  Like the line they were pushing just before Obama’s inauguration.

A shared vision of American destiny. . . of making the world a better place for . . .

But one of “convenience”?
Nuh uh.  ALL Theocons— whatever their national stripe— are on a mission from God. When they get in bed with politicians, whether they are being exploited for their votes, or whether the politicians are actual believers in their doctrines and dogma, the separation between church and state goes right out the bedroom window.  When America’s policies abroad in the world— especially the Middle East— are fashioned from the fossilized church dogma of apocryphal nonsense by elected Christian officials of our government, and the aims of the tribe of Israel to regain its God-given land one way or another, you get War.

We may never know the full extent of the influence of the Church on the Bush administration’s policies of spreading democracy at the point of a gun, or the percentage (pick a wild number, any number)  the Theocons and their religious notions were responsible for war in Afghanistan and Iraq.  But there’s a new Sheriff in town,

with a new vision of what and how the world’s religion and government must learn to cooperate while staying separate and apart, in the interest of making sure what is Caesar’s is rendered unto Caesar, and what is God’s, is God’s. . . 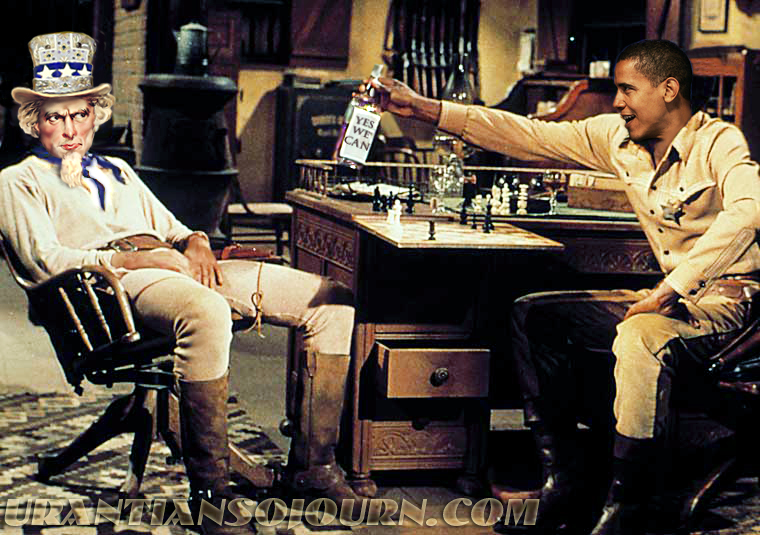 And we should all drink to that.