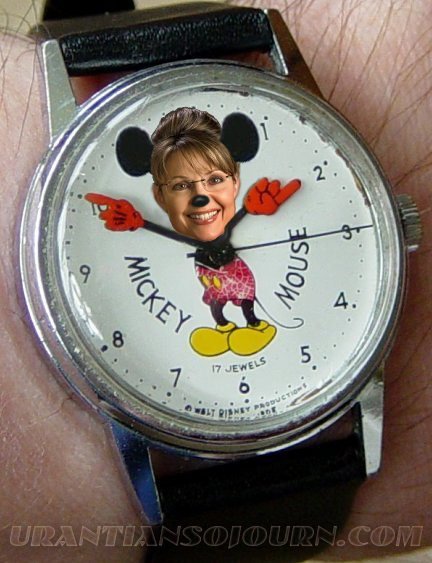 Euripides observed that those whom the gods would destroy they first make crazy.

Today’s NY Times article, Palin’s Long March to a Short-Notice Resignation documents the Greek tragedy that has become Sarah Baradiva’s sorry little life. Proving that the law of karma is chock-a-block full with irony and not a little humor, the writers save the best for last:

At the governor’s Anchorage office, staff members are struggling to roll with Ms. Palin’s surprise announcement. Last week, a clock on the wall continued its countdown. Under a “Time to Make a Difference” placard, the clock ticks away the days, hours, minutes and seconds until the scheduled end to Ms. Palin’s term. As of Friday, it had 513 days left.

“I don’t know how to reset the darn thing.”

Nothing like destroying the village in order to save it.

One would think that the Rethuglicans would have learned their lesson from the last village idiot they set loose upon the country and keep Sarah confined to the attic. While the majority of the party’s elected politicians seem to appreciate that, the party’s biggest noisemakers, the media morons, want her out there front and center, preferably as a guest on their shows to boost ad revenues.

It ancient Roman times, it was a combination of bread and circuses that kept the masses content and the rulers in power. Today, the essential schizophrenia embodied by the Rethuglicans is being exposed, with those who profit from running the circus beating out those who profit by handing out the bread.

Media personalities command annual pay some 20-40 times what a “public servant” earns. And while politicians are free to pocket unspent campaign donations when they retire and cash in other chits like being hired as lobbyists and corporate board members from former donors, media personalities pocket millions every year, not counting book royalties and speaking fees they derive from their celebrity. It will be interesting to see how the Big Money that backs both will bridge the increasing divide.

Politicians naturally have to have a broader, more moderate appeal than their carnival barker counterparts in the blabosphere. The former actually has the burden of governing while the latter only has to keep their low information audiences amused and aroused. Even Crazy Sarah knows that, especially the part about that governing thang.

Let Euripides have the last word:

A coward turns away, but a brave man’s choice is danger.