Winner and Still Champion: Teh Bloviator 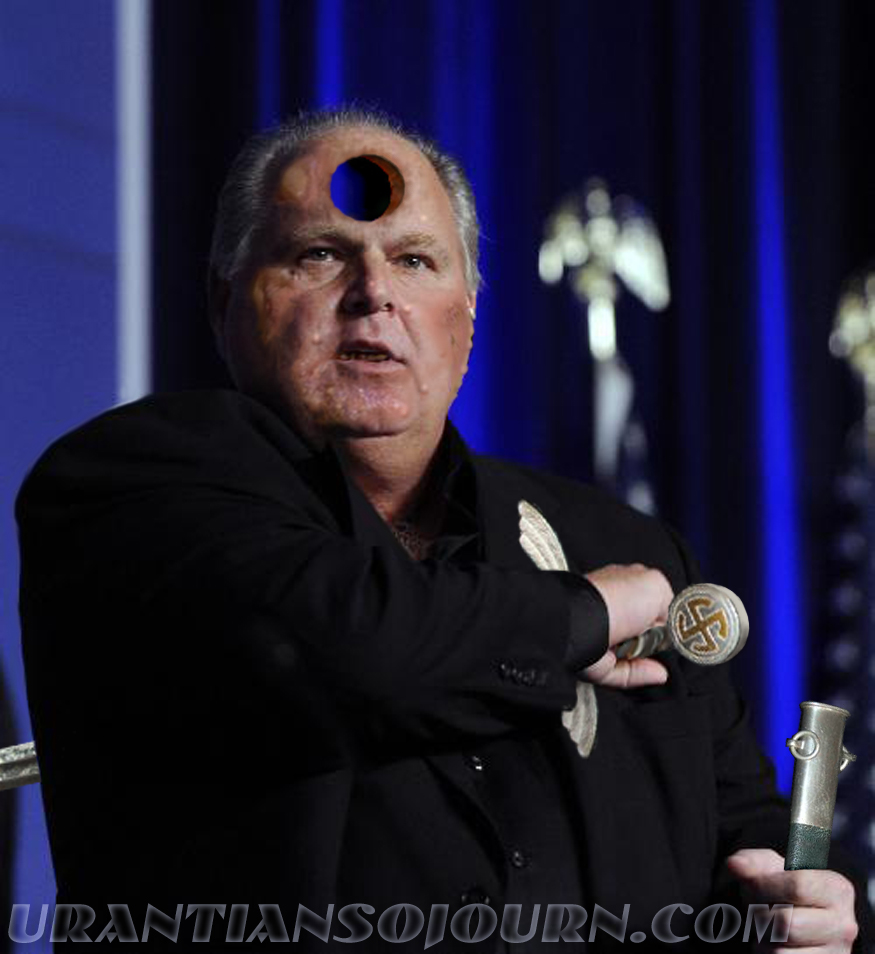 Appearing more diseased and deranged than usual, the defacto head of the Rethuglican party, Bloviator Rush Limbaugh, sporting a positively motivational 65mm hole in his forehead, stunned “inspired” dittoheads by repeatedly plunging a Nazi Air Force officer’s sword through his thorax.  “Now,” explained The Blove, “this would kill your average Obamabot-pantywaist liberal; but as you can see, I remain unfazed.”

When asked the secret to his “amazing longevity” on the radio-thing, Limbaugh said— and we are not making this up—

I think it’s respect for the audience; respect for their intelligence; uhh; and a deep appreciation for what they have meant for my live.  … and I owe it to an audience that has stuck with me through all these years;  why they do it?  It’s a good show;  it’s a fun show; it’s positive! People don’t wanna be beat up every day with, this caffeine product is going to kill ya, or, the seas are risin’ and New York’s gonna get flooded. They wanna hear about greatness!

They want — people wanna be inspired. People wanna be motivated. They want their positive thoughts validated. They don’t wanna hear every day how everything’s goin’ ta hell in a hand basket and there’s a shortage of hand baskets. They don’t wanna hear this. That’s what gets ratings on television. [From the same fricken’ people] Uhh.. I have shown yeh get ratings on radio being positive, respecting the audience, being inspiring and motivational at times, when it’s necessary. I juss try teh share as much of my life experience with everybuddy because, I think it turned out pretty well; I’m very proud of it.”

Well, yeah, fear can certainly motivate the ignorant, and Teh Blove never misses an opportunity to slather on some lying-through-the-teeth bullshit fear-mongering;  so less than three minutes into his little sitdown with Greta Van Whatever,  we get this:

In his fear addled derangement Rush has convinced himself that Democrats are scared shitless of Sarah Palin— honest to God— because she’s so popular and formidable;  and not that a moron actually was a nominee for the vice-presidency— What Carl Bernstein called an “almost unpatriotic act” by McCain— because she’s manifestly unqualified for high office and Democrats know it.  (What the hell was “almost” unpatriotic about it, Carl?)

The clip below is way more Bloviator than you want to listen to, but run through it just to count all the crazy assertions by a man who tells millions of Americans with an i.q. below 102 what to think every week— about everything Rush thinks.  And then tell me that’s cool with you. 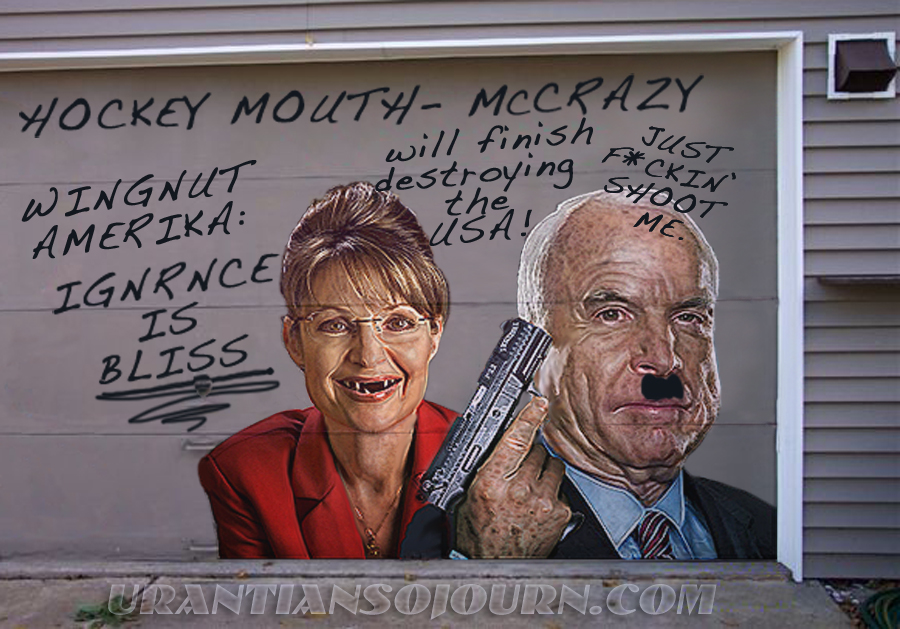 What could drive a law-abiding leftist to vandalism?  Sarah Palin as Vice President to the oldest presidential candidate ever.

Using the Alaskan taxpayer funded annual governor’s picnic to sing her swan song, Sarah Quitter once again tried to conflate her self-image with that of our troops. Playing the victim to the librul media’s unfair and “politically correct” coverage of her, she postures and whines at the same time:

“[How about] In honor of the American soldier, ya quit makin’ things up!”

Accounting for the number of times she has shot herself in her own foot would require one of those air cooled mini Gattling guns Schwarzenneger used in Terminaor 3 to blast away the mechanical minions of an invading fembot from the future. 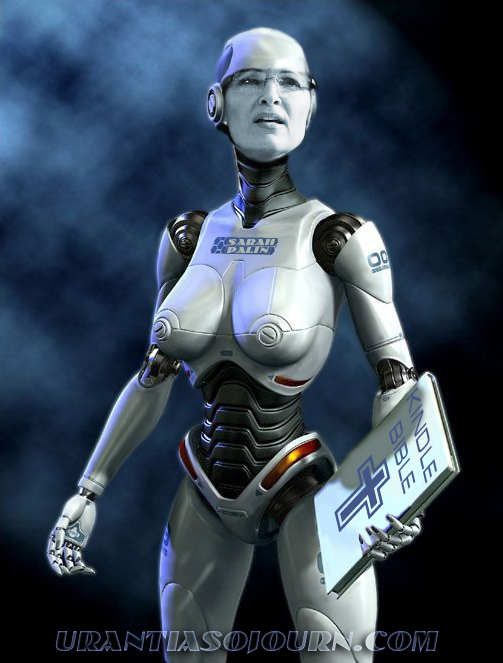 Palin never misses an opportunity to wrap herself in Alaska’s our flag. But for her, “We the People” has morphed into “Me the Narcissist.”

Palin is living proof that even paranoid schizophrenics have “enemies,”and that she is, well, crazy.  There are definitely people who don’t want to be ruled by a militant US theocracy and want her to fail;  and who think she is crazy. (Whether such craziness is a product of genetics, environment, or a combination of both,  I leave to behavioral psychologists to determine.)

Speaking of Hollywood, be afraid, be very afraid.  Those limousine libruls are comin’ to take yur guns away:

Let me tell you, Alaskans really need to stick together on this with new leadership in this area especially, encouraging new leadership… got to stiffen your spine to do what’s right for Alaska when the pressure mounts, because you’re going to see anti-hunting, anti-second amendment circuses from Hollywood and here’s how they do it.  They use these delicate, tiny, very talented celebrity starlets, they use Alaska as a fundraising tool for their anti-second amendment causes.  Stand strong, and remind them patriots will protect our guaranteed, individual right to bear arms, and by the way, Hollywood needs to know, we eat, therefore we hunt.

“Tiny, very talented celebrity starlets?” Methinks she projects too much.

But back to the pseudo issue:  apart from the native Inuits living near the Arctic Circle, the vast majority of Alaskans get their food the same way the rest of America does— from the supermarket.  While providing a tasty high protein supplement to the average Alaskan diet (I once pulled 21 Sockeye from the Copper River in a single afternoon), hunting and fishing is more a recreational pursuit than essential for survival.  It’s not exactly hunting wolves from helicopters, but wolves are kinda tough from what I’ve heard.

Alaskans know all that, but since she’s quitting them, Palin’s remarks were an obvious play to gun owners in the Lower 48 and the Black Helicopter crowd who somehow believe that the Socialist-Fascist Dems are intent on disarming them.  Guns and ammo sales are at record high levels thanks to fearmongers like Palin, Glenn Beck, and Rush Limpbot, warning of impending legislation that exists only in their fevered imaginations, despite a slew of fatal shootings in the last few months by right wing crazies.

Anybody know where I can get a bumper sticker that says: