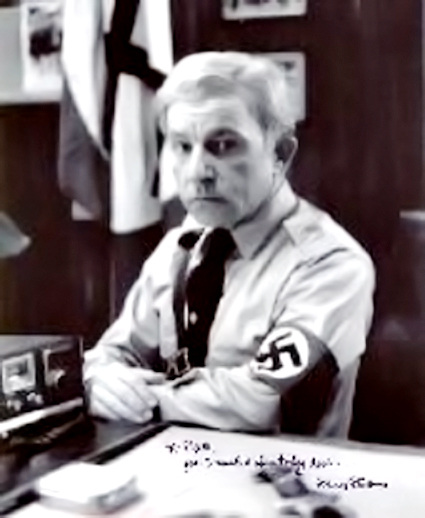 Henry Gibson as a laconic little freak of a Nazi in The Blues Brothers.

MALIBU — Henry Gibson, a wry comic character actor who was an original cast member of “Rowan & Martin’s Laugh-In,” graduated to the next world Monday, from his home in Malibu.  He was 73.

His penchant for quirky dry comedy was perhaps best portrayed in his brief supporting role in The Blues Brothers, but you had to be familiar with his work to really appreciate his character’s nuance in the film. He was usually seen in a crappy little office with a Nazi flag in the background.  My favorite scene had him in full Nazi regalia quietly smoking a pipe while painting a crummy little plastic falcon;  the cheesy goodness of that bit of business was classic Henry Gibson.