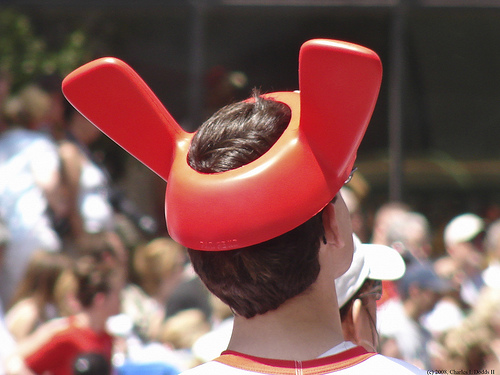 An attendee at today’s teabagger protest on the D.C. Mall

In the never-ending triumph of form over substance, politics over policy, and emotionally charged food fights over actual debate, the MSM occasionally interjects some reality into their coverage of complex issues like health care reform. Example in a moment.

Take the issue du jour— fictional health care insurance for non-documented immigrants, catapulted into our awareness by a former immigration attorney, South Carolina Congressman Joe Wilson.  Wilson interrupted President Obama’s address to a joint session of Congress Wednesday by shouting at him that he was a liar after Obama said there were nothing in the proposals that would extend coverage to said immigrants.  House Bill 3200, the proxy for the other three bills that have made it out of committee thus far, makes that explicit:

Nothing in this subtitle shall allow Federal payments for affordability credits on behalf of individuals who are not lawfully present in the United States.

As far as I can tell, the arguments being made that such language is ineffectual are two-fold.  The first concerns a bill signed into law by President Ronald Reagan requiring that emergency medical care be provided to anyone in need of it.  In other words, if someone shows up at an emergency room gushing blood they don’t have to provide proof of a citizenship before a tourniquet is applied. In an example of gravity defying mental gymnastics, this essential moral fact of life is abstracted and re-packaged into a symbol that is then linked to other symbols to forge another bogus winger narrative:  Providing Good Samaritan care for the undocumented will somehow magically enroll them into a public option insurance policy,  paid for by cutting Medicare for seniors.

The second concerns the rejection of two Rethug amendments that would also require proof of citizenship before enrollment in any government run program.  This amounts to nothing more than grandstanding and playing to their racist base, given the results of a government study cited in an editorial in yesterday’s NY Times titled Health Care and Lies:

For Rethugs obsessed with illegal immigrants, that has to count as a rare example of GOOD and EFFICIENT government spending.

The editorial also says that it is

Time for a reality check. Illegal immigrants are here. They are not eligible for Medicaid, but many still get sick and many get care, often in emergency rooms.”

Which explains that $500 aspirin that shows up on the bills of the already insured. Their insurance companies pay for it without raising a fuss, because they just raise premiums a thousand bucks to insure their own profit margins, including  $25 million CEO salaries.  So we are already paying for the care of the uninsured, but instead of a paying the money to primary care physicians to prevent expensive illnesses, we spend 10x that in emergency room care. Another example of ass-backwards Rethuglican economics, which have never been anything more than a device to increase the wealth of their ruling class masters.

But back to the kind of magical thinking displayed by Wilson and his ilk. In their fevered imaginations, Democratic proposals for health care reform are designed to help invading brown hordes steal their country. Time and time again, immigrants are used as scapegoats for current problems (not unique to this country, for sure). Prior to the current economic collapse, undocumented immigrants were stealing our jobs. Now, thanks to Reganonomics and the deregulation of the financial industry, there are no jobs left to steal. (It was announced this week that California now has fewer jobs then it did in 1999.)

So undocumented immigrants have to be re-purposed, this time by the Medical Mafia as part of its sophisticated and well-funded efforts to derail health care reform. (Naturally, people with the least amount of power to defend themselves make the best scapegoats.)

More interesting, from a sociological perspective, is the neurological fact that the wingers who believe this crap can’t now believe otherwise. For forty years they have been propagandized by experts using modern media to keep them immersed 24/7 in a state of anxiety and fear. Having crossed what Jacques Ellul called the integration or eduction phase of propaganda to the agitation or activation stage, there’s no turning back. Fear and anxiety are supplemented by hate and anger in increasing doses, helping teh crazy to keep its freak on. (Already simmering in Glenn Beck‘s agi-prop pot are attacks on Obama advisers (czars), a press for criminal racketeering charges against ACORN, and coming legislative battles over energy and labor reform.)

Villains are an essential component of this kind of pernicious political propaganda, necessary to satisfy both the narrative and emotional structures of the brain, as well as to justify the feelings of anger, hate, and violence that the propagandist is trying to arouse and redirect.

As Dr. Bryant Welch points out in his book State of Confusion: Political Manipulation and the Assault on the American Mind (often citing Fox News for examples), the continuous repetition of selected words can turn them into symbols with deep neurological roots, capable of exciting repressed emotions stored in the lizard brain.

When combined with other emotionally charged symbols, these can be twisted into a false narrative which is indistinguishable by the brain from the real thing. Cognitive science has shown that hallucinations use the same neural circuitry as does “objective” reality. That’s why a representation of a thing can become the thing itself.

Those of us in the “reality-based” community need a better understanding of how and why the wingers are acting the way they are.