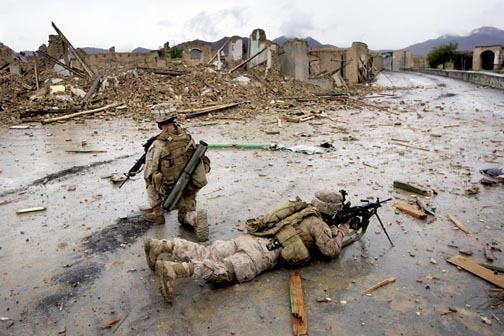 Under its own heading, FEAR OF A FUTILE MISSION INCREASES, Huffpo links to an article in today’s Time’s Online that provides another point of view about current conditions in Afghanistan. While we’ve heard plenty from military commanders, diplomats, politicians, and the punditocracy, we haven’t heard anything from the grunts on the ground who have to actually confront the mess there, up front and personal.

The article, from a British newspaper no less, is titled: American troops in Afghanistan losing heart, say army chaplain

American soldiers serving in Afghanistan are depressed and deeply disillusioned, according to the chaplains of two US battalions that have spent nine months on the front line in the war against the Taleban.

Many feel that they are risking their lives — and that colleagues have died — for a futile mission and an Afghan population that does nothing to help them, the chaplains told The Times in their makeshift chapel on this fortress-like base in a dusty, brown valley southwest of Kabul.

“The many soldiers who come to see us have a sense of futility and anger about being here. They are really in a state of depression and despair and just want to get back to their families,” said Captain Jeff Masengale, of the 10th Mountain Division’s 2-87 Infantry Battalion.

“They feel they are risking their lives for progress that’s hard to discern,” said Captain Sam Rico, of the Division’s 4-25 Field Artillery Battalion. “They are tired, strained, confused and just want to get through.” The chaplains said that they were speaking out because the men could not.

Another point of view missing from the debate is that of the Afghan civilians, who are being killed in record numbers. I suspect that if one made some random phone calls to civilians there and asked how they felt about how being occupied by soldiers from some 42 countries, about how that is working out for them personally, chances are that a significant number of them have had kin killed or severely wounded during the last eight years. Given their tribal and religious beliefs, that means they have a moral duty to take revenge on those who they hold responsible. (As I understand it, that doesn’t include the Taliban, tribal leaders and other local Afghanis fighting to expel the military forces they consider to be infidel invaders.)

Another angle receiving very little if any attention is the business interests of countries like China, who are only too happy to cheer our young troops into battle while they walk out the back door with Afghanistan’s untapped reserves of natural resources. In an op-ed in yesterday’s NY Times titled Beijing’s Afghan Gamble , Robert Kaplan writes:

IN Afghanistan’s Logar Province, just south of Kabul, the geopolitical future of Asia is becoming apparent: American troops are providing security for a Chinese state-owned company to exploit the Aynak copper reserves, which are worth tens of billions of dollars. While some of America’s NATO allies want to do as little as possible in the effort to stabilize Afghanistan, China has its eyes on some of world’s last untapped deposits of copper, iron, gold, uranium and precious gems, and is willing to take big risks in one of the most violent countries to secure them…

Just as America has a vision of a modestly stable Afghanistan that will no longer be a haven for extremists, China has a vision of Afghanistan as a secure conduit for roads and energy pipelines that will bring natural resources from the Indian Ocean and elsewhere. So if America defeats Al Qaeda and the irreconcilable elements of the Taliban, China’s geopolitical position will be enhanced..

One has to wonder how thrilled our troops are about helping the Chinese to make a different kind of killing in Afghanistan, without putting any of their own skin in the game. With apologies to songwriter Jerry Reed:

They got the gold mine, we got the shaft.