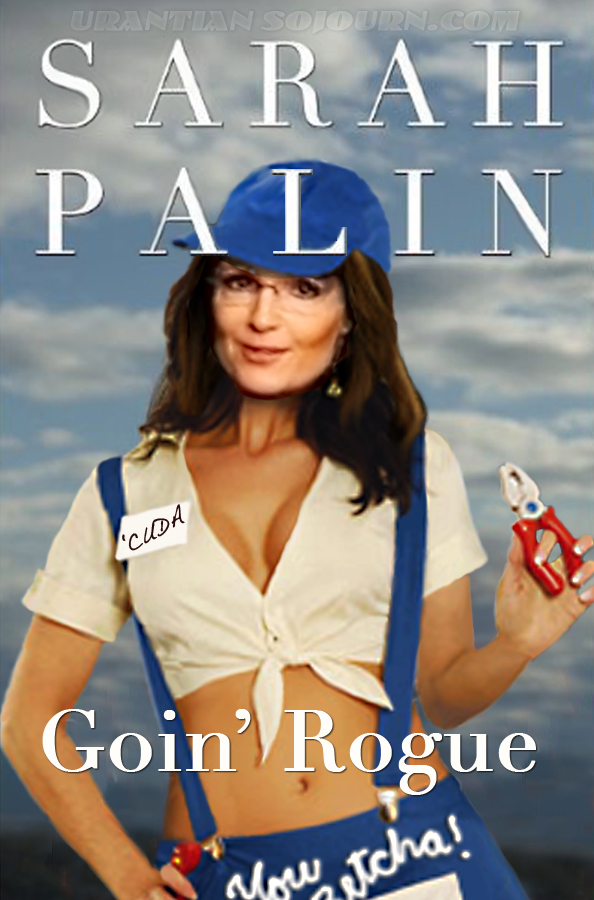 No, this is not a rejected Palin book cover; well, okay, yes it is.
And those snips are not for your nads. Oh, f’n snap; yep, they are.

Wasilly — ALASKA You might know by now that Sarah Palin has been pallin’ around with a wicked extremist ghostwriter. And with the help of this weg, she’s written a 400 page book in less than two months!  And the ink-laden pulp will be on the shelves just in time to celebrate Turkey Day.  But the irony only begins there.

The title of the mini-tome, “Going Rogue” derives, not from the mavericky maverickness of SaraCuda, but from her penchant for running amuck.  Back in the heady weeks of the McCain debacle, an unnamed aid put it this way:

“She is a diva. She takes no advice from anyone,” said this McCain adviser. “She does not have any relationships of trust with any of us, her family, or anyone else.

“Also, she is playing for her own future and sees herself as the next leader of the party. Remember: Divas trust only unto themselves, as they see themselves as the beginning and end of all wisdom.”

Prescient?  You betcha; beyond belief. Playing for her own future? transparently.  No relationships of trust with anyone, including her family?  Yowch;  Levi vindicated.  The beginning and end of all wisdom?  Uh, only in her own mind, of course.  But it is this insular quality that defines Sarah Palin now, and will continue to define her after her second, or even third ghost-written collection of face book-fudge.

The Great White Stoopid will make the Diva of Dumb a millionaire.  They may even make her the permanent spokesperson for the whacktard fringe of the GWS.  But in doing so, they will finally seal her political fate, more so than her own greed and incompetence has. And God be praised;  we’ll never see anymore of her fancy political campaign walkin’ again.  And that’s a damned good thing.