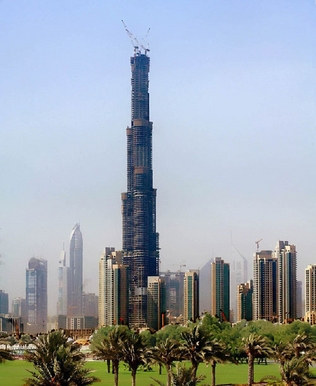 A Dubai skyscraper flipping off the world

The Rolling Depression that began on Wall Street last year just found its next victim, the glittering mirage of a city called Dubai. The announcement last week that it could no longer meet its payment obligations on some $80 billion of debt sent world financial markets reeling.

Dubai is the perfect exemplar of globalism and materialism gone wild. A city with glittering skyscrapers and exotic artificial island resorts, it is built in one of the hottest, most hostile physical environments in the world. Yet it abounds with multi-million dollar condos, ritzy shopping centers, race tracks, the most expensive hotel in the world (cheapest room $2,000 night), the world’s largest indoor ski slope, and verdant green golf courses like the new one just opened by Tiger Woods. (For a guided tour of Dubai, see  60 Minutes‘  Steve Kroft report here. )

Dubai hit the radar screen of most American some three years ago when a proposed deal that would have sold some of America’s most strategic ports to a company controlled by the crown prince of Dubai,  Sheikh Mohammed Bin Rashid al- Maktoum. The deal raised such a howl of protest by both parties in Congress that it was scratched. It had  also become a major problem for Hillary Clinton‘s 2008 presidential primary campaign when it was revealed that her hubby was apparently on Dubai’s payroll. From an April 2008  Bloomberg article:

That may raise new questions about what services he performed for Los Angeles-based Yucaipa, whose investors include the ruler of Dubai, Sheikh Mohammed Bin Rashid al- Maktoum.

Tax lawyers said the Yucaipa partnership income for Bill Clinton looks to be a form of salary.

Just why I consider Dubai a case study in everything wrong with our current greed based and wholly immoral economic system is captured in this article written last week by award-winning journalist, Johann Hari.  It’s worth posting in its entirety.

Dubai is finally financially bankrupt – but it has been morally bankrupt all along. The idea that Dubai is an oasis of freedom on the Arabian peninsular is one of the great lies of our time. Yes, it has Starbucks and Dunkin’ Donuts and the Gucci styles, but beneath these accoutrements, there is a dictatorship built by slaves.

If you go there with your eyes open – as I did earlier this year – the truth is hidden in plain view. The tour books and the bragging Emiratis will tell you the city was built by Sheikh Mohammed, the country’s hereditary ruler.

It is untrue. The people who really built the city can be seen in long chain-gangs by the side of the road, or toiling all day at the top of the tallest buildings in the world, in heat that Westerners are told not to stay in for more than 10 minutes. They were conned into coming, and trapped into staying.

In their home country – Bangladesh or the Philippines or India – these workers are told they can earn a fortune in Dubai if they pay a large upfront fee. When they arrive, their passports are taken from them, and they are told their wages are a tenth of the rate they were promised.

They end up working in extremely dangerous conditions for years, just to pay back their initial debt. They are ringed-off in filthy tent-cities outside Dubai, where they sleep in weeping heat, next to open sewage. They have no way to go home. And if they try to strike for better conditions, they are beaten by the police.

I met so many men in this position I stopped counting, just as the embassies were told to stop counting how many workers die in these conditions every year after they figured it topped more than 1,000 among the Indians alone.

Human Rights Watch calls this system “slavery.” Yet the Westerners who have flocked to Dubai brag that they “love” the city, because they don’t have to pay any taxes, and they have domestic slaves to do all the hard work. They train themselves not to see the pain.

But Dubai’s bankruptcy does not end there: it is ecologically bust. This is a city built in the burning desert, where everything shrivels up and blows away if it is not kept artificially cold all the time. That’s why it has the highest per capita carbon emissions on earth – some 250 percent higher even than America’s. The city has to ship in desalinated water – which is more costly than oil. When it runs out of cash, it will run out of water.

Today Dubai will be bailed out by the United Arab Emirates, the oil-rich country of which it is only one state. But the oil will not last forever. More importantly, there is no Bank of Morality that could provide a bailout for this sinister mirage in the desert.

“Ecologically bust” and then some. I heard Hari on Ian Masters‘ radio show this morning describe how the city has grown so quickly that its sewage system has been overwhelmed. Large dump trunks haul raw sewage from buildings and just dump it into the sea, causing a rash of illnesses for rich tourists and ex-pats going for a little swim of the city’s sparkling beaches. (Reporting same will earn you a quick trip to the pokey, of course.)

Another thing Dubai is noted for is its treatment of debtors. People who can’t pay their bills, including foreigners, are thrown into prison.  Foreigners still in possession of their passports often abandon their cars in the airport with notes saying “Sorry”, and copies of their credit card statements strewn across the dashboards and front seats.