IF you’re like me, a few weeks ago you had never heard of Louie Buller Gohmert.  Probably the only “gohmerty” thing in your cerebrum was a moldy, desiccated old synaptic turdlet of fucktard extraordinaire, Gomer Pyle, the 1960s  cultural antidepressant  in the form of a sitcom featuring Jim Neighbors as a boot-brained marine recruit, who’s only saving grace was that if he had ever made it to the Vietnam War— which raged during the show’s entire run without ever being mentioned— he would have been dispatched within a week.

The Urban Dictionary has way too many definitions of “f’tard”— 339 and counting— because there’s no way to prevent f’tards from writing definitions of f’tard:

4.  Noun. A combination of the word “fuck” (to fornicate) and the word “tard” (to delay).  Therefore, a fucktard is a girl who won’t let you fornicate with her until like the third or fourth date.

5.  A leotard with a hole in the crotch instead of snaps so you can get some quick in and out action between ballet performances.

8.  NOT A CONTRACTION FOR “FUCKING RETARD”! Those who are truly “retarded” are not responsible for their affliction. True Fucktards are 100% responsible for their situation and provide vast entertainment as they are usually blissfully unaware of their own Fucktardery. Most politicians for example.

3.  An alias that is used by a very clever person to make Mensa members look like idiots on discussion boards.

21. George “Dubya” Bush The 43rd President of the United States of America – George Walker Bush.  “How the fuck is this fucktard the leader of the free world?!”

And on and on like that, only more juvenile;  for 50 pages.  And now, some f’tards have gotten together and actually produced a magazine.  Of course I am a F’TARD subscriber, and the December issue is in my hands as I write this.

So, like a mind controlling eel from The Wrath of Khan, Buller Gohmert has wriggled into our auditory canals with a series of fuctard stupid human tricks, like holding up signs advertising his fuctardery during President Obama’s address to the Congress. 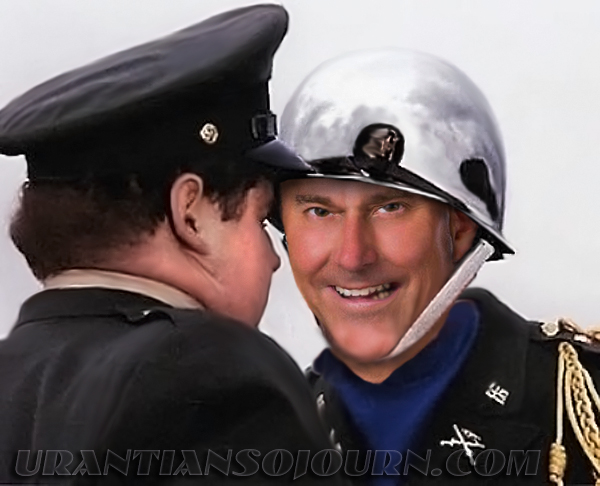 L. Buller was a real life Doug Niedermeyer, as a Brigade Commander of the Core of Cadets at Texas A & M.  Now he’s bringing disgrace to another House.

And now Buller is on the cover of F’TARD, along with A-TEAM f’tards like Beck and Hannity.  And for what, you ask?  This is the fucktard  who stood on the House floor and said, “[President Obama’s] socialist health care … is going to absolutely kill senior citizens.  They’ll put them on lists and force them to die early.”

There isn’t anything you need to know about Buller other than he should never have been elected to public office, and should be removed from public office at the first legal opportunity.  And. He should also have a new paragraph in his Dikipedia page giving him credit for linking up “Gomer” and “douchebag” with fucktard in the minds of the lovers of political satire.

Now if you’ll excuse me, I’m going to reline a certain African Grey’s cage floor with this month’s F’TARD.