Ya know, I was trying to think about who he was tonight. And uh, It’s interesting: he is post-racial, by all appearances. Uh, ynow I forgot he was black tonight, for an hour. You know, he’s gone a long way to become a leader of this country, and past so much history, in just a year or two. I mean, it’s something we don’t even think about. I was watching, I said, wait a minute! he’s an African American guy in front of a bunch of other white people. And here he is president of the United States and we’ve completely forgotten that tonight — completely forgotten it! I think it was in the scope of his discussion. It was so broad-ranging, so in tune with so many problems, of aspects, and aspects of American life that you don’t think in terms of the old tribalism, the old ethnicity. It was astounding in that regard. A very subtle fact. It’s so hard to talk about. Maybe I shouldn’t talk about it, but I am. I thought it was profound that way.


You know, epiphanies are good. Sudden insights can be breakthrough moments where personal ground is gained, where real inner progress is made. You might even feel a tingle down your leg. Yes, even insufferable wags can have genuine epiphanies. So when Chris Matthews thinks he has one on the air and shares it with the rest of us, it’s worth examining if for no other reason than to see if it can help us have one, too.

And that is what is so ludicrous about Chris Matthews’ “epiphany.” Unlike many Americans, Matthews apparently didn’t have an epiphany around the fact that Barack Obama— no matter what he may physically look like— is also “half white.” Let me visually spell it out for you: 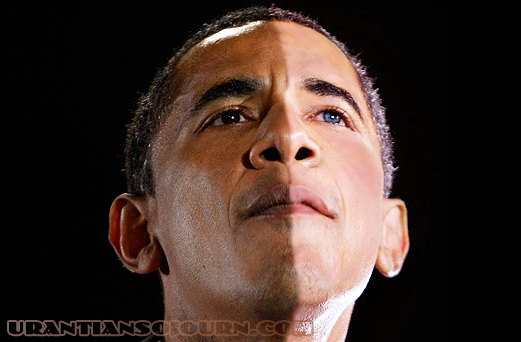 ” . . .it’s hard not to notice that Matthews stepped on his own observation in a strikingly clumsy way. He’s impressed by how irrelevant race is in evaluating Obama … which leads him to immediately talk about race in evaluating Obama.

It’s also troubling because of Matthews’ history when it comes to his preoccupation with issues related to racial identity. During the 2008 campaign, for example, Matthews argued on the air that Obama’s appeal may be limited to “people who come from the African-American community and from the people who have college or advanced degrees,” but not with “regular people.” It was an observation that was offensive on multiple levels.

Is Chris Matthews racist?  No.  And Yes.  He’s not a racist the way a Tea-bagging RWNJ is, who hates Obama because he’s the “other.”  But he is racist in the way someone like him can’t understand the fact that race is not transcended by “forgetting the president is black for an hour”— but rather by knowing and understanding that race is only transcended by Love. That the very real physical and intellectual differences of race can only be truly transcended by a personal experience of love that recognizes and accepts all men as brothers.

But human beings cannot truly love their fellow beings by a mere act of the will, much less simply forgetting for an hour someone is “different” from them.  Love is only born of thoroughgoing understanding of our neighbor’s— or our president’s— motives and sentiments.  But social consciousness must finally be unselfish and objective— a religious consciousness— otherwise it remains a purely subjective philosophic abstraction, and devoid of love.  Consequently, only a God-knowing individual can truly love another person— president or pauper— as he loves himself.

So just how do you feel the absence of something like race in a room? By not hearing some jackass like Joe Wilson shout out his disrespect for Obama, the African American president? And even if Matthews didn’t personally feel it in that room, he admitted that it’s “still going to be out there in American life.” Indeed.

Keep diggin’ that hole, Tweety. But you better be careful. Some day you won’t be able to haul your ass out of it.

The brotherhood of man is, after all, predicated on recognition of the fatherhood of God. The quickest way to realize the brotherhood of man on Urantia is to effect the spiritual transformation of present-day humanity. The only technique for accelerating the natural trend of social evolution is that of applying spiritual pressure from above, thus augmenting moral insight while enhancing the soul capacity of every mortal to understand and love every other mortal. Mutual understanding and fraternal love are transcendent civilizers and mighty factors in the world-wide realization of the brotherhood of man.
— The Urantia Book