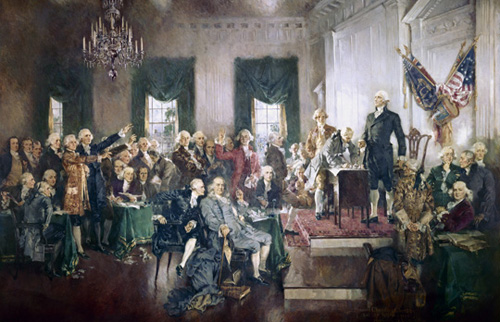 Where did it all go wrong?

The great struggle in the evolution of government has concerned the concentration of power. The universe administrators have learned from experience that the evolutionary peoples on the inhabited worlds are best regulated by the representative type of civil government when there is maintained proper balance of power between the well-co-ordinated executive, legislative, and judicial branches…

If men would maintain their freedom, they must, after having chosen their charter of liberty, provide for its wise, intelligent, and fearless interpretation to the end that there may be prevented: 1. Usurpation of unwarranted power by either the executive or legislative branches….

Interesting that when the Rethugs control the executive branch, the pendulum of power swing to the executive; and when they don’t control the White House, the power still swings their way in the legislature, even when they comprise a significant minority thereof. Heads they win, tails we lose.

For instance, consider the case of Rethug Senator Richard Shelby. As Josh Marshall over at TPM observes today, Shelby is holding the executive branch hostage until the Dems agree to his extortion demands:

You’ve seen the reports that Sen. Richard Shelby (R) of Alabama has taken the perhaps unprecedented step of placing holds on ALL of President Obama’s nominees until he gets the money for a couple of big earmarked pork barrel projects he feels entitled to back in his home state.

It’s an eye-popper no doubt, with gallons more audacity than Obama ever could have hoped for…

David Dayen at Firedog provides the details of how just this one Senate rule helps insure the interests of the Ruling Class, no matter which party happens to be in the majority:

This has, depressingly, become a standard process in the Senate. Republicans place a hold on every nominee, forcing the filing of cloture, followed by 30 hours of debate, followed by a vote, followed by 30 hours of post-cloture debate. Frequently the post-cloture time is waived because Senators what to get out of town for the weekend. This week the Senate basically moved 2 nominees, and nothing else. Moving 70 nominees would take 8 months, under this standard. But it’s not REALLY an obstacle. If it was, Ben Bernanke wouldn’t be celebrating his second term at the Federal Reserve; there were multiple holds out on him.

Indeed, which only underscores what individuals like Ralph Nader and Noam Chomsky have been saying for decades:  The Dems and Rethugs represent two wings of the same corporatist party. Our two party system, the rationale for which is to be found nowhere in the US Constitution, greatly simplifies the process of corruption. Sure, the Dems have allowed a few more scraps to fall from the Masters’ table, marginally improving the life of the peasants that produce and cook the food and maintain the castle. But that will take a dramatic change for the worse in the wake of the Supreme Court’s ruling in Citizens United,  which will open the floodgates of unlimited corporate campaign cash.

So here’s the question: Are the Senate Democrats throwing in the towel? Are they content to let the Rethugs obstruct the basic functions of government? Will they continue to be complicit in the Rethugs’ stated goal of insuring the failure of the Obama’s presidency, and by extension, the American commonwealth? Will Harry Reid mount his his trusty white steed and ride to the rescue by starting a major overhaul of the Senate rules?

Many of the changes in American politics over the past three decades have involved the two parties slowly doing away with social norms that preventing [sic] them from using every tool at their disposal. The Senate minority could filibuster every single bill the majority proposed, but you just didn’t do that, until you did. You could use a House-Senate conference to introduce completely new provisions into a bill, but you just didn’t do that, until you did. (The topic became common in the Bush administration.) The possibility was always there to use endless amendments to filibuster a reconciliation bill. But nobody thought to do that until Republicans floated the tactic this week. The “hold” is a now similar tool to what the filibuster was forty years ago. It’s a sparingly-used weapon meant to signal an unusually intense preference. A Congressional scholar reports that putting a blanket hold on all the president’s nominees has never been done before. But there’s no rule that says you can’t. It’s just not done, until it is.

For decades, when people have asked me my outlook for serious political change, I  have described myself as a curable optimist. Now, if it weren’t for the heroic efforts of the Senate’s only self-identified socialist, Bernie Sanders, and a scant few other honest politicians, Id have to count myself as completely cured.