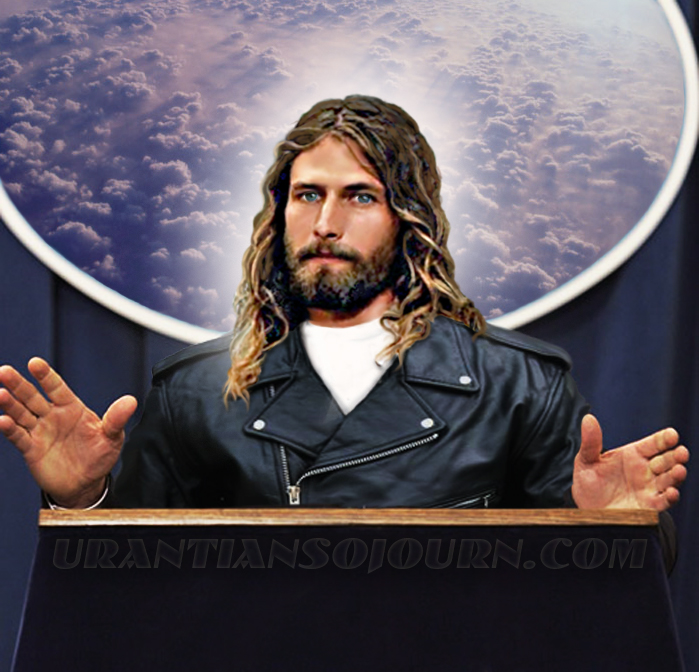 WASHINGTON — A man claiming to be Jesus of Nazareth took the Bainbridge House podium by surprise Monday at an extraordinary press conference. Over 120 journalists, government, and religious leaders had gathered there after receiving what many of them called “uniquely convincing” personal email invitations asking them to attend the event.  The President and First Lady were no-shows, but the Vice President, the respective leaders of the House of Representatives and the Senate, as well as what passes for the Supreme Court, were all in attendance.

The extraordinary event began unfolding at approximately 9 AM EST at the Bainbridge House Ballroom when a man with shoulder-length blond-streaked hair,  approximately six feet in height, wearing a black leather motorcycle jacket over a white t-shirt, bluejeans, and motorcycle boots, just appeared “out of nowhere”— according to several eyewitnesses— and strode to the podium and exclaimed:

A few gasps, followed by nervous chuckles tittered around the room, but the speaker took no notice and continued, delivering the following statement:

“I would speak to you today regarding the need for you to love one another— to love one another with a new and startling affection, even as I have loved you;  you are to serve all men as I have served you— with understanding sympathy and brotherly affection.  Fellowship all your brethren, whether they be white or black, brown or yellow, rich or poor, learned or unlearned.  You are all the children of light; therefore do not stumble into the misunderstanding entanglements of mortal suspicion and human intolerance.

“I lived a life in the flesh among you to show how you can, through loving service, become God-revealing to your fellows, even as, by loving you and serving you, I am God-revealing to you. I lived among you as the Son of Man so that you, and all others, might know that you are all indeed the sons of God.

“From this day forward you should serve mankind with a new and amazing devotion, even as I served you.  And when men see you so love them— and when they behold how fervently you serve them— they will perceive that you have become faithful friends of the celestial world, and they will follow after the Spirit of Truth which they see in your lives, to the finding of eternal salvation.

“When, by living faith, you become divinely God-conscious, you are then born of the spirit as children of light and life— even the eternal life wherewith you shall ascend the universe of universes and attain the experience of finding God the Father on Paradise.  Love all men as I have loved you;  serve your fellow mortals as I have served you.  Freely you have received, freely give.

“Are there any questions?”

The room had been stunned to silence, and several seconds passed before the Speaker of the House, Paul Ryan,  rose awkwardly to his feet with arms crossed, saying, “I’m sure you think this ‘biker’ get-up you have on, and what not, is clever, but I notice you didn’t offer any kind of proof that you are who you said you are?” Vice President Pence, sitting beside him, nodded his fervent approval.

But by this time, everyone else in the room had become transfixed by a gradually appearing and unusual, but clearly visible light that emanated from this fellow’s countenance, and that his voice was also unusual in a very pleasant and even charming way.  And yet, Ryan and Pence seemed entirely oblivious to the fact that everyone else in the room was witnessing a numinous appearance— a freakin’ apparition— of someone apparently not of this material world, despite the fact he looked “perfectly human.”

Then this shimmering person, “Jesus of Nazareth” smiled down on him saying, “I declare that you already have sufficient evidence to enable you to make your decision.  Besides;  if it were not so— I would not have told you.”

At this, Ryan rolled his eyes, threw up his hands and began pushing past the legs of those sitting beside him.  The Vice President and several other prominent Republican congressmen took his cue and began sheeple-ing out of the rows.

The Jesus guy points to the raised hand of NBC’s Chuck Todd:  “Thanks for inviting me, Jesus, um, I’m glad to be here, but I must say I’m kind of puzzled by your references to loving one another, which of course is a fine thing, for sure, don’t get me wrong, but why are you telling us this now, when it’s been in the Bobble, er, the Bible, excuse me, for like 2,000 years or so?  And, you know, it hasn’t helped us all that much;  so I mean, I guess my question is, what’s the point?  Do you think it’s going to help us do our jobs better, stop wars, or you know, maybe solve some of, or any of, our government’s problems?”

Jesus guy says, “Does not your Bible command you to “Render unto Caesar the things that are Caesar’s, and unto God the things that are God’s?  Why then do you confuse the two?  There cannot be any disagreement between these two requirements, the one being material and the other spiritual.

“The call of love of the spiritual world should prove to be the effective destroyer of the hate urge of the unbelieving and war-minded citizens of the nations.  But these material-minded sons who sit in darkness will never know of your spiritual light of truth, Chuck, unless you draw very near them through your unselfish social service, which is the natural outgrowth of the bearing of the fruits of the spirit in the life experience of each one of you.”

There was no follow-up from Chuck.

The little flock of Republicans resumed shuffling towards the exit, and Jesus guy gestured towards them saying,
“As you see, many of your fellows now stand at a parting of the ways;  and I say to many before me this day— you are now confronted with the necessity of choosing which way you will go;  and I say to you, as Joshua said to your forefathers, ‘choose you this day whom you will serve.’ ”  His eyes slowly scanned the entire room;  no one rose to speak.

Then he said, “Fear not the resistance of evil, my children;  for I am with you now and always, even to the end of the ages.  My peace I leave with you.”

And he instantly vanished from sight.