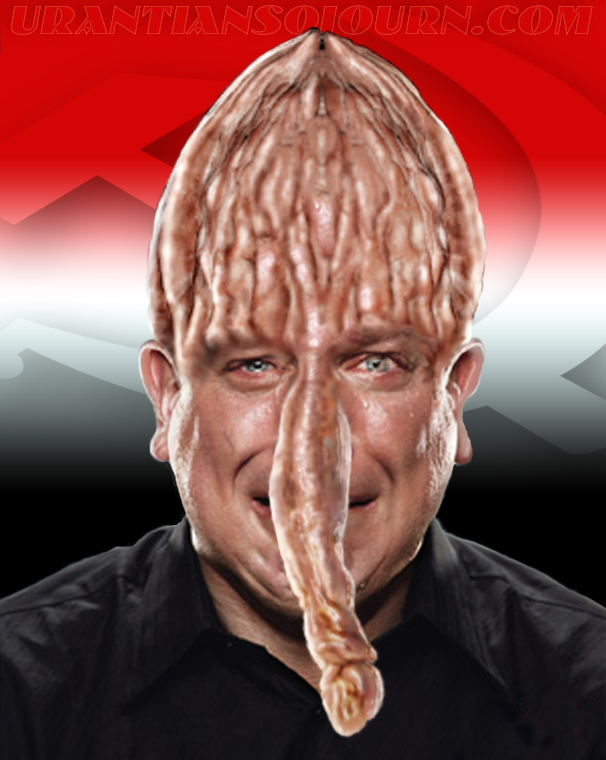 The Face of Fox News: A weakling psychopathic propagandist

The quality of the social torchbearers will determine whether civilization goes forward or backward. The homes, churches, and schools of one generation predetermine the character trend of the succeeding generation. The moral and spiritual momentum of a race or a nation largely determines the cultural velocity of that civilization.
—The Urantia Book

“Torch me up, Scottie!” is not an entirely oblique reference to the amazing Star Trek sci-fi process of reassembling a person from one physical location to another—  and one that thoughtlessly assumes that all their personal and intangible values and principles, as well as their miscellaneous mental crapage— mysteriously goes right along with them.  Without getting into the cosmological bolts and nuts (well maybe the nuts) of how that’s ever going to be possible, I still want to steal it.  Only by “Torch me up,” I mean, get yourself turned into a social torchbearer— of dramatic social change.

And one more oblique sci-fi reference.  In the film, 2010, the iconic black Monolith suddenly appears on the surface of Jupiter as a vast population of Monoliths, increasing in number exponentially, shrinking Jupiter, increasing its density, and ultimately destroying the entire planet.  Something calamitous is unfolding, and indeed, the planet contracts, and explodes; the wondrous and unforeseen result:  Jupiter is transformed into a light and life giving star for the surrounding moons.

Like Jupiter, we are fast approaching a calamitous explosion/transformative event on Urantia;  especially here in America.
Two ideological groups are on a collision course.  The usual broad-stroke shorthand is Liberal and Conservative, left and right;  the nuances of  “Democrat,” “Republican,” “libertarian,” “Tea Party,” are, for all practical purposes, meaningless.  The impending collision is being hastened by our nation’s intensifying polarization around these two convoluted ideologies, and in large part, we have various “social torchbearers” to thank for it.   We are approaching the parting of the ways, and even the slow of wit and poorly informed are aware of the immediacy of this confrontation.

The de facto social torchbearers for the Theo-Conservative Right are many, the most virulently destructive and dangerous arguably being Limbaugh, Beck, and Coulter, followed closely by a bevy of elected, resigned, and more or less deranged others.  Naming the social torchbearers on the Left is far more difficult, and that’s part of our problem;  we don’t really have any.  Sure, Rachel Maddow and Keith Olbermann report the news with a genuine grasp of reality as sane and intelligent people understand, but they are still news people, not torchbearers.  That might change, but who? and when?

Ideals elevate the source of the social stream. And no stream will rise any higher than its source no matter what technique of pressure or directional control may be employed. The driving power of even the most material aspects of a cultural civilization is resident in the least material of society’s achievements.

The “ideals” of early 21st century America are seriously corrupted by wide-spread greed and epidemic fear;  you already know the litany of this abuse and decay:  warrantless wire-tapping, torture, lying, all wrapped in appallingly smarmy hypocrisy.  Our country’s ideals and values— especially their religious roots— are undergoing the most rigorous testing in the short history of our nation, and any progressive resolution of this period of trial is far from settled. We could just as easily go backward as forward. 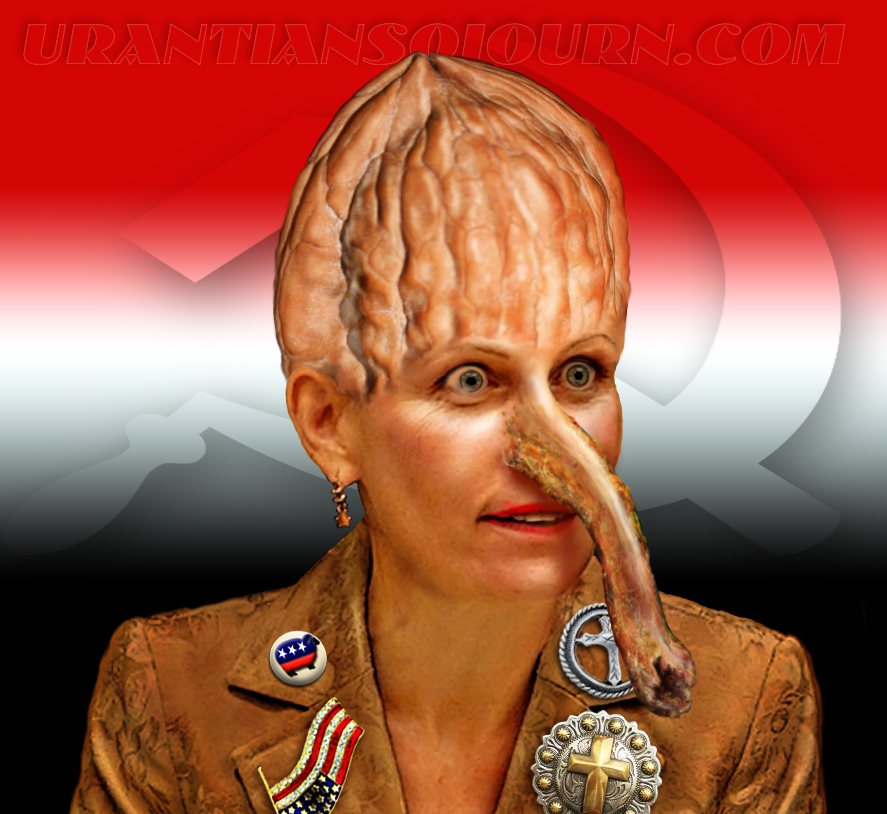 So it’s more than a passing tempest brewing in an ugly little teapot that Beck has put on boil;   his recent attack on one of the core principles of Christianity, “social justice,” is really a gauntlet thrown down, not just to the leaders of Christianity, but to all moral Americans. His latest excuse for not having an adult conversation with Jim Wallis over his arrogantly stupid remarks about social justice is that he’s been investigating Wallis and his “cute” friends for the past eight weeks, and he’ll be “dropping the (communist?) hammer” on poor Mr. Wallis, as soon as he sees fit.

Intelligence may control the mechanism of civilization, wisdom may direct it, but spiritual idealism is the energy which really uplifts and advances human culture from one level of attainment to another.

If we are to survive the cataclysmic days ahead, the majority of America’s progressive thinkers and doers are going to have to discover their personal spiritual idealism of the true, the beautiful, and the good.  There simply is no more breathing room for the failed ideologies of selfishness, fear, and greed.  The bearers of such worthless values must be extricated from our political arena.

Christianity, today, has become a religion well adapted to the social, economic, and political mores of the white races.  It has long since ceased to be the religion of Jesus, although it still valiantly portrays a beautiful religion about Jesus to such individuals as sincerely seek to follow in the way of its teaching. It has glorified Jesus as the Christ, the Messianic anointed one from God, but has largely forgotten the Master’s personal gospel: the Fatherhood of God and the universal brotherhood of all men.

And therein lies a conundrum. Institutional Christian religions are caught in the stalemate of a vicious circle:  Theyt cannot help reconstruct society without first reconstructing themselves;  and being so much an integral part of the established order, they cannot reconstruct themselves until society has been radically reconstructed.

Early Christianity was entirely free from all civil entanglements, social commitments, and economic alliances. Only did later institutionalized Christianity become an organic part of the political and social structure of Occidental civilization.  The kingdom of heaven is neither a social nor economic order; it is an exclusively spiritual brotherhood of God-knowing individuals.  True, such a brotherhood is in itself a new and amazing social phenomenon attended by astounding political and economic repercussions.

“…astounding political and economic repercussions.” This is the droid we’ve been looking for. Are you trying to imagine how far away we are from an “…exclusive spiritual brotherhood of God-knowing individuals”??  Forget about it.  Sudden dramatic change is part and parcel to evolutionary change;  it’s called mutation.  But what will trigger it?  and what will astounding political and economic repercussions look like? That’s what we must begin to imagine.

The religionist is not unsympathetic with social suffering, not unmindful of civil injustice, not insulated from economic thinking, neither insensible to political tyranny. Religion influences social reconstruction directly because it spiritualizes and idealizes the individual citizen.

Where does the answer lie?
Living from day to day
If it’s something we can’t buy
There must be another way

Thank you, Sting and the Police. Once you recognize you’re a Spirit— we are all spirits living in a material world—  spiritualized and idealized individual citizens can set about reconstructing our society, renewing our social contract with each other.

The attainment of a high cultural civilization demands, first, the ideal type of citizen and, then, ideal and adequate social mechanisms wherewith such a citizenry may control the economic and political institutions of such an advanced society.

The church, because of overmuch false sentiment, has long ministered to the underprivileged and the unfortunate, and this has all been well, but this same sentiment has led to the unwise perpetuation of racially degenerate stocks which have tremendously retarded the progress of civilization.

And they’re retarding it right now.  Sure.  Liberals are well-equipped intellectually to eviscerate the illogical, inconsistent, and often insane arguments of conservatives and Tea Partiers, but they largely fail to recognize that the growing number of such ignorant people, easily manipulated by fear and hate, presents a real danger to democracy, the true principles it is founded upon, and the worthwhile values inherent in it.  We are beginning to reap the harvest and see the real cost of allowing ignorant propagandists like Beck and Limbaugh to run unencumbered and essentially unchallenged over America’s media airwaves for years.  Find me a tea partier who doesn’t marinate their brain hour after hour, week after week, year after year with Limbaugh, Beck, or some other propagandist from Fox News or hate talk radio, and I’ll eat Glenn Beck’s snood. Raw.

The great weakness of all this unrecognized and unconscious type of religious activity is that it is unable to profit from open religious criticism and thereby attain to profitable levels of self-correction.  It is a fact that religion does not grow unless it is disciplined by constructive criticism, amplified by philosophy, purified by science, and nourished by loyal fellowship.

The attack against Christians by Beck may turn out to be the most interesting opportunity for Religion to finally provide some genuine open criticism of itself, and quickly provide the sort of self-correction Christianity so desperately needs. You go Jim Wallis, and don’t stop until Christianity is once again the religion of Jesus; not just a religion about Jesus.

There is always the great danger that religion will become distorted and perverted into the pursuit of false goals, as when in times of war each contending nation prostitutes its religion into military propaganda. *

The religious Right in this country has done exactly that.  But.  All is far from lost. Religious leaders like Jim Wallis can become Social Torchbearers who espouse the spiritual idealism so necessary to elevate our national values to where they belong, and even beyond. Just remember. It takes transformed individuals to transform society. 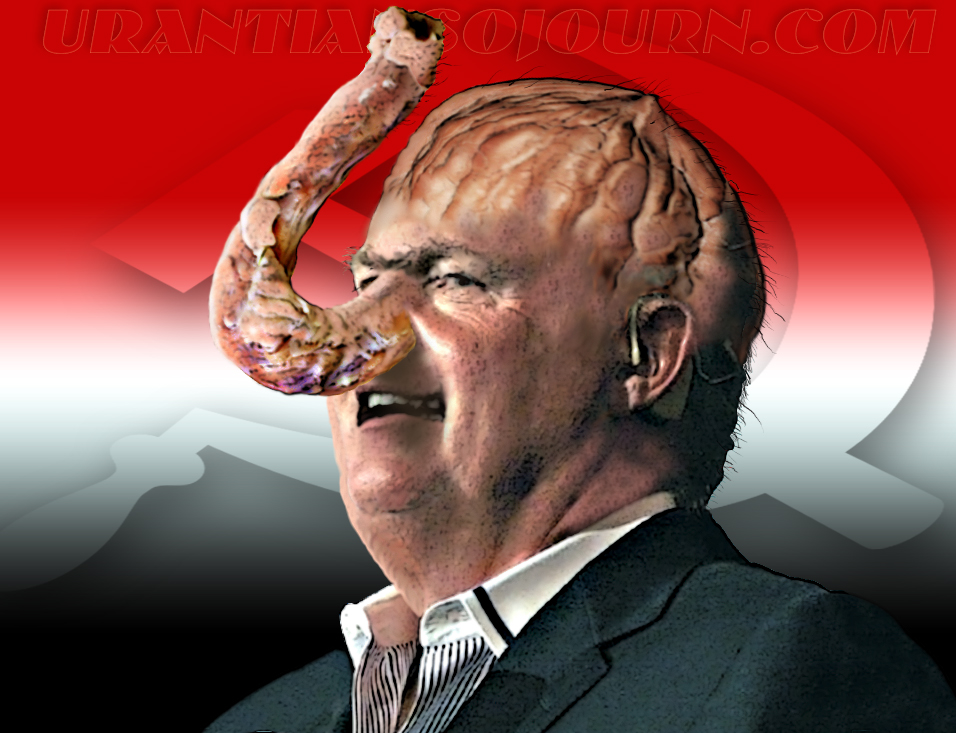 The assinine (sic) face of egomaniacal bigotry and ignorance

Religionists, as a group, must learn to never concern themselves with anything but religion— with the understanding that any one such religionist— as an individual citizen— may certainly become involved with, even the leader of, any social, economic, or political reconstruction effort.  In other words, a real Social Torchbearer.  It’s always been the business of real religion to create, sustain, and inspire the kind of cosmic loyalty in the individual citizen as will inspire them to success in the advancement of all these difficult, but desirable social services.

No matter what upheavals are coming to re-define the social and economic growth of our civilization, religion is going to be worth while if— if— it fosters in the individual an experience in which the sovereignty of truth, beauty, and goodness prevails;  for that is the true spiritual concept of supreme reality.  And through love and worship, this becomes meaningful as fellowship with all mankind, and sonship with God.  Torch me up.

* All blue italics are excerpts from The Urantia Book