According to Rep. Brian Bilbray* (Rhoid-Calif.), “trained professionals” can identify illegal aliens just by looking at their clothes.

Clothes make the man. Naked people have little or no influence on society.
—Mark Twain

Chris Matthews of MSNBC’s Hardball, asked Rep. Brian Bilbray to cite a “non-ethnic aspect” law enforcement agents could use to identify illegal immigrants.  “They will look at the kind of dress [sic] you wear, there is different type of attire, there is different type of— right down to the shoes, right down to the clothes,” said Bilbray.  Of course, law enforcement would never never ever detain brown people based solely on clothing, Bilbray sputtered. 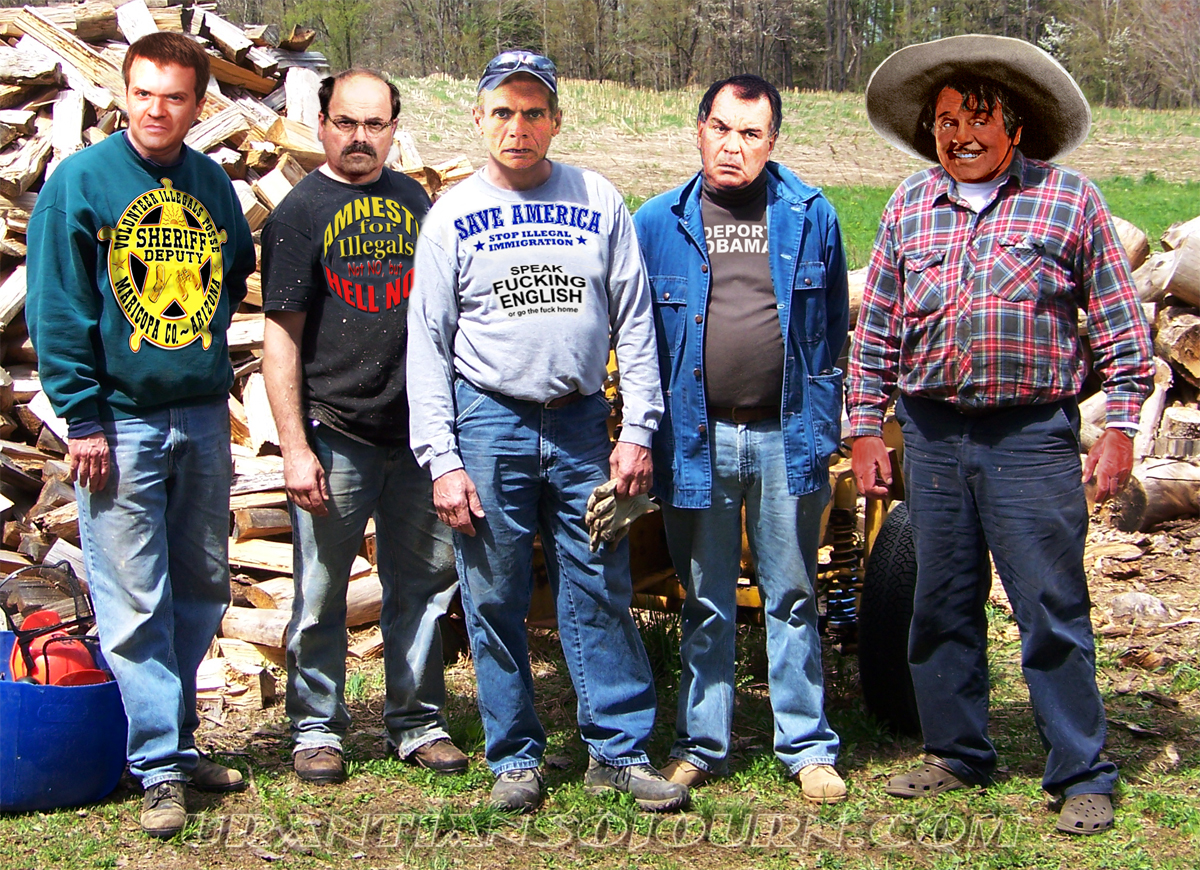 Curious how well clothing profiling works, we gave this photo of five workers to highly trained Arizona professionals, and asked them to find the undocumented worker/illegal alien, using their special clothing profiling skills.
Their crack team of experts went right to work, and in a few minutes compiled the overlay below: 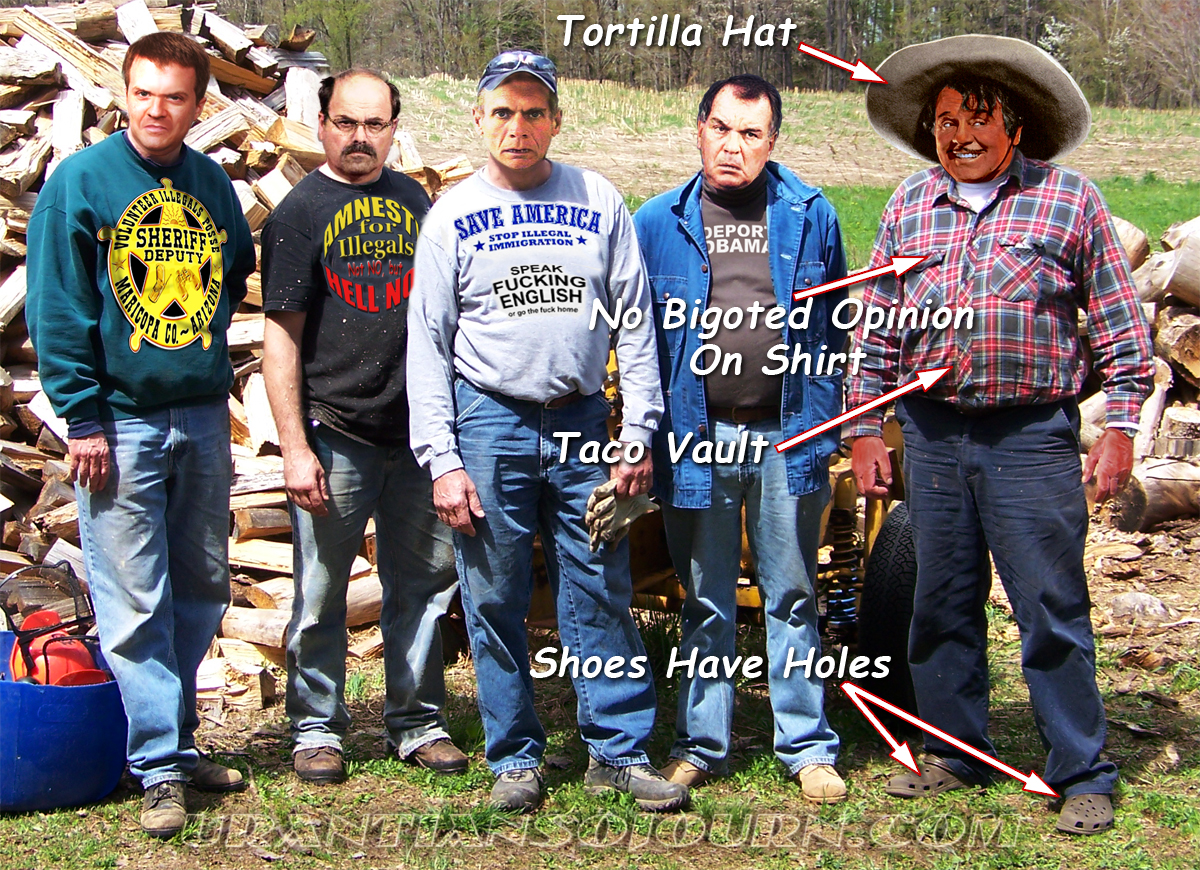 If you want to read the shirts, you must click it.

Gerry Hasty, a top Arizona clothing profiler, said this was a simple analysis, and pointed out the “give-away” clues indicated on the photo by the white arrows: “You’ve got the typical headgear there,” said Hasty, “the tortilla hat. Always a dead give-away.”
“Then there’s his white t-shirt without a pro-American slogan on it, though it could be covered up.  Real Americans in t-shirts get their message out;  just look at those other guys.  You’ve got an illegal immigrant posse Deputy Sheriff sweatshirt there, for cryin’ out loud,” said Hasty. “That’s a real American, puttin’ his money where his mouth is.”

Hasty chuckled and said, “Yeh, ‘Pancho’ there’s got a good-sized taco vault goin’, too.”  “Taco vault?” inquired our reporter.  “Yeah, you know, his ‘tortilla tub,’ that’s what we professionals call it.  It’s a very common indicator.  But the real give-away, of course, is the holy shoes.”

Our reporter, John Doeh, suggested to Hasty that the fellow was wearing “Crocs,” a sort of rubber garden shoe that originated in Colorado;  he got a long blank stare.
That was his cue to reveal there were no undocumented workers in the photo;  the man the Arizona professionals had picked as the illegal alien was, in fact, a Mr. Leo Corillo, a natural born American citizen and the owner of the property which employed the four Caucasians, none of whom were in the United States legally.  All four men also have active federal warrants for various felonies, and were not-so-cleverly disguised as “patriotic Americans.”

“You set us up, you asshole!” stammered Hasty, as the door hit him in the ass on his way out. 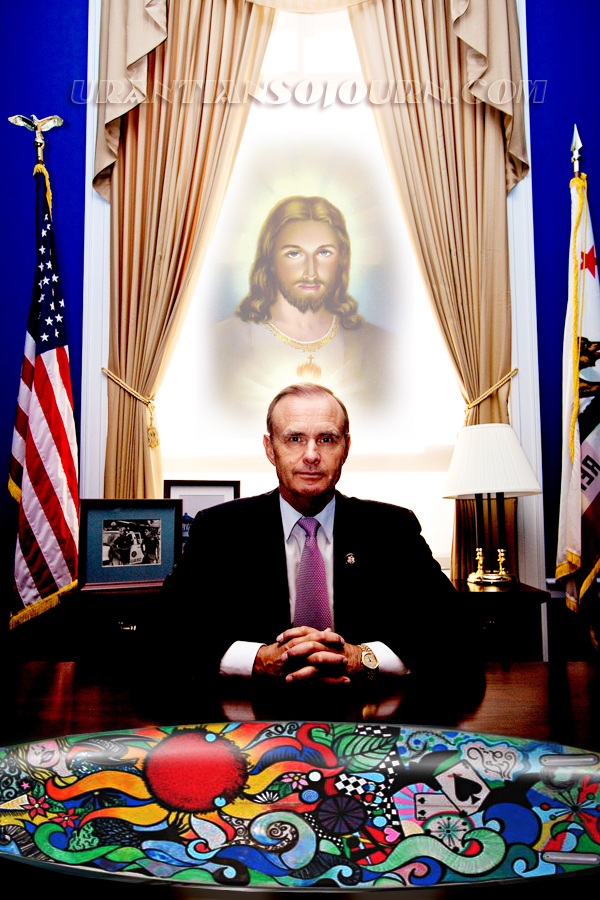 Republicans do like them some vanity cred.
This is Representative Bilbray’s California Dreamin’ portrait, complete with a hand-painted surfboard and numinous appearance of Christ.
Bitchin’, dude.  Totally go fuck yourself.

Bilbray grew up in Imperial Beach, California, and still considers himself an “avid surfer,” even after attempting, as Mayor of Imperial Beach, to build a yacht marina in the Tijuana Estuary, and a 1.5 mile long breakwater off Imperial Beach. Both projects were stopped by the efforts of local surfers, the then fledgling Surfrider Foundation, and environmentalists.

Bilbray, a tax consultant by trade, hit the political bigtime after serving out the term of a fellow Republican,  former Representative Randy “Duke” Cunningham, whom you will recall plead guilty to accepting some $2.4 million in bribes.

From May 2002 until July 2005, Bilbray was a lobbyist for the Federation for American Immigration Reform, (FAIR) a conservative anti-immigration lobbying group which was officially identified as a “hate group” in December of 2007 by the Southern Poverty Law Center.