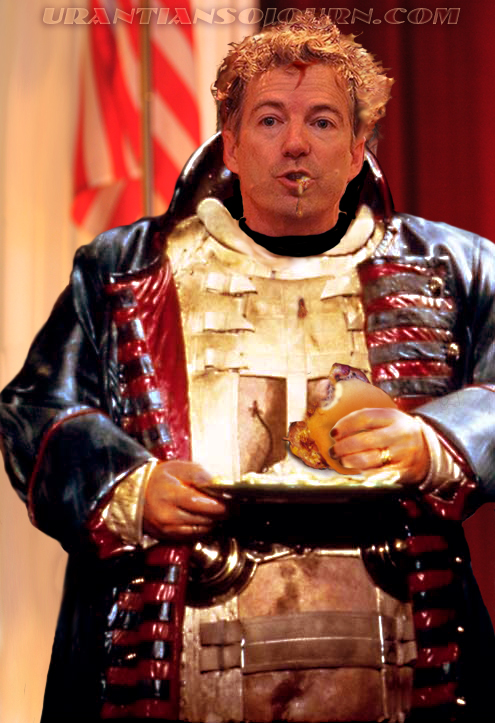 Baron Rand Paul Harkonnen, expounding on the joys of Libertarianism.

Some people are just sloppy thinkers.  They get their little macaroni fingers on a delicious but strictly philosophical entrée, and the next thing you know it’s dribbling down their chinny-chin-chin and onto their anti-gravity vestments.

Now that Baron Rand has had a taste of the ultimate power Spice— politics— we can expect to see a lot of new stains running down his front-side garments, as he tries to explain their relevance to a career of public service based on an ideology of self-motivated liberty, unmitigated selfishness, and conspiratorial nuttery.
For instance.

I’d … like to know whether [Rand] Paul really believes in a conspiracy among the U.S., Canadian and Mexican governments to turn North America into a “borderless, mass continent” bisected by a 10-lane superhighway.  Because that’s what he said in 2008.

“It’s a real thing,” he said of the imaginary threat to U.S. sovereignty, “and when you talk about it, the thing you just have to be aware of is that if you talk about it like it’s a conspiracy, they’ll paint you as a nut.”

Indeed.  Why not let Dr. Paul continue to paint himself with the remnants of his own ideological repasts?  And then the sooner we can dispatch him to the philosophical scrap-heap of history.

There are many important things to understand about liberty, and now is a good time to review some of them.

Enduring liberty is predicated on the reality of justice— intelligence, maturity, fraternity, and equity.
But liberty can also be self-destroying when its motivation is unintelligent, unconditioned, and uncontrolled.

Real liberty is nonexistent apart from cosmic reality— and all personality reality is proportional to its divinity relationships.

Unbridled self-will and unregulated self-expression equal unmitigated selfishness, the acme of ungodliness.
Self-motivated liberty is a conceptual illusion, a cruel deception. License masquerading in the garments of liberty is the forerunner of abject bondage.

True liberty is the fruit of self-control— false liberty, the assumption of self-assertion.

There is no error greater than that species of self-deception which leads intelligent beings to crave the exercise of power over other beings for the purpose of depriving these persons of their natural liberties.  The golden rule* of human fairness cries out against all such fraud, unfairness, selfishness, and unrighteousness.

As evolutionary creatures, the story of man’s ascent from seaweed to the lordship of the earth is often a romantic one.  But quite clearly, government by and for mankind has a long, long way to go before we can all share in the liberty we all crave.  We had better understand that we must continue to contend aggressively and progressively for our personal material liberties with a continuing stream of tyrants and oppressors, corporations and fools.

* “Do unto others as you would have them do unto you.”