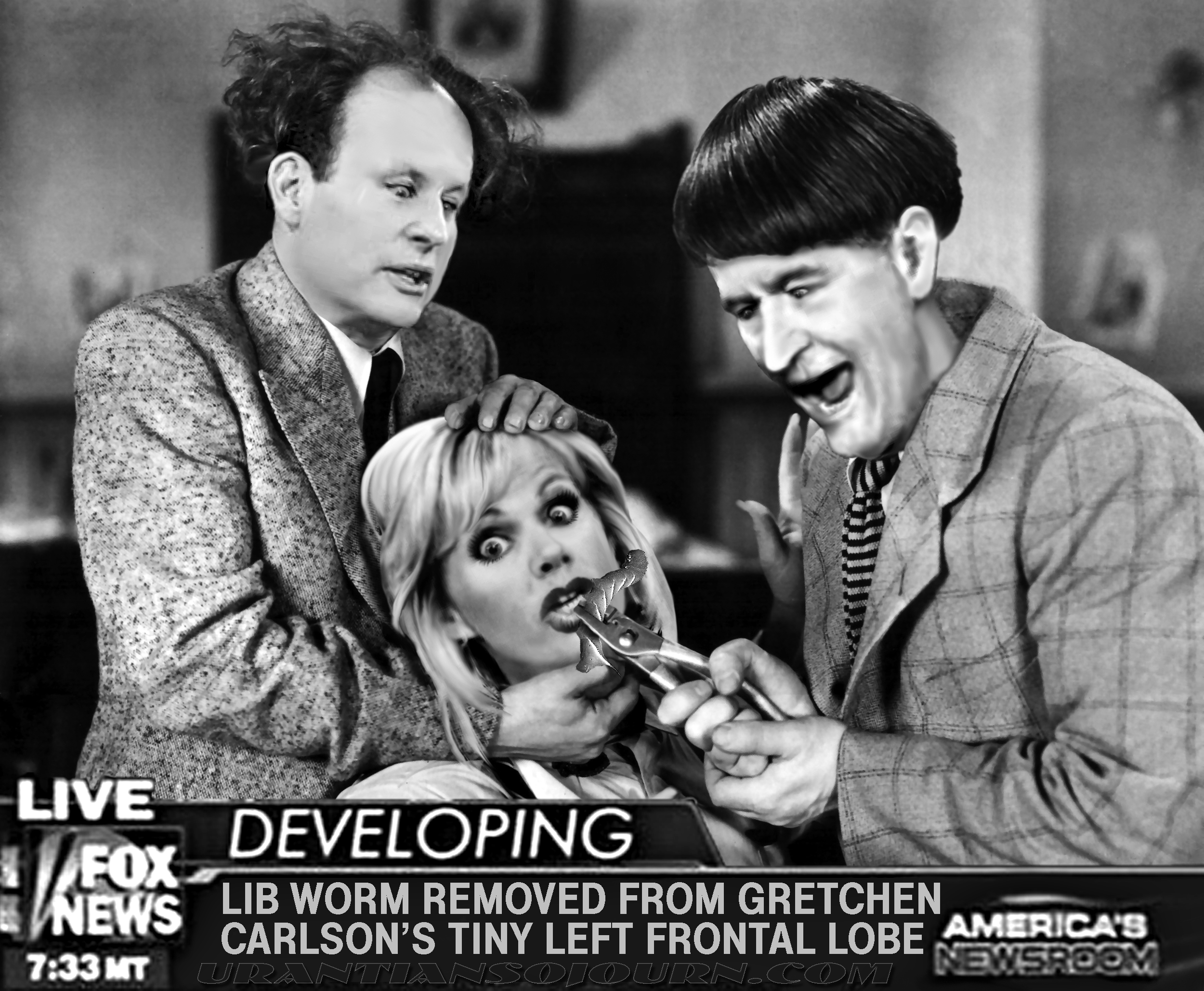 Larry Kilmeade steadies Curly Carlson while Moe Doocy extracts a vicious “Lib-Worm” from Curly’s now completely vacant cerebral cavity.
If you want to super-size the nut juice, you must click it.

Watching Fux Noize has always been an insulting and painful exercise in manipulative ignorance bordering on repulsion, and for years now I can’t even surf through the channel without it arousing antagonism.  But when Keith Olbermann forces me to watch their antics by making Gretchen You Ignorant Slut Carlson the Worst Person in the World, I start to spontaneously verp and must seek relief by lashing out.

On any given day Curly You Ignorant Slut Carlson is busy single-handedly redefining vapidity for a new generation of American maroons.  But recently it became clear that something was terribly wrong with her precious few synaptic firings, and even her jaw-droppingly clueless colleagues could tell it was time for an investigatory intervention.

Hapless Moe Doocy quickly theorized that a nefarious someone— Barack Hussein Obama— had somehow managed to shove a “Lib-Worm”— a caterpillar full of liberal nonsense— down Curly‘s throat, or into one of her nostrils, where it made it’s way into the left frontal lobe of her ping pong ball-sized cerebrum and began feeding on the last remaining vestiges of sentience. Within hours, Carlson was blathering on the air that her job was  “…just like the president’s.”

By air time the next day, the caterpillar had also spread to the little collection of mouse turds Larry Kilmeade uses for brains, and he wondered out loud why, since president Obama had been able to appoint a new general within 24 hours to conduct the Afghan War, why was it taking him so long to stop BP’s oil spill??

As the last ounces of sanity dribbled down Larry‘s chin, hair-brain Doocy realized he didn’t have a second to waste. Grabbing a pliers from a stagehand’s tool belt, he instructed Larry to hold Curly steady as he deftly pulled a throbbing, fully-charged Lib-Worm right out of her snout.

If there was any doubt left that Liberal ideas are a clear and present danger to the continuous spouting of hypocritical hyperbole that flows like effluvia from the assorted pie holes at Fux Noize, it had now been removed.  And it was also clear that an increasingly desperate Barack Insane Obama would stop at nothing less than worm warfare to destroy the vision of reality that Roger Ailes deposits in the Fux Noize Men’s Room, often sixty times or more daily.

Repent, y’all.  It smells like the end has got to be near.