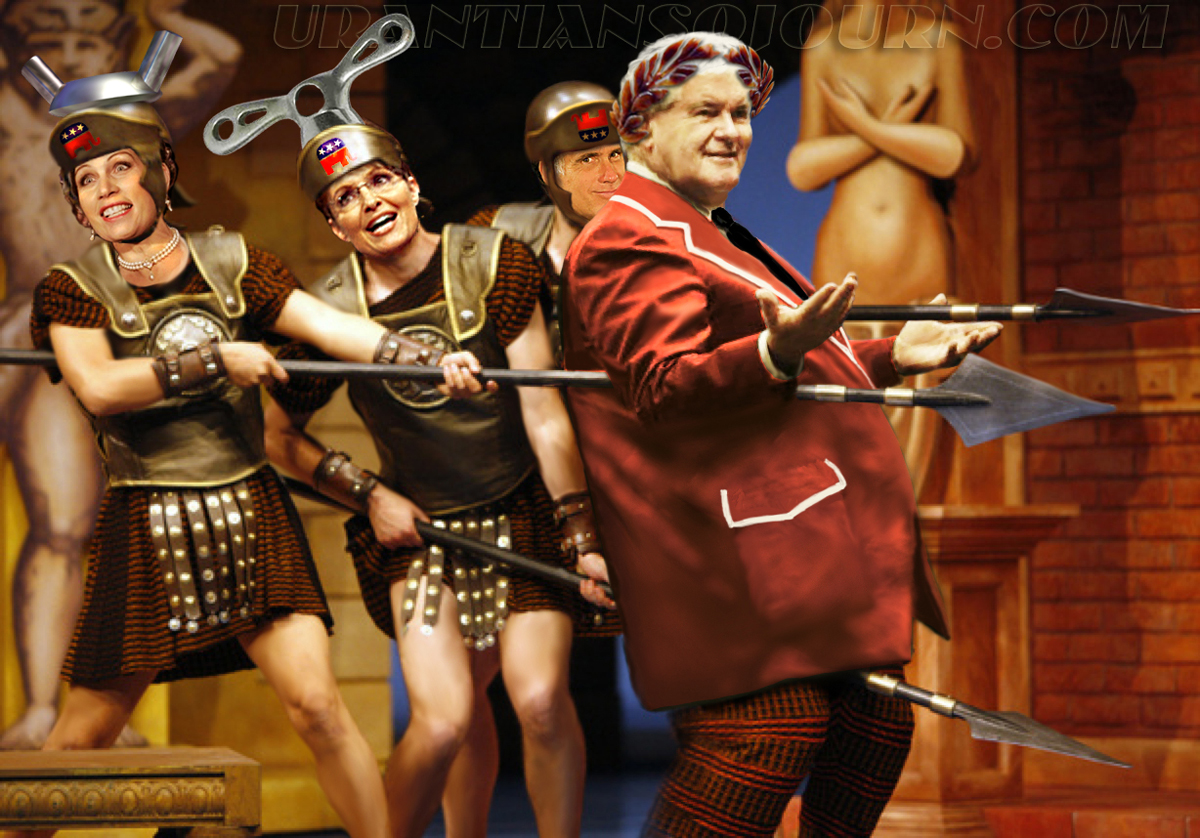 Alright, we admit it:  we don’t have a frickin’ clue what’s going on here. That won’t stop us from speculating tho:  Yes, that’s definitely Captain Kangaroo’s massive jacket hiding Newton’s corpulence.  And he’s also wearing the laurel crown of a Roman emperor, which speaks to his blind ambition. But those hideous trousers can only mean one thing: tiny penis.  As for those soldier-ish wenches, they have their spears out, but their wingnutter headgear is clearly “debasing” their aim. And that third one looks like he’s wearing majik underoos.  Maybe it’s a high school play. Maybe it’s just a few GOPPER has-been losers posturing for 2012. Only one thing we know for sure. If you wanna feel the shaft, you must click it.

M¢DONALDS —  Way too many Americans are fat.  And getting fatter by the day and hour.  Remember when it was the common mythology to say that fat people had a “gland problem”?  Well most of them, to use a favorite conservative saw,  just ram too many calories down their throats.

Disgraced and resigned politician Newt Gingrich is one of those people.  To be sure, there are a lot of fat-cat politicians, on both sides of the political aisle.  And you can safely bet most of them aren’t able to think any better than they actually eat.  Newton Leroy Gingrich is a great example of what I mean.

If you entertain the slightest notion Gingrich is qualified to be president of the United States of America, take the time to read Esquire’s interview of Gingrich’s second wife, Marianne. She was interviewed after twelves years of silence on Newton’s behavior during their eighteen year marriage.  We’ve recently pointed out Newton’s life as a serial adulterer, but now we’re getting a picture of Gingrich’s repulsive political rapaciousness from someone who actually slept with him, as well as others who have worked with him.

He took to taking meetings while eating, slurping his food, as if he wasn’t aware or didn’t care how strange it looked. The staff responded with gallows humor: “He’s a sociopath, but he’s our sociopath.”
— Marianne Gingrich

He was just full of hate and venom.  He was driven mainly by trying to tear down the leadership and gain political power.
—Beryl Anthony Jr.,  past Democratic Congressman

You know what he hated most?  When they talked about him being fat.
That weight thing was personal.
— Marianne Gingrich

I’ve known Newt now for thirty years almost.  But I wouldn’t be able to describe what his real principles are.  I never felt that he had any sort of a real compass about what he believed except for the pursuit of power.
— Former Republican Congressman Mickey Edwards

As his personal failures and his political contradictions closed in on him, she began to entertain fears about his fundamental decency. “I used to tell him I don’t care if you lose Congress as long as you’re standing for what you believe in and what we’ve worked for — as long as you don’t sell out,” she says. “But he wanted the life he wanted. You can call it opulent. You can call it self-indulgent. You can call it anything you want to. But that’s not me.”
—John H. Richardson with Marianne Gingrich

The religious emphasis of his documentaries underscores his recent conversion to Catholicism, and perhaps helps to dim the memory of his ugly divorces.  When asked about his conversion, Marianne laughs.
[John Richardson]: Why is that funny? [Marianne Gingrich]:  “It has no meaning.”
—John H. Richardson with Marianne Gingrich

If you can pony up $2.16, you can get a used copy of Newton‘s 2006, Rediscovering God In America, wherein he makes a disgusting attempt to blame President Obama for the lack of direct references to God on recent public monuments.  But you will not find any insight into Newton‘s understanding of what it means to have a personal religious commitment to spiritual values, like truth, beauty, or goodness.

She’ll tell you quite candidly that Newton Leroy Gingrich has sold his soul.  She doesn’t bother to say to whom.
The trouble is, Newton doesn’t give a shit about his soul, or yours, or mine.  He wants to be president, and as your president he’ll scratch and claw the eyes out of anyone who fucks up his chances of getting to the oval office, and that includes his multiple spouses as well as what remains of the little people middle class.

If the Dick-Bush years taught us— that’s you and me— anything about our elected leaders, it’s that our beloved nation may not be able to absorb another egomaniacal fat-ass (Dickers) who spends his life divorced from reality. Sure, Newton will tell you with great conviction that President Obama is the greatest threat to our country. But for my money— what little there is of it— it’s Newton Leroy Gingrich.