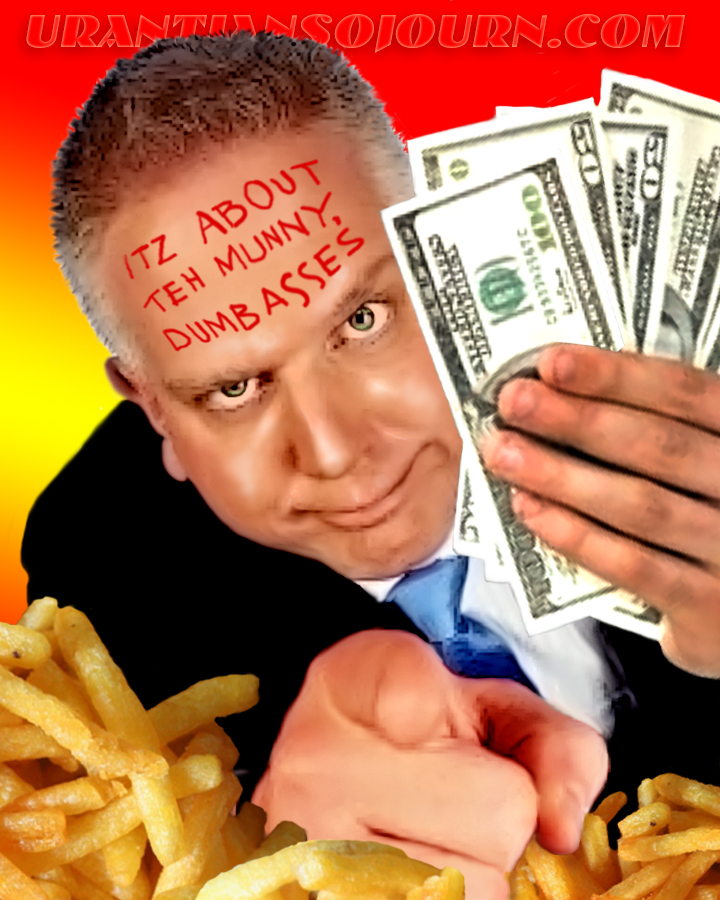 Pudge Muffin Beck says the fat should just die already. Hey— he told you he was a clown. If you wanna smell the french fries, you must click it.

Since First Lady Michelle Obama unveiled her Let’s Move! program to fight obesity, a cackle of fat cat conservatives have attacked her efforts as just another Obama assault on the personal freedoms and liberties of french fry-loving, overweight Americans.

Gross Stupidity’s straight man, Sean Hannity, whined about an “Obama government obesity task force,” rhetorically editorializing, “Does every American family need a dietitian appointed by the government to tell them that this food is going to make you fat, and this food is not?”  Well no, Sean, not every American;  just the estimated 32.7% of U.S. adults 20 years and older who are overweight, the 34.3% who are obese, and 5.9% are extremely obese. So, you know, just the 72.9% of us… and well, this child:

Not to be outdone by ‘lil chub Hannity, hate blogger Michelle Malkin said that her problem with the Obama administration is that it’s “… more concerned with policing grocery aisles and our refrigerators than it is with our borders. . . we’d be heck a lot better off if they got their priorities in order.”  That’s right.  To Malkin, putting America’s obese children— growing little citizens that they are— ahead of issues with Mexico’s job-hungry poor, is genuinely anti-American.  But our unthinking and often obese tea baggers swallow her nonsense in one big slurpy gulp.

You see, a hateful bitch like Malkin doesn’t care that a peculiar type of government “policing” that has long subsidized our nation’s corn, soy bean, and wheat crops, creating such an over-abundance of them that derivative products like high fructose corn syrup, (read: sugar), soy, and wheat flour finds its way into practically all refined foods found in America’s freedom-grocery isles;  and three-fourths of our fat population not only gets fatter and fatter because they’re not smart enough to eat right, but they— and their children— are getting diagnosed with adult-onset (type 2) diabetes and, just  like Uncle “restoring honor” Beck wishes, they’re dying in record numbers.*

Only former fat guy Mike Huckabee had enough sense to suggest conservatives not mischaracterize the report.  In February of this year Huckabee said that the initiative is not a “nanny-state solution” or even a “leftist position”;  he worried, of course, that conservatives would thoughtlessly attack the program—  like they do everything else.  Showing an unusual sense of proportion for a guy who is still shoving too much food down his own throat, Mike said Michelle Obama “…does not believe that it is a government solution and that government should dictate what size cheeseburger you eat.”

This is torn from the pages of the progressive playbook.
You’re too stupid. You need the government to fix your life,
and they agree with you that government has no place in this business.
But we’re just going to help make things better.
—Glenn Beck

Yesterday,  Glenn Beck helped himself to a generous portion of hypocrisy by swallowing the crap too, criticizing the First Lady for encouraging restaurants to “offer healthier versions of the foods that we all love.” Then he dished up a jumbo dollop of side-splitting humor, saying that fat people should, well,  just die:

BECK: When I heard this I thought, get your damn hands off my fries, lady. If I wanna be a fat fat fatty and shovel French Fries all day long, that is my choice.  But Hoh hoh hoh!  Not so fast anymore.   Because now we have the new fact, whether you like it or not, we have government health care now. … Because the nation’s health care costs are directly tied to the government, and obesity is one of, if not the most costly conditions, costing you and me now, at least 150 Billion dollars a year.**

Glenn’s a little off;  but then you knew that. The actual cost to you and me, and even Beck, is 215 Billion annually.

Ya know those fat people that sit in [sic] their couch?  And I mean really fat— I mean, (gestures to his gut) not like me.  I mean the people who like, their skin grows into the couch— and then, you know, they call the fire department and they cut’m out of the wall, [sic] and then they havta bring in a truck, and then they take’m to the hospital…

I say let them die.  I say punish the person who’s been bringing them the milk shakes that allowed them to eat and not get up off the couch.  Am I too harsh?

Yes;  you’re too harsh, “punishing” people who deliver “milkshakes for a living;  and you’re too stupid, just like Hannity and Malkin;  because all of you don’t fucking understand that the fire department  and the truck, and the wall cutting, etc., and especially their stay for treatment in the hospital is paid for by ALL OF US, even the one’s who can’t afford their own health care. 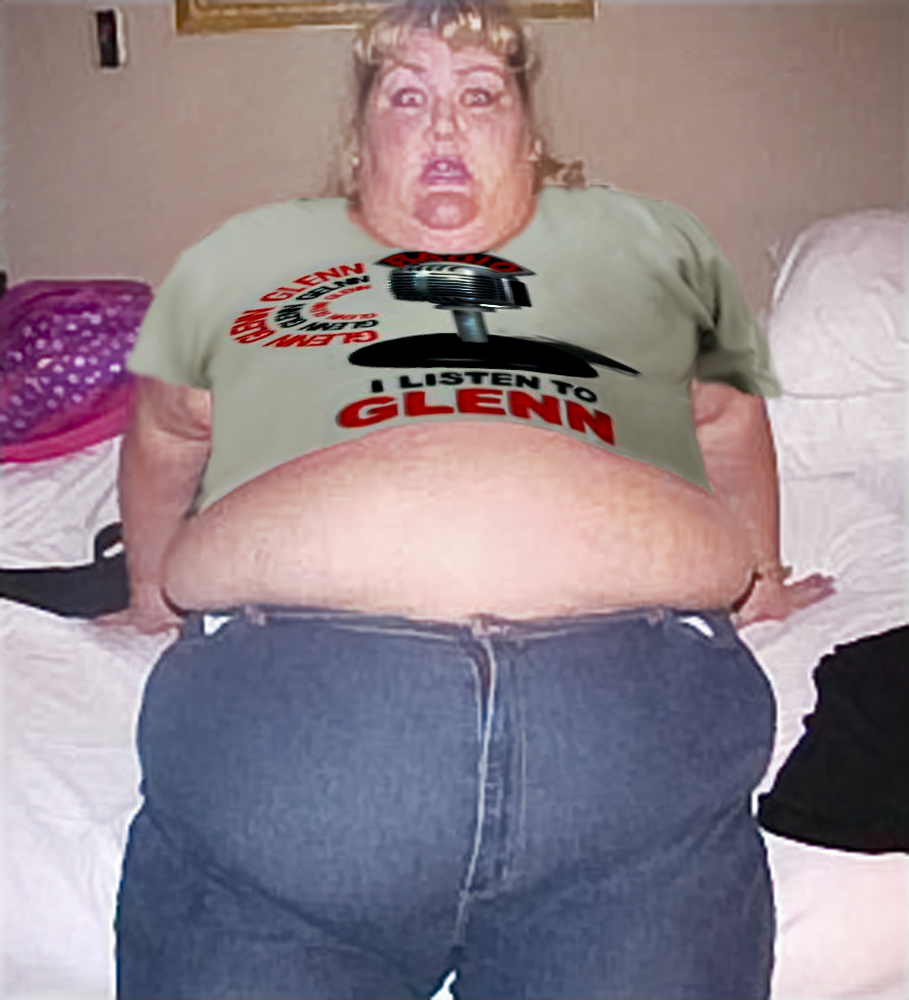 Becky Sizemore (not her real name, dumb asses) used to be really proud of her gigantic muffin-top;  now she feels betrayed by Glenn Beck, who wants people like her to just die.  Well.  That was the Republican Health Care Plan from the start:  “Die Quickly.”

BECK’s NOT DONE: You can make the argument now that government has a vested interest in intervening and keeping the costs low;  have too;  it’s for the “good” (puts his hand over his “heart”) of all of us.  But they know that coming out and banning things like french fries— not really gonna go over well;  yeah. . . Have progressives ever done that before? Ho ! Yes! Thank you for asking..

Well, that’s too big a portion of nutball stew for any sane person.

So yeah, Beck admits he’s fat;  that he’s one of the very people the program is designed to help, except he has enough money he doesn’t have to worry about not being able to afford healthy food.  Those of you who can’t help yourself due to lack of education or money, well, Beck knows that  you, like seven year old, 400 lb. Jessica, can never willingly stop eating french fries.  He knows you’re too weak to get through the valley of darkness by yourselves; and he doesn’t give a fuck.  He’s not “his brother’s keeper.”  And he doesn’t give a shit about any lost children.  But then, he’s told you that all along.

Blessed is he, who in the name of charity and good will,
shepherds the weak through the valley of darkness,
for he is truly his brother’s keeper and the finder of lost children.
—Ezekiel 25