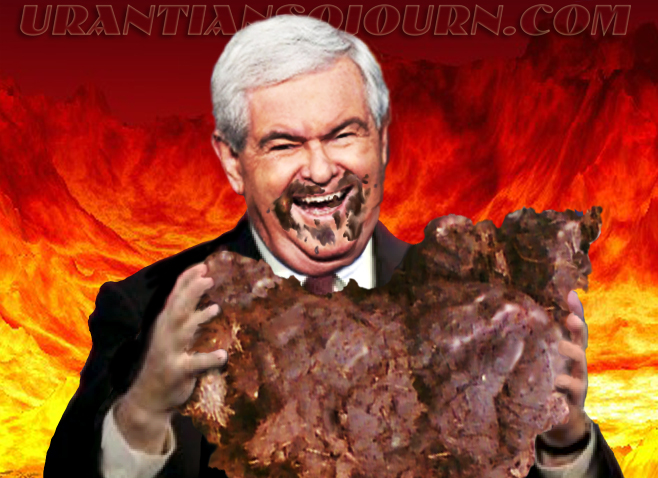 Among the other blatant pellets of solipsistic effluvium on his website, Newton Leroy Gingrich proclaims that “there should be no mosque near ground zero in New York so long as there are no churches or synagogues in Saudi Arabia.”

Gingrich’s choice to spotlight the radical fundamentalist regime of Saudi Arabia (hypocritically supported by Gingrich himself when he was Speaker of the House in the 1990s) – while neglecting moderate and secular governments in the Muslim world, speaks volumes about what he considers to be the “essence” of Islam.  Gingrich’s language is truly abhorrent;  he frames those supporting the community center in Manhattan as part of the same “they” as the Islamic fundamentalists who perpetrated the 9-11 attacks.  As far as Gingrich is concerned, there are no distinctions to be made in the monolithic “threat” that is the entire U.S. and world Muslim community.

That’s only the beginning of the disingenuousness that tumbles out of Gingrich like elephant dung.  Who genuinely believes an over-educated politician and self-absorbed seeker of the presidency of the United States would suggest that a restrictive totalitarian government like Saudi Arabia must demonstrate the true scope of the fruits of a free society— before Americans should demonstrate it themselves??

Perhaps this sort of tea-bag brain, protest sign philosophy passes the dunce test for racist morons, but why would any educated American who can think for themselves believe such an unabashed betrayal of American principles?