It’s been a tough couple weeks in the world.

Number 6 of 6 puppies is about to get a first taste of the river of life and death.

Yeah. That last one.  Dog babies, maybe a couple weeks old, heartlessly tossed into a swift current.  Yes, I know thousands of human beings have been drowned in Pakistan, many more starving, contracting disease, with more than 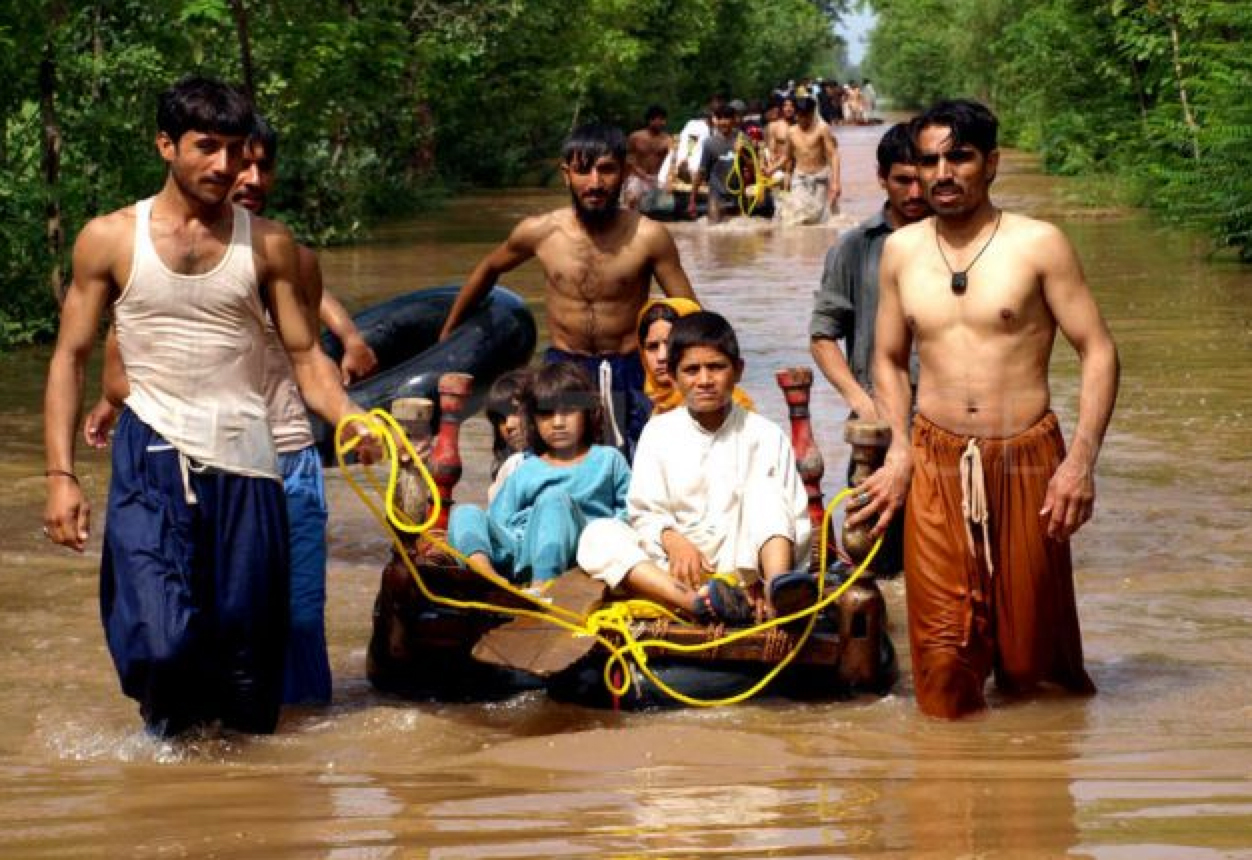 twenty million homeless and little hope of surviving very much more climate catastrophe;  heart-wrenching beyond belief.  But it was Mother Nature who threw these millions of Muslims— and Christians— into the current.  And we all know what a heartless biotch she can be.

Some Christians might think their version of an all-loving and all-merciful divine being is calling all these Muslims home to Paradise to punish them— for not being smart enough to become a Christian when they had the chance— and therefore avoid eternal damnation in a fiery pit off in the heavens somewhere, there to spend an eternity being tortured in flames.  But sadly, all those people drowned before converting to Christianity, and must now spend eternity in hell as their infallible idea of an all-merciful Father of Love commands.  Yeah, that is so 1st century BCE.¹, but it’s all they’ve got.

Neither does it help rouse their sense of human decency that these particular Muslims are the only ones who happen to have their own nuclear weapons arsenal.  Oh— that, and they owe us 40 Billion dollars.  Even so, the Catholic Bishops of Muslim Pakistan—  yes, there are Christian Pakistanis— have called out to the Christian world community to stand united with them during this ongoing climate calamity.  Still.

Jon Soltz
Think terrorists can’t pretend to be nice people when it suits them? Look no further than the Palestinian territories, where for years, Hamas has taken care of many social services, and provided for the families of suicide bombers and other terrorists. The result? Hamas won open elections in the territories, and now controls Gaza.

So, yes, that’s happening right there in Pakistan. Reports CNN, “An official with Falah-e-Insaniyat, a group widely believed to be the charity wing of a Pakistani terrorist group, said Shah, the USAID administrator, visited a camp the group was running. Kuaateeb Ullah, Falah-e-Insaniyat’s leader in Sukkur, said the charity is running five camps in the Sindhi city and providing food and medicine to 3,500 flood survivors. He told CNN that Jumaat Ud Dawa, banned by the United Nations and the Pakistani government as a terrorist organization, was helping fund the relief missions.”

The “charity wing”?  Pretending “to be nice when it suits them”?  Perhaps. But do you really think that Jesus cares a lot that their willingness to serve their countrymen is so they can call in a few “chits”² later, when they seize power over these same people?  Do American Christians remember that Jesus said, “I tell you that, even when a cup of cold water is given to a thirsty soul, the Father’s messengers shall ever make record of such a service of love.”

Not a good development in a country where the US is already seen as the enemy by every 6 out of 10 people.

Hmm;  how did that happen?  Ask yourself:  How much “collateral damage” inflicted on your friends and family by another nation’s armed forces would it take to turn you into a “terrorist”?

Issam Ahmed
At a medical camp on Muzaffargarh’s main road, Dr. Ghulam Mustafa, chief of the Falah-e-Insaniat medical team, sits with several helpers and dispenses drugs. In between prescribing diarrhea medication to a small infant who has been brought along by his mother, Dr. Mustafa explains: “Only we and the Jamaat-e-Islami have camps in the villages and far flung areas. It is our Islamic duty” to help, he said. In a text message to the Monitor, the Al Khidmet foundation makes similar boasts about its efforts in Layyah, Sindh. “In one area we have 10 boats busy rescuing those affected. Here there are no Army or civilian government representatives.”

It is their “Islamic duty” to help, they “boast,” as they are the only ones with “camps in the villages and far flung areas.”  Yeah that sounds dastardly.

But let’s move on.  Mass rapes in the Congo.  That’s ugly beyond belief.  Yet, as the headline says, it “can’t be stopped.”  Why?  Nearly 200 women and four baby boys were raped over four days— within miles of a U.N. “Peacekeepers‘ “base.  But nothing could be done, supposedly, because according to a government spokesman, the “Congo’s army needs more on-the-ground support for its security forces from the international community.”  U.N. support for the army is limited to transport, food, fuel and medical evacuations;  the fate of women and children is someone else’s job, because the “United Nations” doesn’t have the moral authority to “interfere.”

Moving down the list, the next half dozen headlines deal with America’s two current wars— the one President Obama officially declared over for our combat troops— and the one where we’ve still got some of our children’s skin in the game.  I say “game,” because President Obama, moderate Christian that he is, has not yet taken to heart the moral imperatives in Christ’s straight-forward teaching, “Love your enemies.”  He’s still playing the game of national sovereignty, pretending that we are independently free to pursue America’s interests in the world, without recognizing the necessary step of forging a confederation of nations avowed to keep peace in the world;  to jointly share the responsibilities that entails in blood and money from all nations, not just ours.

It’s the job of all nations who seek peace;  not just the U.S. and a few of her allies, all of whom have their own international agendas.  Only when a strong majority of peace-loving nations pool their limited resources and military forces will “the world” be able to afford to genuinely ensure global peace and prosperity for all.

Intractable international problems continually and increasingly reveal how ineffective— and unethical— it is for any single nation, like the United States, to assume the mantle of “World Sheriff,” spending money we don’t have (read: we’re effing broke) to protect or control other nations like Iraq and Afghanistan, from the tyranny and terror of its own people.  World security and internal national peace must become the shared responsibility of ALL nations on earth;  all those nations who have finally learned that war is ruinous for all nations— not just the nations backward enough to believe they can solve problems by murdering one other— but also for those who set their highest morals and ethics aside and look the other way until the damage is done.

Yes, the world is a dangerous place, bla bla, bla.  But when will the leader of any nation on this planet finally get it right: WAR IS FOR IDIOTS, and must be stopped.  MUST. BE. STOPPED.
But as long as there are those who would make war— whether individuals, backward tribal groups, militias, or nations— they must come to face the full and immediate moral, legal, military force of all other nations united, who have the right to decide these issues democratically, as a world governing body, once they have agreed to make that governing body sovereign;  the same way our individual states respect our federal government’s authority.  Until then, we can look forward to the increasingly grotesque failure of our nations to act wisely and effectively to solve our shared-world problems.  And we will not enjoy lasting peace until the so-called sovereign nations intelligently and fully surrender their sovereign powers into the hands of the brotherhood of men— mankind government.

²  “Chits”—  common military slang for a certificate with monetary value