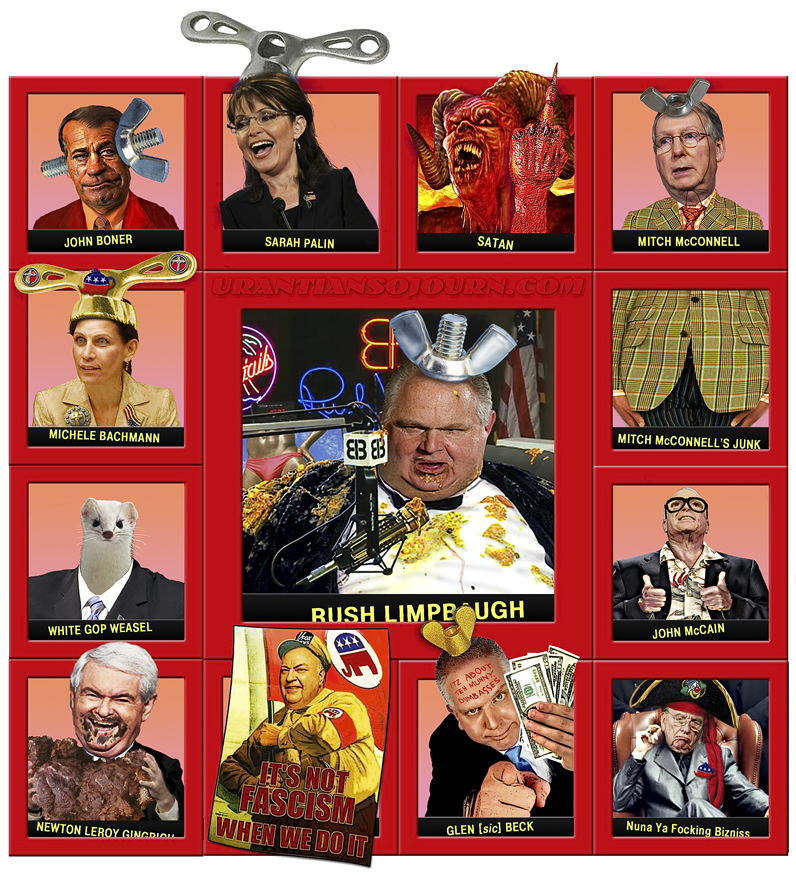 GOP Participants in the most popular D.C. gameshow, Washington Squires

The fumigation tent had hardly been removed from the White House following the much ballyhooed bipartisan Slurpee Summit when Senate Minority Leader Mitch McConnell reverted to type. As TPM reports it:

DADT No More? Republicans Threaten To Block All Dem Initiatives

Just hours after Democrats and Republicans agreed to bargain on tax cuts, and fewer hours still after Defense Secretary Robert Gates implored Congress to repeal Don’t Ask, Don’t Tell this year, word leaked that Republicans aren’t really interested in any of it — a major repudiation of Gates’ authority.

According to a letter delivered to Senate Majority Leader Harry Reid this morning, Republicans will block all debate on all legislation until the tax cut impasse is bridged and the federal government has been fully funded — even if it means days tick by and the Senate misses its opportunity to pass DADT, an extension of unemployment insurance, and other Dem items.

“[W]e write to inform you that we will not agree to invoke cloture on the motion to proceed to any legislative item until the Senate has acted to fund the government and we have prevented the tax increase that is currently awaiting all American taxpayers,” the letter reads. “With little time left in this Congressional session, legislative scheduling should be focused on these critical priorities. While there are other items that might ultimately be worthy of the Senate’s attention, we cannot agree to prioritize any matters above the critical issues of funding the government and preventing a job-killing tax hike.”

It was penned by Senate Minority Leader Mitch McConnell, and signed by all 42 Republicans.

According to the AP, which first broke the news of the letter, and portrayed it as a GOP effort to block all Dem initiatives unilaterally, the START treaty would be exempted. But everything else — particularly DADT, unemployment insurance and the DREAM Act would be ensnared…

Like this should come as a surprise on the heels of McConnell’s promise to put President Obama’s defeat in 2012 over everything else, the dire needs of the American people notwithstanding. Continue the tax cuts for our  filthy rich supporters or we’ll burn your house down! You don’t want to see another 2 million unemployed hit the soup lines for the holidays?  Pass the fucking tax cuts! Or we might decide to cut the deficit by taxing the hell out of soup. 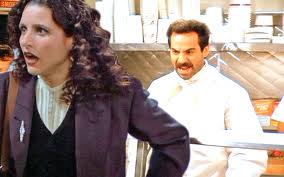 No soup for you! Rethugs threaten to send in The Soup Nazi

No pain is too great for destitute Americans to suffer as long as the super rich get even more money to help create cheap jobs overseas.

In all this McConnell has the unanimous support of all his fellow Rethug senators and the entire right wing political establishment, courtiers to the rich and powerful. They all seem to think this is some kind of game,  with bonus points awarded for depriving the government of another $700 billion in discretionary money that funds programs that directly stimulate the economy. Unemployment insurance, student loans, food stamps– all are force multipliers  that ripple  throughout the economy. Tax cuts for the rich are the least effective form of stimulation, as any legitimate economist will tell you.

Don’t trickle down on me and say it’s raining.

Meanwhile, a headline at USA Today blares: Luxury Spending Back in Fashion. High end retailers are doing gangbuster business while ordinary Americans have to weigh every cent carefully before making a purchase. US corporations just finished their most profitable quarter in history and are sitting on $2 trillion in cash. And Wall Street is about to disburse some $144 billion in end of the year bonuses, which would have been impossible without the American taxpayer bailing them out in the first place.

The Democratic president offers nothing but compromise while the Rethugs offer nothing but ultimatums. (Guess who my money’s on.) The normally supportive E.J. Dionne pens a column today in WAPO titled:

…Is President Obama’s strategy of offering preemptive concessions destined to make enemies of his potential friends in the electorate without winning over any of his adversaries? …

Worse, every signal out of the White House is that it is prepared to cave to Republican demands for a temporary extension of all the Bush tax cuts, including those for millionaires who are in rather less need of additional income than security workers at Logan or nurses at government hospitals …

What we are witnessing here is the political power that comes from the Republican Party’s single-minded focus on high-end tax cuts and the strategic incoherence of a Democratic Party that is confused and divided – and not getting much help from its president.

Obama seems to have decided that showing how conciliatory he can be is more important than making clear where he stands. The administration’s strategy is rooted in a fear of what Republicans are willing to do, which only strengthens the GOP’s bargaining position …

The best gloss on all this is that the president is engaged in a holding action aimed at getting out of this lame-duck period with something to show for his efforts and a chance to regroup. But he will soon have to decide whether he wants to be a negotiator or a leader. You have to hope at least that he doesn’t want to spend the rest of his term issuing apologies to Mitch McConnell and John Boehner …

He’s right to fight for a restoration of unemployment compensation for about 2 million Americans whose benefits have expired, and for other stimulative measures. And, yes, the Senate should ratify the New START treaty with Russia before the end of the year – though what does it say about us as a country when the president has to offer a tax-cut payoff to get a key foreign policy initiative through?

The Rethug 2010 political strategy was simple enough: Obstruct and delay any Democratic legislative proposals and then blame the Dems for not getting anything done. The 2012 strategy raises the ante to include outright blackmail.

Obama is in danger of losing the part of his progressive base that hasn’t already bailed. Having lost independents this year (in large measure due to a horrible messaging campaign) he’s about to go down in history as the most  popular one term moderate Republican president in history. If he wants another term, he better stop bending over every time the Rethugs say boo. Voters may not always be well informed on the issues, but they can sense weakness, like a horse  throws an uncertain rider.