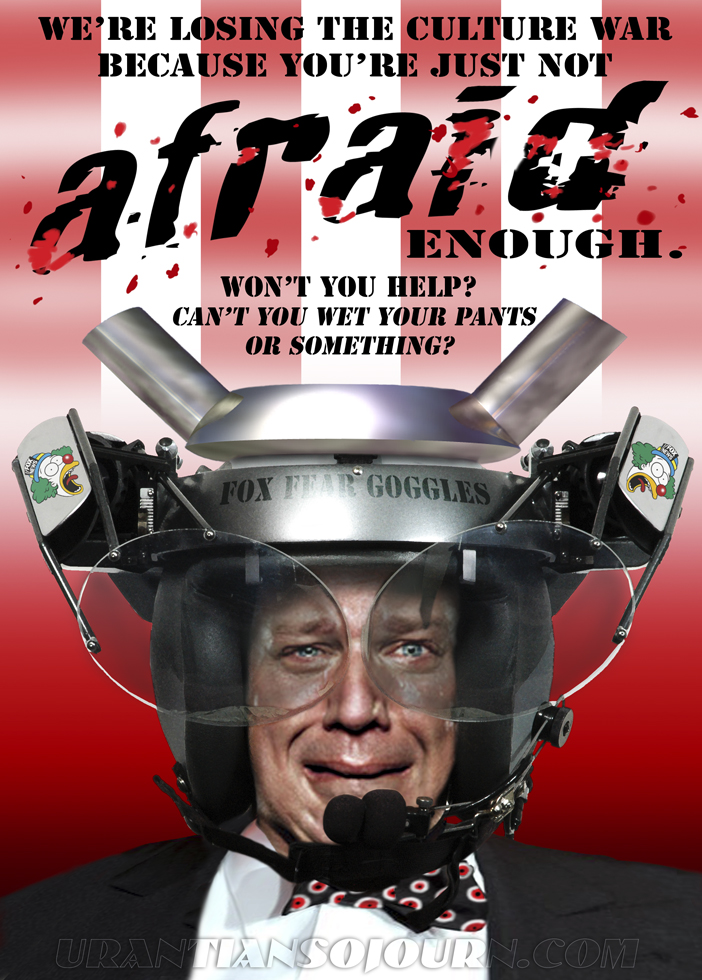 Solange Uwimana over at Media Matters draws our attention to an interesting conjunction between Glenn Beck and the late Richard Hofstadter :

The year Glenn Beck was born, Harper’s published an essay by Richard Hofstadter in which the historian explained a “style of mind” common among “extreme right-wingers” of his time. He referred to it as “the paranoid style” for it adequately described this small minority’s “sense of heated exaggeration, suspiciousness, and conspiratorial fantasy.” Today, it’s become increasingly clear that no other conservative personifies Hofstadter’s “paranoid spokesman” for the 21st century more than Fox News’ Beck.

Wrote Hofstadter in his 1964 essay:

The paranoid spokesman sees the fate of conspiracy in apocalyptic terms — he traffics in the birth and death of whole worlds, whole political orders, whole systems of human values. He is always manning the barricades of civilization. He constantly lives at a turning point. Like religious millennialists he expresses the anxiety of those who are living through the last days and he is sometimes disposed to set a date fort the apocalypse. (“Time is running out,” said [Robert H.] Welch in 1951. “Evidence is piling up on many sides and from many sources that October 1952 is the fatal month when Stalin will attack.”)

As a member of the avant-garde who is capable of perceiving the conspiracy before it is fully obvious to an as yet unaroused public, the paranoid is a militant leader. He does not see social conflict as something to be mediated and compromised, in the manner of the working politician. Since what is at stake is always a conflict between absolute good and absolute evil, what is necessary is not compromise but the will to fight things out to a finish.

The essay was, of course, titled The Paranoid Style in American Politics. The Wiki entry describes it

…as an historical essay tracing the influence of conspiracy theory and “movements of suspicious discontent” through the course of American history.[1] The essay has long been used by liberals to attack conservatives for responding to personal inner psychological fears rather than genuine national needs.[2][3]

No need to alter that particular prescription. Drawing a parallel between Hofstadter and Beck, Solange continues:

As Simon Maloy noted in December 2009, “Beck’s America is one that is beset on all sides and constantly on the verge of collapse.” Indeed, for the past few years, Beck has perennially warned of an “Archduke Ferdinand moment,” as well as an imminent “perfect storm,” which he claims will be an “attack unlike anything ever before from multiple fronts.” On his February 25 show, for example, Beck stated: “The rain has begun to fall in the perfect storm. It has begun.”

During the same show, Beck announced:

BECK: We’re at a tipping point. We’ve seen protests in Wisconsin spread from state to state. Van Jones has called on the, quote, “powers that be” in both parties to come together in solidarity with the workers in Wisconsin. He says organized workers, business leaders, veterans, students, youths, faith leaders, civil rights fighters, women’s rights champions, immigrant rights defenders, LGBTQ stalwarts, environmentalists, academics, artists, celebrities, community activists, elected officials, and more — he says they all need to come together and stand up for what is right. He goes on to say, quoting, “This is our tea party movement in a positive sense.”

America, we are living in a country that I said, two years ago, before the election of Barack Obama, I said there is gonna come a time when you wake up in America and you won’t recognize it anymore.

She then proceeds to document the number of times that Beck has used the term “tipping point” over the years, beginning with July 2007. I can’t think of a better metaphor to attach to the man, as it describes the projection of his inner psyche onto the world at large. In fact, I wrote about this very phenomenon three years ago, using George W. Bush as the subject, in a post titled Forbidden Planet: Meditations on the Exfoliation of Bush’s Id. In your mind’s eye, simply replace one  malignant narcissist, W, with another, the Beckster:

IN THE FUTURE, presidential candidates should be required to file psycho-environmental impact statements on the potential harm their damaged psyches can inflict upon the rest of us.

In W.J. Stuart’s classic si-fi novel Forbidden Planet (loosely based on Shakespeare’s The Tempest and later a 1956 movie), a rescue mission is sent to find out what happened to the crew of the spaceship Bellopheron, lost 20 years earlier after landing on the planet Altair-4. The rescuers, led by Commander Adams (Leslie Nielsen) discover that there are two survivors, Dr. Morbius (Walter Pidgeon) and his sexy young daughter (Anne Francis). Morbius’ warns them to stay off planet, claiming that the rest of his crew had been destroyed by a malevolent, alien force that is still at large.

They land anyway and conflict ensues. Soon, a semi-visible monster starts wrecking things and killing members of Adam’s crew. After one of the crew hooks himself up to the IQ Doubler (a Biblical metaphor for the tree of knowledge, of good and evil), it becomes evident that the Beast is really a psychic projection of Dr. Morbius’ evil id, brought to telekinetic life by the alien gizmo, called “the plastic educator…”

A half century later, the “plastic educator” finds it modern equivalent in the 24 hour GOP propaganda channel known as Fux News. Dr. Mobius is replaced by his understudy, Glenn Beck.

Also published in 1964 was Marshall McLuhan’s seminal Understanding Media: The Extensions of Man, from which we derive the dictum “The medium is the message“, underscored by this memorable metaphor: The content of a medium is like the juicy piece of meat carried by the burglar to distract the watchdog of the mind.

McLuhan issued a prescient warning about the ability of modern mass media to overwhelm the conscious mind by effecting the brain subliminally, at the level of the unconscious. From the WikiP entry:

McLuhan says that the conventional pronouncements fail in studying media because they pay attention to and focus on the content, which blinds them to see its actual character, the psychic and social effects…

Each media “adds itself on to what we already are”, realizing “amputations and extensions” to our senses and bodies, shaping them in a new technical form. As appealing as this remaking of ourselves may seem, it really puts us in a “narcissistic hypnosis” that prevents us from seeing the real nature of the media.[5]

The only possible way to discern the real “principles and lines of force” of a media (or structure), is to stand aside from it and be detached from it. This is necessary to avoid the powerful ability of any medium to put the unwary into a “subliminal state of Narcissus trance,” imposing “its own assumptions, bias, and values” on him…

McLuhan argues that media are languages, with their own structures and systems of grammar, and that they can be studied as such. He believed that media have effects in that they continually shape and re-shape the ways in which individuals, societies, and cultures perceive and understand the world. In his view, the purpose of media studies is to make visible what is invisible: the effects of media technologies themselves, rather than simply the messages they convey. ..

That same year of ’64 the saw the publication of  The Technological Society by Jacques Ellul. Ellul was a French philosopher, historian, and self-described “Christian anarchist.”  He authored 58 books and over a thousand articles. The Technological Society is considered his premier work. That McLuhan was familiar with his writings is evidenced by his review of Ellul’s classic book Propaganda: The Formation of Men’s Attitudes (from whence I derived by screen name, Propagandee). Published originally in French in 1962, it was published in English in 1965 (and still in print), thanks to the efforts of one Aldous Huxley.

From WikiP’s entry on Jacques Ellu:

…Ellul claims that “it is a fact that excessive data do not enlighten the reader or the listener; they drown him. He cannot remember them all, or coordinate them, or understand them; if he does not want to risk losing his mind, he will merely draw a general picture from them. And the more facts supplied, the more simplistic the image”.[24] In addition, people become “caught in a web of facts they have been given. They cannot even form a choice or a judgment in other areas or on other subjects.

Thus the mechanisms of modern information induce a sort of hypnosis in the individual, who cannot get out of the field that has been laid out for him by the information”.[25]) “It is not true that he can choose freely with regard to what is presented to him as the truth. And because rational propaganda thus creates an irrational situation, it remains, above all, propaganda – that is, an inner control over the individual by a social force, which means that it deprives him of himself”.[26]

Ellul agreed with Jules Monnerot who stated that “All individual passion leads to the suppression of all critical judgment with regard to the object of that passion”.[27]

The individual who burns with desire for action but does not know what to do is a common type in our society. He wants to act for the sake of justice, peace, progress, but does not know how. If propaganda can show him this ‘how’ then it has won the game; action will surely follow”.[28]

Understanding the paranoid stylings of Glenn Beck can thus be gleamed  from the mid-Sixties era in which he was born, as previewed in the writings of Ellul, Hofstader, and McLuhan.  Beck, via his collaboration with Rupert Murdoch and Roger Ailes at Fox News, merely finds himself in the right place at the right time.

(News note:  Murdoch’s  ploy to buy out the part of BSkyB that he doesn’t already own was just approved by Culture Secretary Jeremy Hunt. Pending final approval, that, would make Murdoch’s media reach the most expansive in Britain, exceeding even that of the BBC, whose budget is simultaneously being slashed this month by the Conservative government of Prime Minister David Cameron. Which only begs the question: Will there be a British equivalent of The Beckster?)