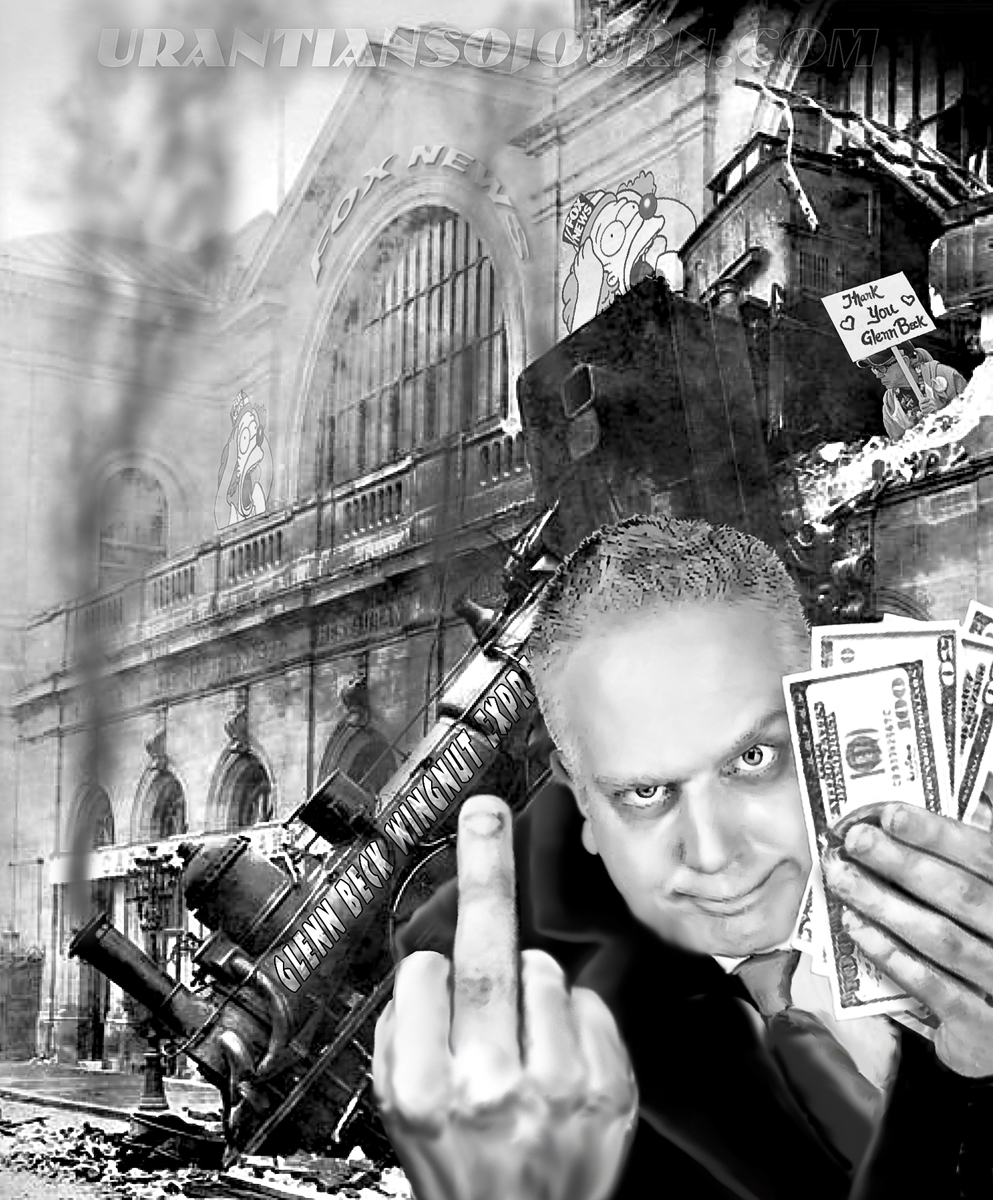 Engineer Glenn runs off the rails

In a post titled The Nutty Professor: The Rise & Fall of Glenn Beck, published a couple of days before Fux News announced that they were dumping his show, it might have appeared that we had jumped the Beckian shark a bit soon by asserting his demise as a fate accompli.

But it wasn’t a prophetic reading of tea leaves or goat entrails that led us to that conclusion. (Though it’s hard to imagine that gutting a goat and sorting through its yuck could be any worse than having to endure an entire hour of a Beck Fux TV show). Rather, there were plenty of harbingers.

I recall tuning into his radio show some two years ago during which he promised he would never, ever abandon his dear listeners, hinting at some deep, dark conspiracy to force him off the air. Who exactly was behind such a dastardly plot? Secret agents of the coming Muslim Caliphate, perhaps?  Acorn? The man who Beck calls The Puppet Master, billionaire financier George Soros, determined to force socialism, communism, fascism and Eastern European food down our throats? Beck wouldn’t say, though he did encourage his audience to sign up for his newsletter, called– I kid you not, Insider Extreme— for a mere $6.26 a month, lest they never find out.

That was before The New York Times reported in August ’09 on the campaign of a then obscure group called The Color of Change to educate Beck’s advertisers as to his insane, paranoid, racist rants and how they would negatively impact their brands. TCOC would eventually succeed in giving Beck a dose of his own medicine, convincing some 400 advertisers to put their money elsewhere, costing Murdoch of Mordor and his stockholders over $40 million in lost prime time revenues.

Beck used the electronic megaphone Fux gave him to launch a series of ruthless attacks on progressives that included the community activist oriented Acorn, who helped find food, housing, and daycare for the poor while helping them to become responsible citizens by registering them to vote; the environmental activist foundation, The Tides Foundation, which, among other things, wrote an expose on a nuclear core meltdown and radiation release in The San Fernando Valley in the late ‘50s; alternative energy promoter and former Obama Administration consultant, Van Jones; champion of rural farmers Shirley Sherrod; and of course the uber manipulator behind them all, the infamous Nazi sympathizer, George Soros.

But it wasn’t Beck’s attacks against secular progressive that brought him down. I mean, who cares about the Dirty Fucking Hippies; certainly no one in D.C. or the M$M. But when Beck equated Reform Judaism, known for their liberal support of democratic institutions, with radical Islam on his radio show six weeks ago, that apparently was the straw that broke the camel’s back, prompting Murdoch to cut his losses.

I concluded The Nutty Professor with:

In a classic example of life imitating art,  worth repeating here in light of the yesterday’s passing of Hollywood legend, Sidney Lumet, who directed the film Network, Beck shared the exact same  fate of the movie’s fictional media superstar, Howard Beale. Future editions of the Diagnostic and Statistical Manual should  include Beck’s picture under the entry for malignant narcissistic personality disorder.

For those who haven’t had enough of Beck yet,  Media Matters supplies a retrospective of The 50 Worst Things Glenn Beck Said On Fox News. And this week Jon Stewart did his usual brilliant job of satirizing Beck’s manic mannerisms and mutilated messianic messages, found here. (Okay, alliteration switch off now.)

But before we all start dancing on Beck’s grave and singing Ding Dong The Warlock of Fear is Dead, we need to step back and assess the cascading damage he’s already done to our society. Which is exactly what Will Bunch has done in his must read post at HuffPo yesterday titled:

…But I think that progressives might want to hold off on that victory lap — unless it’s to get in better shape for the long battle ahead.

Because the truth is that Beck’s ouster isn’t really the end of the nightmare, but just the beginning of the end. Over the last 27 months, Beck — and let’s be clear that he had a lot of help from the likes of Rush Limbaugh and Sarah Palin and Sean Hannity and Rand Paul and all the folks in the Tea Party Movement — managed to do incalculable harm to the American body politic, that Beck was exactly like Tom and Daisy Buchanan in The Great Gatsby who “smashed up things and creatures and then retreated back into their money or their vast carelessness.”

You’ll probably hear a lot about how Beck coarsened the political debate and how his words may or may not have incited violence, but I think the wreckage is a lot more substantive, to actual policies that affect Americans every day. You see, there was a reason that Beck was so fond of a political theory called the Overton Window — so enamored, in fact, that he made it the title of his (officially) fictional “thriller” novel last summer.  The Overton Window is a notion that you can radically move the parameters of political debate by pushing talk to the outer limits, so that ideas that were once deemed as extreme suddenly appeared to be normal.

Ironically, no one mastered the use of the Overton Window better than Beck. With all the focus on the leading edge of Beck’s craziness — the “caliphate” stuff, the flirtation with “the FEMA camps,” or President Obama’s “deep-seated hatred” of white people — it’s easy to forget how he rationalized once out-there ideas to millions of American conservatives, and how those ideas became ingrained in the Republican agenda that has thwarted progressivism from virtually the day Obama took office.

Bunch illustrates just how far right Beck and his ilk has pushed the electorate to Teh Crazy by citing the issue of climate change:

…There was a time when mainstream Republicans like John McCain, Lindsey Graham, and Tim Pawlenty thought that man-made climate change was a real problem and that government had a role in fixing it. Then Beck and friends on Fox News Channel and in talk radio went to work. Beck’s role in all this is remarkably cynical, as he told USA Today Weekend that he personally believed in climate change — “you’d have to be an idiot not to notice the temperature change,” he said — but said the complete opposite on the air. “Americans know this global warming thing is a scam,” he proclaimed on the radio.

In 2007, 62 percent of Republicans believed in man-made climate change, but by late last year 53 percent of GOP voters said there is no evidence for it. In Delaware, a band of Beck aficionados called the Delaware 9-12 Patriots played a key role in ending the Senate ambitions and political career of moderate Republican Mike Castle, largely because Castle had voted for the anti-global warming plan known as “cap and trade.”

Do you think other Republicans took notice of Castle’s fate? Last month, the House Energy and Commerce Committee was asked to accept an amendment to a bill confirming that man made climate change is real. The voted among the GOP majority was unanimous — 31 votes against global warming.

I can’t think of a single issue more important to present and future generations than a warming planet that will create tens of millions of climate refugees, wars over vanishing natural resources like potable water and arable soil, mass pandemics, and radically changing and ever more violent weather changes. Just this week, The British Medical Journal published a joint report by medical and military leaders titled:

“Climate change poses an immediate and grave threat, driving ill-health and increasing the risk of conflict, such that each feeds upon the other,” they write in an editorial published on bmj.com today. Their views come ahead of an open meeting on these issues to be held at the British Medical Association on 20 June 2011.

The authors point to several reports, highlighting the threat that climate change poses to “collective security and global order.”

For example, the Pentagon’s 2010 Quadrennial Defense Review to Congress stressed the potential for climate change to contribute to “poverty, environmental degradation, and the further weakening of fragile governments.”

A recent report by the International Institute for Strategic Studies concurs: “Climate change will increase the risks of resource shortages, mass migration, and civil conflict. These could lead to failed states, which threaten global stability and security.” It stresses the need for “sustained investment in infrastructure and new technologies” of which “a shift to renewable energy sources will be the most visible effect of efforts to mitigate emissions.”

One of the ways of limiting carbon emissions is to get people out of their cars and out of airplanes by building high speed rail.  But leave it to Beck and his fellow media wingnuts to warn against that deadly fascist, totalitarian plot. Bunch again:

But then, Beck has the GOP going off the rails on a crazy train, literally. In other industrialized capitals from Paris and Beijing, high-speed rail is seen as a futuristic way to grow the economy with the kind of a zeal that a very different America once held for its space program. But now the political tide has turned against high-speed rail, with talk radio leading the charge, characterizing scheduled train service as a form of totalitarianized mind control. Beck summed up the far-right mantra on trains earlier this year when he said: “The trains run on time and there’s a schedule — and you’ll obey us and go where we want.” It would be laughable — except it came just as newly elected Tea-Party-darling governors Scott Walker in Wisconsin, John Kasich in Ohio and Rick Scott in Florida killed high-speed rail projects that would have brought federal dollars, and more importantly jobs, to residents of their recession-battered states.

Unfortunately, while the The Great Glenn Beck Train Wreck may have lost its engineer, the rest of us passengers are still along for Mr. Toad’s Wild Ride.