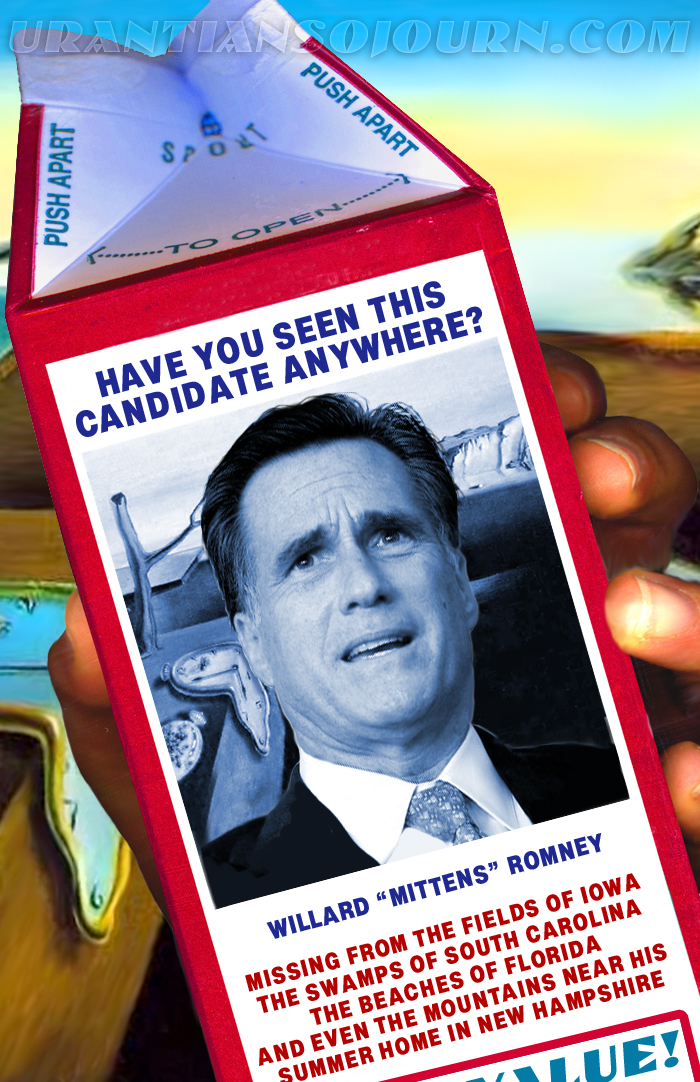 Is Mittens hiding out in Cheney’s old bunker?

BEN SMITH at Politico writes that GOP presidential candidate Mitt Romney has been missing in action:

Call it the Mittness Protection Program.

Through the hot summer of 2011, the front-runner for the Republican nomination has been in hiding.

Romney was hit repeatedly by his opponents and the Democrats for refusing to offer an opinion on the debt deal until twelve hours after Congressional leaders accepted it – but that’s just been the most obvious example of a campaign that’s keeping the candidate far from the front lines and the headlines…Since his June 2 campaign launch, he’s done only about 24 public or semi-public events – an average of slightly more than one event every three days, or well below half the rate of Republicans Tim Pawlenty and Jon Huntsman. That includes just one last week. He has none scheduled for this week.

Those numbers, if anything, slightly exaggerate the time his campaign has devoted to retail appearances in Iowa, New Hampshire and South Carolina. Romney has been acting more as a full-time fundraiser and occasional candidate, and many of his stops — like the most recent two in Los Angeles and Ohio — are tacked on to his fundraising schedule…

Dang, I miss Mitten’s fanfare for the common man touch. Like when he was hangin at the Buddy Brew Coffee house in Tampa in June, talkin shit with the locals.  As The New York Times  recounts:

Mitt Romney sat at the head of the table at a coffee shop here on Thursday, listening to a group of unemployed Floridians explain the challenges of looking for work. When they finished, he weighed in with a predicament of his own.

He chuckled. The eight people gathered around him, who had just finished talking about strategies of finding employment in a slow-to-recover economy, joined him in laughter.

“Are you on LinkedIn?” one of the men asked.

“I’m networking,” Mr. Romney replied. “I have my sight on a particular job.”

The morning coffee hour at Buddy Brew Coffee here on West Kennedy Boulevard was interrupted by a conversation about small businesses and job creation as Mr. Romney finished a three-day swing through Florida. While his visit was largely focused on fund-raising, he spent more than an hour promoting his pitch that he would be a stronger steward of the economy than President Obama.

But any of the bravado that accompanied him in the wake of his first presidential debate on Monday in New Hampshire — he vowed to return to the state in four years, accompanied by a Secret Service detail — was absent. He took a humble, self-deprecating approach.

“I wish I had a job for everybody,” Mr. Romney said at the end of his discussion. He added, “I may be unemployed for longer than I’d like.”

Yeah, I’m sure that’s what he told all those poor suckers who lost their jobs when he headed up Bain Capital, a vulture capital firm that specialized in bankrupting companies after sucking all the equity out of them. Bloomberg reports:

At Dade Behring Inc., a medical-testing company based in Deerfield, Illinois, Bain cut at least 1,600 jobs during a series of acquisitions before the firm entered into bankruptcy in 2002. Romney foreshadowed those cuts in a speech to employees shortly after Bain acquired the firm.

DDi Corp., an electronics company in Anaheim, California, filed for bankruptcy in 2003 after Bain sold shares in the company generating at least $85.5 million and billed $10 million in management fees.

In this dawning of the Age of Austerity,  Mittens is the GOP’s perfect man for the job.

I do hope he gets out more, though.