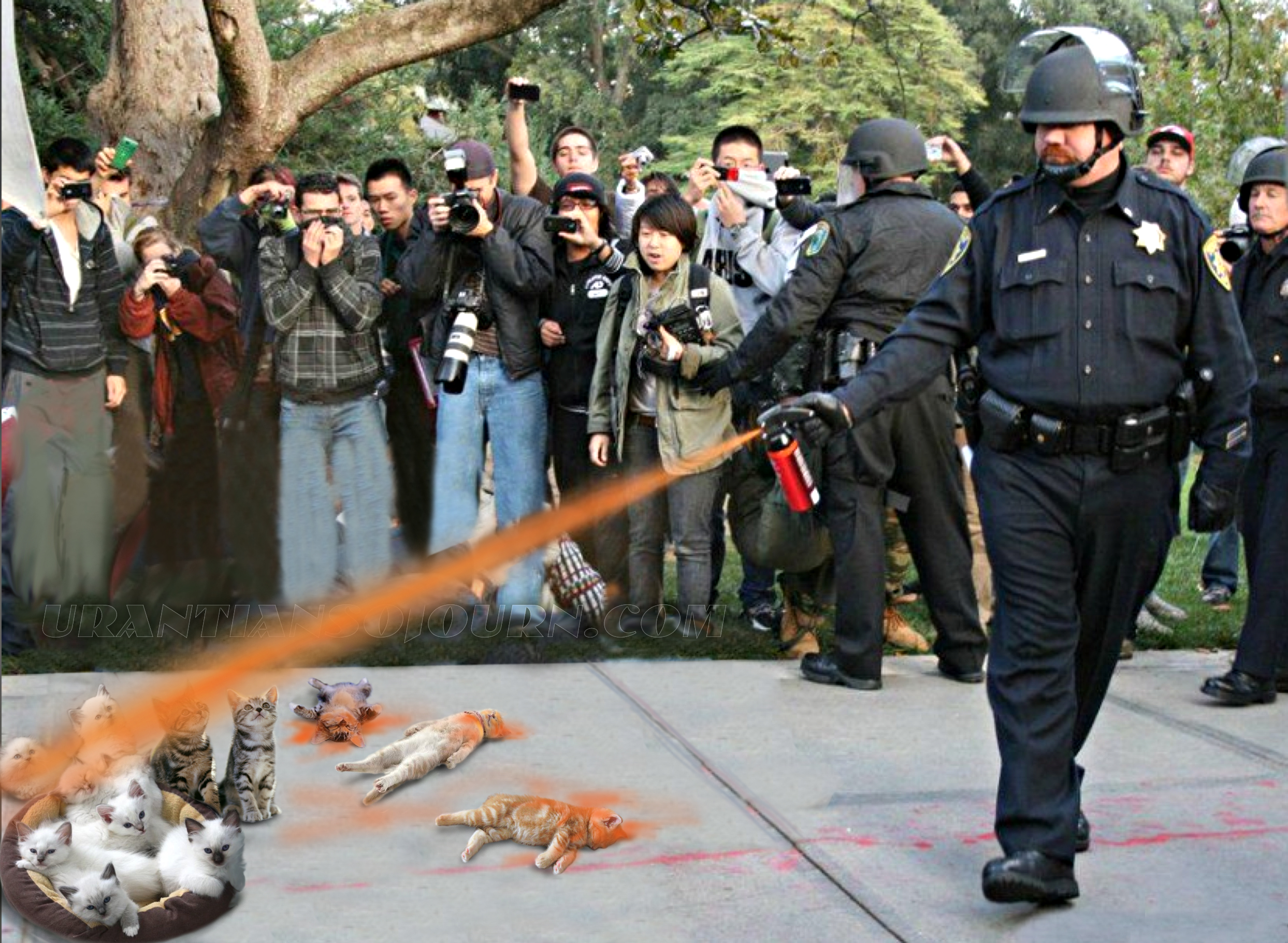 Dozens of  kittens who had peacefully gathered on a UC Davis sidewalk were assaulted with Oleoresin Capsaicin (Pepper) Spray by the Campus police, early Wednesday.  Oh wait— those weren’t kittens— they were America’s children. . .

It’s been some 40 years since I last referred to a police officer as a “pig.”  Raised with a healthy respect for law enforcement, all that changed radically in 1969 when I witnessed  an incident of unconscionable police brutality.

What brings this unfortunate porcine imagery to mind are the now viral videos of two UC Davis police officers methodically pepper spraying student demonstrators as they sat peacefully expressing their First Amendment in solidarity with their UC Berkley brethern in particular, and the larger OWS 99% movement in general.

No one is likely to suffer more from today’s huge disparity in wealth between the top 1% and the 99% than today’s college students. They’ve played by the rules, put in the interminable hard hours of class attendance and study. They’ve incurred tens of thousands of dollars of non-dischargable debt,  expecting that when they graduated they would land a job commensurate with their efforts in short order, if  for no other reason than to discharge that debt.

Instead, many of them have been forced to move back in with their parents, with little prospect for immediate or even mid term employment. And as the reality of becoming indentured servants of the EIC (Eductional Industrial Complex) is dawning on them, they are taking to the streets in protest.

Monday on Lawrence O’Donnell’s The Last Word, Michale Moore called this macing of 11 students an iconic moment that is resonating around the world.  Moore asks: When are the police going to start arresting the real criminals?

Indeed. Let’s look at the math. Take the current number of arrested protesters as A;  the number of Wall Street crooks responsible for the greatest economic crash since the Great Depression as B; subtract B from A, and the answer is—wait for it–  A.

The M$M continues its pearl clutching, feigning confusion over what all these protesters could possibly be protesting.  Fux News chooses to cast them as just the latest incarnation of the Dirty Fucking Hippies, a meme that the political psychopath Newt Gingrich echoed while stuffing his ample gullet at a “family values” conference Saturday in Iowa, telling protesters:

While Gingrich and his ilk might succeed in obscuring the issue of wealth inequality that exists today between the top 1% and the bottom 99%  in what used to be known as The Land of Opportunity,  an issue that the masses more readily comprehend is accountability.  The title of Prof Juan Cole‘s blog last Friday pretty well sums it up:  OWS under Pressure: Banks Bailed out, People Sold Out.

Three years after the banksters received their Get Out of Jail Free cards from the Bush and Obama Administrations, the issue of accountability has shifted to politicians and administrators like Jean Quan, the Mayor of Oakland. Quan found herself scrambling to keep her job last month after her police nearly turned a peacefully protesting Iraq war veteran named Scott Olsen into a vegetable after he was shot in the head with a tear gas canister.

In the wake of the pepper spraying incident noted above, it was the Chancellor of UC Davis, Linda Katehi, who was trying to hang on to her job after the university’s faculty association called for her resignation and over 50,000 people signed a petition demanding that she go.  As TPM reports it:

…Chancellor Linda Katehi told ABC’s Good Morning America on Monday that she’s staying put.  “I really feel confident at this point the university needs me,” she told GMA (video here). “There are so many critical issues to be addressed and we really need to start the healing process and move forward.” 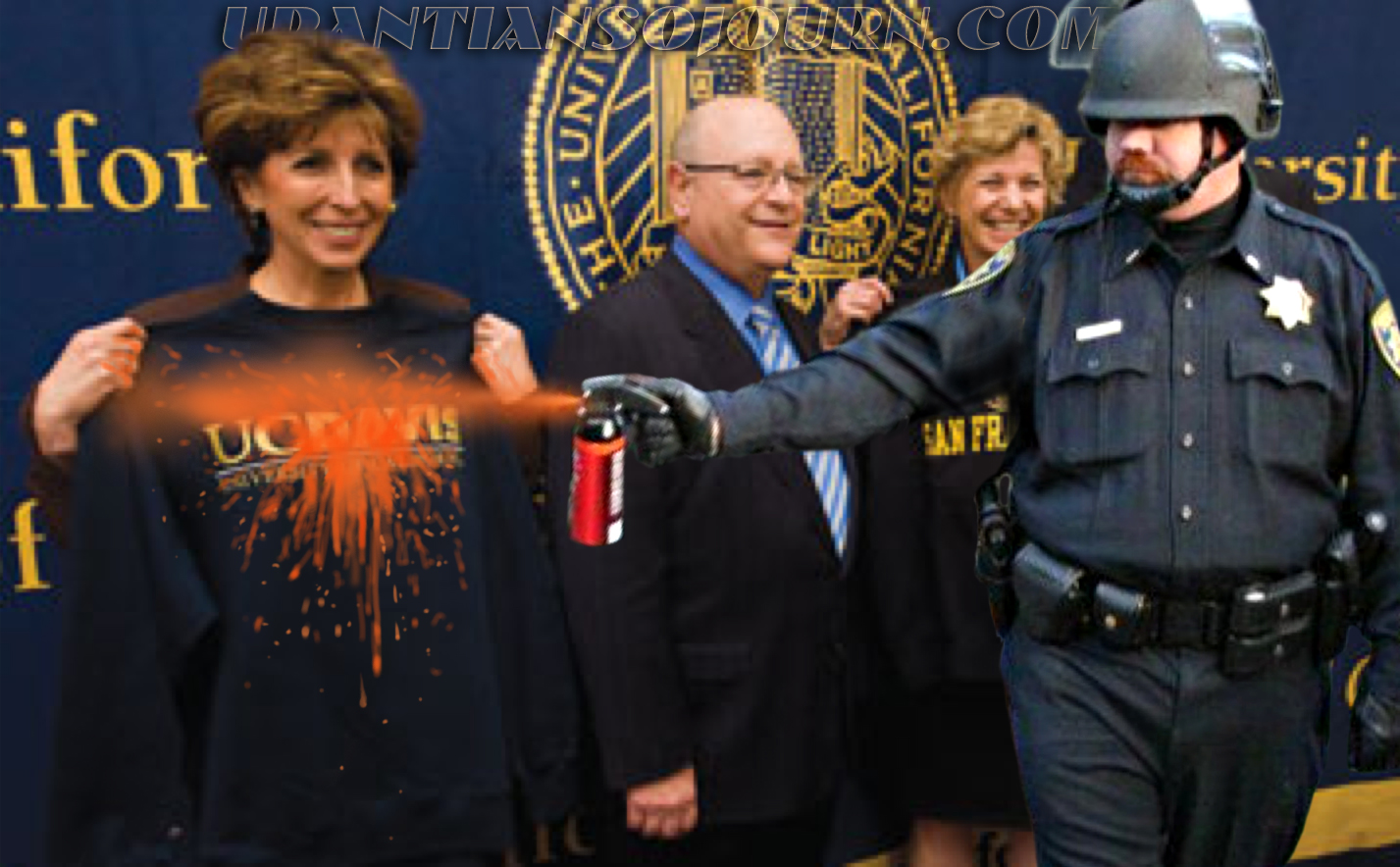 Yeah, the university “needs” her like Lt. Puke needs a recharge of his pepper spray canister, and a new litter of kitties to practice on.

UPDATE  [11/19]  Garance Franke-Ruta over at The Atlantic reminds us that the UC Davis macing was not an isolated event.